‘We find our own path through the jungle’ 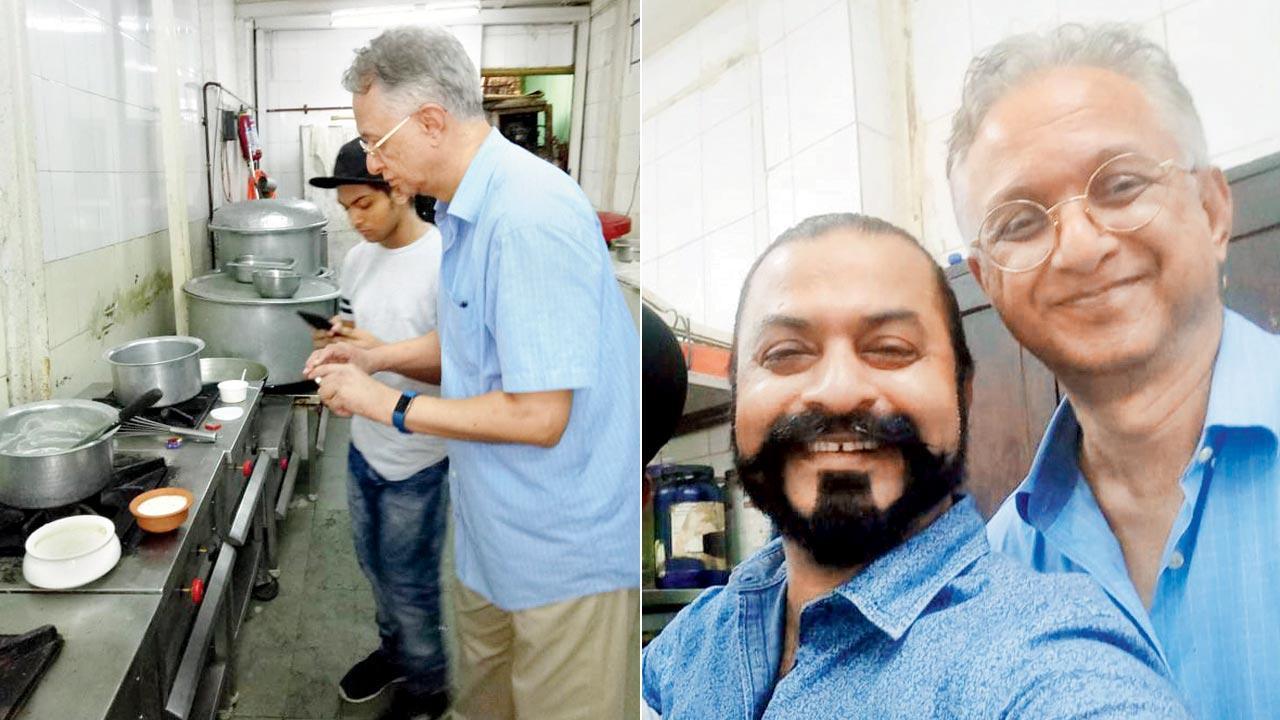 Gopi creating a meal with lavender as the main ingredient in Ishtiyaque’s kitchen in 2017; Ishtiyaque Qureshi (left) and CY Gopinath

They unite exclusively over meaty meals. CY Gopinath (Gopi), now settled in Thailand, considerably contoured Bombay’s journalism scene from 1979 to 2000. Celebrity chef Ishtiyaque Qureshi, whose ancestors stirred the fires of Awadhi Nawabs from two centuries ago, can never be confined to a menu. The Kebab King’s djinn-like powers stretch beyond shaping lauki mussalam like a fish or presenting kathal (jackfruit) biryani, delicious enough to leave diners wondering how it cannot be mutton. 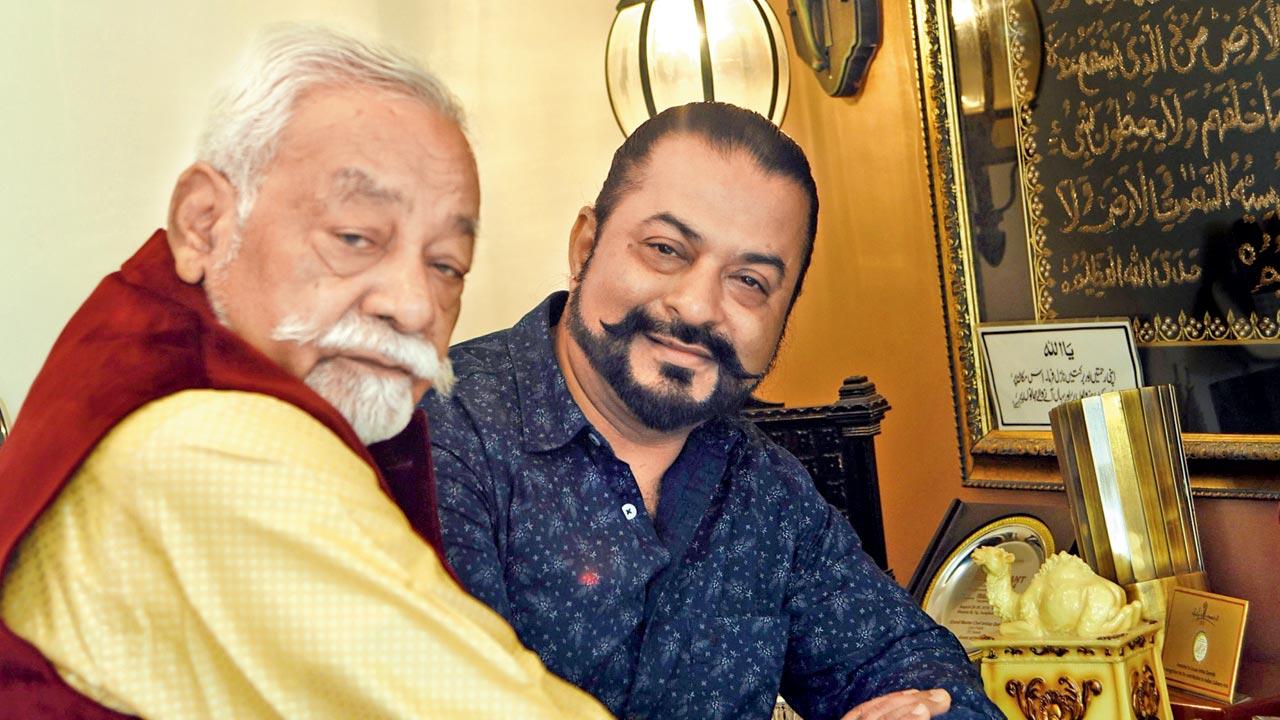 Ishtiyaque with his father Imtiaz Qureshi, who put North West Frontier cuisine on the culinary map

With Kakori House outposts across town, Ishtiyaque honours his forebears who distinctively perfected the culinary art of Dum Pukht, the style that cooks food in its own juices, sealing the pot edges with dough (dum is “closed vessel”, pukht is “refined”). His father, Padma Shri Imtiaz Qureshi, founded the Bukhara and Dum Pukht restaurants at the Maurya Sheraton, Delhi. Believing that tehzeeb and tehseer ideally combine for a proper appreciation of dishes—tehzeeb being the civilised way food is served and tehseer its effect on health—Ishtiyaque ensures that his vegetarian delicacies like kebab-e-tanzeel are as craved by meat lovers.

Reviewing his friend’s flair, Gopi once wrote in The Bombay Times: “Ishtiyaque Qureshi controls food. If he doesn’t want his onions to brown just yet, they will patiently await further instructions. If he wants the garlic to go to sleep, it will go to sleep, pretending it’s an almond… I was delighted to be his guinea pig in experiments. In one he served what seemed like an almond kheer, except the ‘almonds’ were pods of garlic whose ego he subjugated by careful ministrations in simmering milk, converting them into something nawabi and aristocratic.”

CY Gopinath: We first met at the Dum Pukht restaurant in what used to be Sea Rock Hotel in Bandra. Ishtiyaque’s father Imtiaz Qureshi had introduced Lucknowi dum cuisine at ITC’s Maurya Hotel in Delhi and it was all the rage. Writing about the restaurant, I had a few words with Ishtiyaque.

Ishtiyaque Qureshi: Rewinding a bit… When I was 12, during school holidays my father skilfully lured me to the Maurya operations. With temptations of swimming in the pool and eating at the bakery, kitchen mein bhi daal diya. Fond of science, I put that interest to use. Fermentation and radiation are processes vital to cookery. I applied to college, but my father insisted I joined work immediately and I went to Jeddah in 1986. On returning, I interviewed with ITC’s Chairman, YC Deveshwar in 1989 at Delhi’s Maurya Sheraton and found myself at Dum Pukht, Bombay. Their marketing department invited journalists to the restaurant. That’s how Gopi came. Another well-known critic then was Jiggs Kalra with his Evening News column, Platter Chatter.

CYG: Ishtiyaque’s culinary inventiveness drew me to him. He has an infectious enthusiasm when talking about food. Or new recipes experimented with—such as a dessert milk pudding with—of all things, garlic. Through hours of slow cooking, he subdued the garlicky taste, describing it in unforgettable Urdu: “Lahsoon ko doodh mein shaheed karna padta hai.” So that was the Martyred Garlic Milk Pudding. There were others like this.

IQ: Bombay appealed despite the working situation growing bad with Datta Samant’s union demanding “Dilliwale murdabad”. I especially liked Bandra with coastal parks like Joggers, and different friends I could make in the city, like Gopi.

CYG: I’ve mainly met Ishtiyaque in kitchens and restaurants. The only other time was at a farewell party we threw when I moved with my family to work in Africa. Ishtiyaque gifted me a tandoor grill he designed himself and came over to deliver it.

IQ: My upbringing has been all about the importance of aadaab. Manners. The added openness to adapt is thanks to people like Gopi, who’ll say, “Kuch naya karo.” When he was here from Bangkok in 2017, he and I prepared a full feast of ustukhuddus, or lavender: lavender kheer, chicken in lavender and meat chops in lavender.

CYG: He’s a good sport, always game to go where others hesitate. I admire his willingness to fool around with new recipes, combinations and flavours. I worked for a year at Reader’s Digest, after five years in the legendary JS magazine of Calcutta. But after that I just branched out, like Ishtiyaque, finding my own path through the jungle.

A lone eagle doing his own thing while younger siblings have salaried jobs in hotels, Ishtiyaque has been the family “black sheep”, but in a good way. I believe he is his father’s favourite. Now, with his handlebar moustache, he even looks like his father.

IQ: Amazingly, Gopi stays calm through the shor sharaba of kitchens. I’m impatient and restless. He keeps me measured, cool.

CYG: Our meeting is very erratic. We got in touch recently after years of disconnection. Whenever I’m in Mumbai, I try see if he’s around and free. When we do meet, it’s instantly congenial and the years melt away. Like picking up a conversation where you have left it.

IQ: Gopi’s creativity with words and ideas is brilliant. Kakori House is dedicated to the world’s softest seekh kebabs. With the Deonar abattoir closing, lockdown, unavailability of mutton and the big issue of no beef, I was keen to make a different red meat item with chicken—majboori thi. Gopi hit upon Murgori: simple, crisp, to the point. And also drew a unique brand design for it.

CYG: I’ve lived outside India for too long—16 years in Bangkok, six in Africa—to be knowledgeable about the Mumbai food scene. Ishtiyaque has recently created his difficult chicken kakori kebab, which I suggested he call Murgori. That’s sure to be disruptive in the world of grilled meats.

Next Story : The life and times on Dufferin