What does it mean to be free?

Recently, a Kolkata professor was forced to resign over her photos in swim and gym wear, posted on her private account; it’s a reminder of the patriarchal male gaze that shapes the identity of women in India 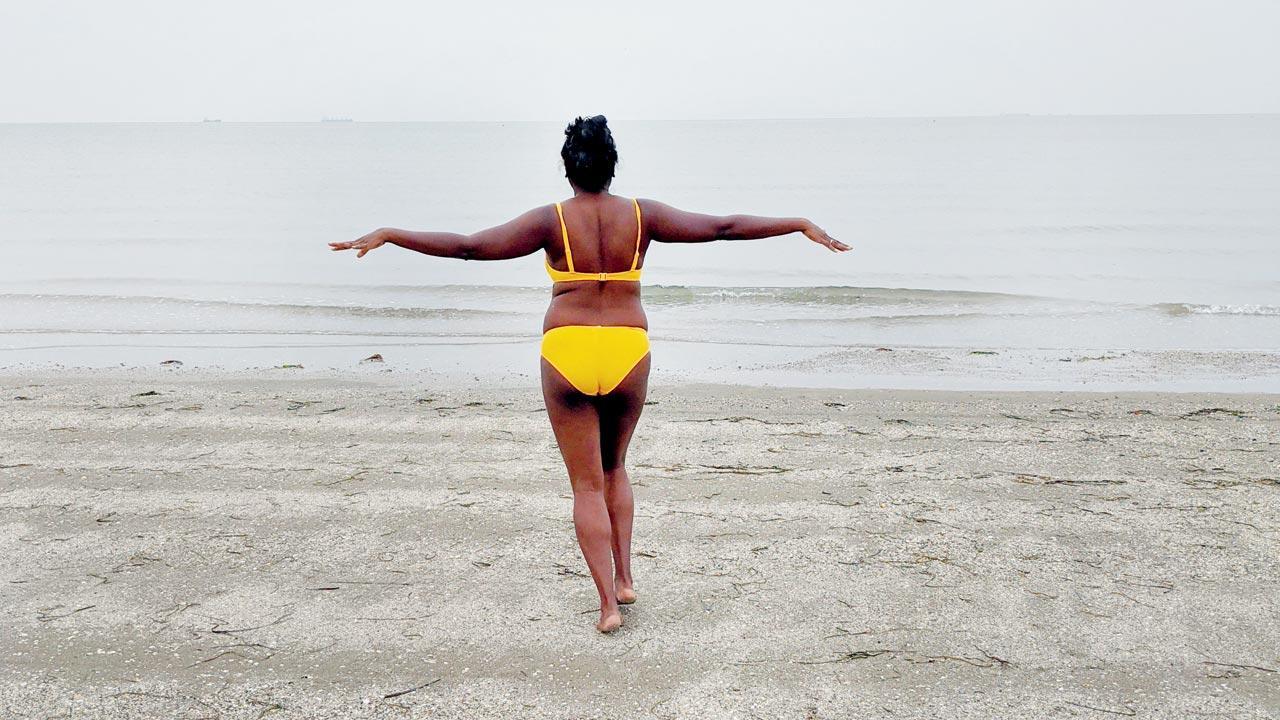 A photograph from July 2021, when I was pregnant, in a two-piece bikini on the beach in Venice. Pic/Rosalyn D’Mello

When asked what freedom meant to her, Nina Simone, in a 1968 interview, first evaded the question, deflecting it back at the interviewer. She says it’s a feeling, and how do you describe a feeling? How do you explain to someone, who may not have experienced it, what it’s like to be in love? She says she has felt it sometimes on stage. Freedom. Finally, she arrives at it. “I’ll tell you what freedom means to me. No Fear!” Her voice has remained in my head for years, perhaps since I first fell into my obsession with her when I was about 18 or 19 or 20, when a Canadian person I’d met gifted me a CD of her best songs. There’s a simplicity to her definition, and yet I’ve never gotten over all its possible connotations.

I was thinking back this week to all the flag hoisting ceremonies I attended all my school life, and all the speeches I listened to about freedom or independence. Because this year marked the 75th year of Indian independence from British colonialism, I returned to her definition, because it seemed to suggest the antithesis of the prevailing social climate.

The news of the female professor at St Xavier’s College in Kolkata being fired because a student’s parents filed a complaint against her for posting photographs of her wearing swim and gym wear on her private Instagram account really killed any Independence Day buzz I might have had going. The letter by the parents noted that “it is obscene, vulgar and improper for an 18-year-old student to see his professor dressed in scanty clothes exhibiting her body on a public platform”. The extent of the parochial-patriarchal-mindedness of the complaint’s tone continues to anger me. That the college authorities should decide to side with the parents and not the teacher stoked my rage. It felt emblematic of the various forms of policing a female body in India remains subjected to, which is why the celebration of our alleged independence and freedom within the continuing legacies of colonialism and patriarchy feels like hypocrisy.

I began to think about my own life, and how so much of my identity had been formed within the shadows of all the gazes that oppressed me. Even as a young girl, my body was not spared the constant scrutiny, and when I think back to how I was policed from the time I was possibly still learning to speak, it makes me sick to reflect on how female bodies are sexualised from infancy even. I went to St Xavier’s College in Mumbai at a time when the principal actively walked the corridors policing female bodies, chastising you for inappropriate behaviour, and actively disallowing you from entering the space if you were seen as not following the dress code. For a long time, I believed that people (other women) only took you seriously as an adult if you were married with kids, but the last few months have proven otherwise. I am part of a few Facebook groups that primarily function as support groups for Indian mothers, and many of the accounts that I read there shake me to my core. So many mothers-in-law who infantilise their daughters-in-law, forcing them to believe their milk supply isn’t good enough; women who are going through intense postpartum depression because they simply are not given the kind of support for which they are aching. Some accounts read as clear cases of domestic abuse, even though there is no physical violence. I shudder to think about the mental health status of so many women who are being traumatised through their experience of motherhood.

I have often wondered what it could be like to not fear, to feel the exhilaration of boundlessness, to feel like one can try out things and fail, even, without the threat of admonishment. I also think about the link between fear and shame. As I navigate motherhood, I have been actively protecting our child from experiencing the stigma of shame.

Why cannot the body just be left alone, I often ask? Why does it always have to be remarked upon or clothed to maintain some Victorian notion of decency? What is so terrifying about a female body that has agency over its domain? Why did it take me so many years to feel comfortable enough to even wear a two-piece bikini? I wondered what it would have been like to have had a professor who didn’t carry that shame, who claimed her body as belonging to her alone. That this level of empowerment should be punished with forced resignation really upset me.

I don’t know what the 80th year of our independence will look like, but if I could wish for one thing, it would be for more women to experience freedom from the burden of all the shame that has been dumped upon us for centuries. Enough is enough.

Deliberating on the life and times of Everywoman, Rosalyn D’Mello is a reputable art critic and the author of A Handbook For My Lover. She tweets @RosaParx