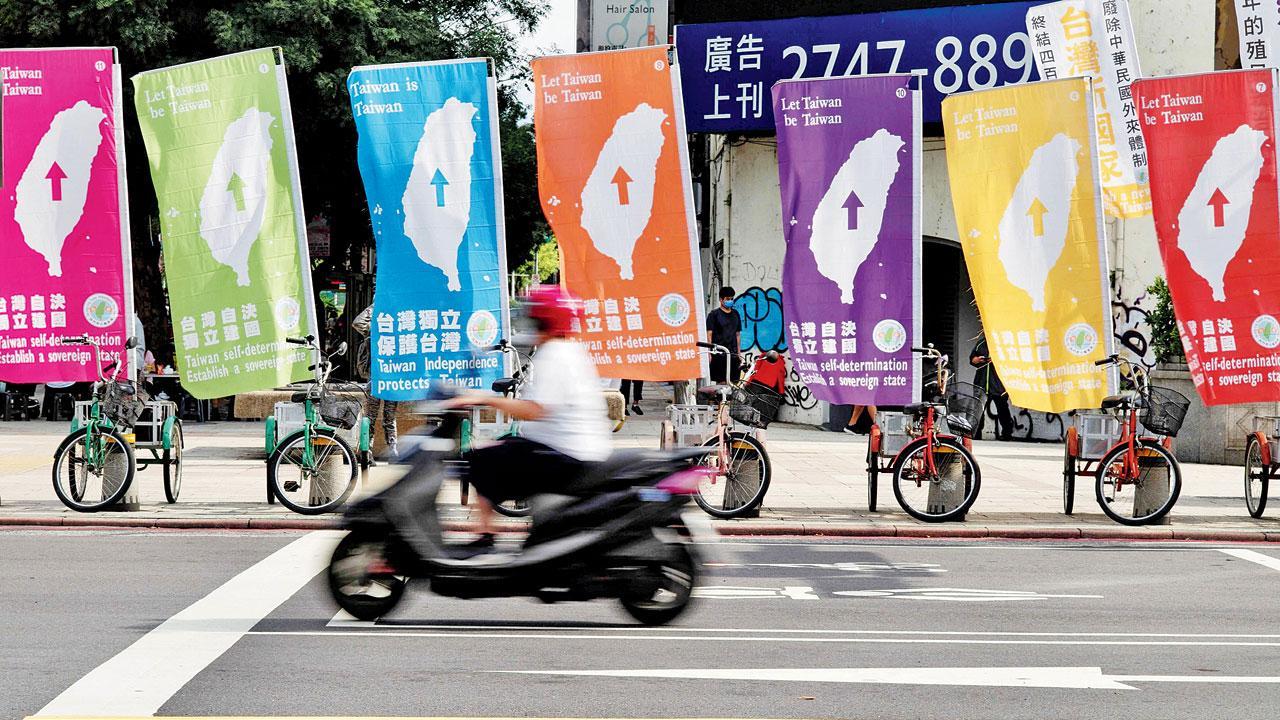 A motorcyclist rides past pro-Taiwan independence flags. Taiwan accused the Chinese of simulating an attack on its main island on August 6. Pic/AFP


Taiwan said Saturday that China’s military drills appear to simulate an attack on the self-ruled island, after multiple Chinese warships and aircraft crossed the median line of the Taiwan Strait following US House Speaker Nancy Pelosi’s visit to Taipei that infuriated Beijing.

Taiwan’s armed forces issued an alert, dispatched air and naval patrols around the island, and activated land-based missile systems in response to the Chinese exercises, Taiwan’s Ministry of National Defense said on Twitter. China launched live-fire military drills following Pelosi’s trip to Taiwan earlier this week, saying that it violated the one-China policy. China sees the island as a breakaway province to be annexed by force if necessary, and considers visits to Taiwan by foreign officials as recognising its sovereignty. Taiwan’s army also said it detected four unmanned aerial vehicles flying in the vicinity of the offshore county of Kinmen, Taiwan’s news agency reported.

The four drones, which Taiwan believed were Chinese, were spotted over waters around the Kinmen island group and the nearby Lieyu Island and Beiding islet, according to Taiwan’s Kinmen Defense Command. Taiwan’s military fired warning flares in response. Kinmen, also known as Quemoy, is a group of islands only 10 kilometres east of the Chinese coastal city of Xiamen in Fujian province in the Taiwan Strait, which divides the two sides that split amid civil war in 1949.

“Our government and military are closely monitoring China’s military exercises and information warfare operations are ready to respond as necessary,” Taiwan’s President Tsai Ing-wen said in a tweet. “I call on the international community to support democratic Taiwan & halt any escalation of the regional security situation,” she added.

The deputy head of Taiwan defence ministry’s research and development unit was found dead on Saturday morning in a hotel room, succumbing to a heart attack. Ou Yang Li-hsing, 57, deputy head of the military-owned National Chung-Shan Institute of Science and Technology, had died in a hotel room that showed no sign of any ‘intrusion.’ Ou Yang was on a business trip to the southern county of Pingtung.