In the latest easing of COVID-19 restrictions, primary and secondary school grades return to classrooms as well 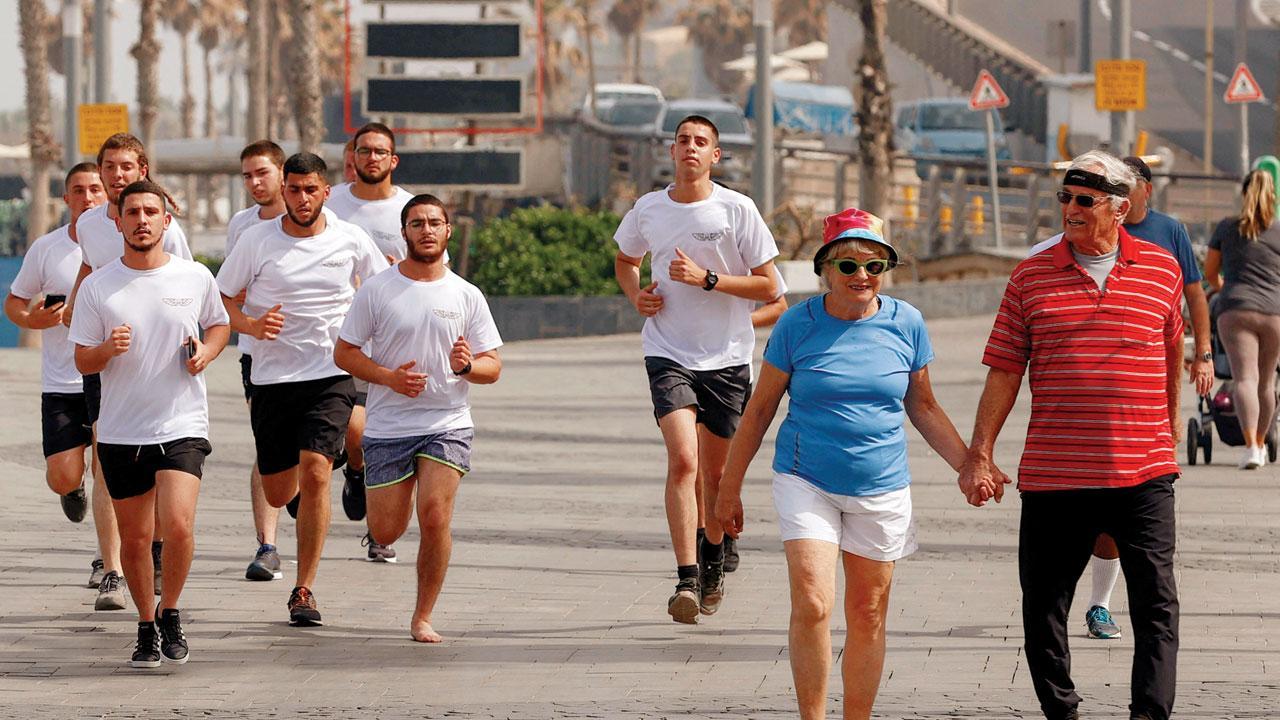 People exercise on a street in the Israeli coastal city of Tel Aviv. Pic/AFP


Israel has lifted a public mask mandate and fully reopened its education system in the latest easing of Coronavirus restrictions following its mass vaccination drive. All primary and secondary school grades returned to classrooms on Sunday, and health officials ended a year-long requirement to wear a mask in public spaces. Masks are still required indoors and in large gatherings.

Israel has speedily inoculated a majority of its population against the Coronavirus in a world-leading vaccination campaign. It has lifted most of its Coronavirus restrictions and announced last week that it would be reopening the country to vaccinated foreign tourists starting in May.

Israel’s Coronavirus czar, Nachman Ash, told Israeli public radio on Sunday that removing the mask requirement outdoors and reinitiating in-class studies was a “calculated risk.” Since the start of the pandemic last year, Israel has recorded over 836,000 cases of the Coronavirus and at least 6,331 deaths, according to the Health Ministry.

Over 53 per cent of its 9.3 million citizens has received two shots of the Pfizer/BioNTech vaccine. In the months since Israel launched its vaccination campaign in December, serious cases and deaths have fallen precipitously and allowed the economy to fully reopen. The vaccination campaign in the Israeli-occupied West Bank and Gaza has been slow to get off the ground, with Israel facing criticism for not sharing more of its supplies.

The French government on Sunday announced the tightening of entry restrictions from Argentina, Brazil, Chile and South Africa because of concerns about new variants of the Coronavirus. A 10-day compulsory quarantine will apply to people entering the country from these countries starting from next week, reports dpa news agency. The measure will also apply to air travellers from its overseas territory of French Guiana.

Pakistan’s National Command and Operation Centre (NCOC) has announced its decision to start the vaccination of people in the 50-59 age group against COVID-19 from April 21, it was reported on Sunday.

The regional health authorities in Italy’s Lombardy region have said that public confidence in the country’s use of the AstraZeneca COVID-19 vaccine has been hindered by the jab’s safety fears. Giovanni Pavesi, director-general of the Lombardy Region Welfare Department, said on Saturday that reports of health concerns tied to the AstraZeneca vaccine have resulted in people turning it down, reports Xinhua news agency.

‘Australians can travel, quarantine on return’

Vaccinated Australians could be allowed to travel overseas and quarantine at home on their return before the “vast majority” of the population has been inoculated against COVID-19, a minister said on Sunday. As of Sunday morning, there has been 1.48 million vaccines administered in Australia, reports Xinhua news agency.