The drugmaker hoped to deliver 80 million doses in the first quarter of 2021, but only 30 million were sent; it is now set to provide 70 mn doses in the second quarter, instead of 180 mn it promised 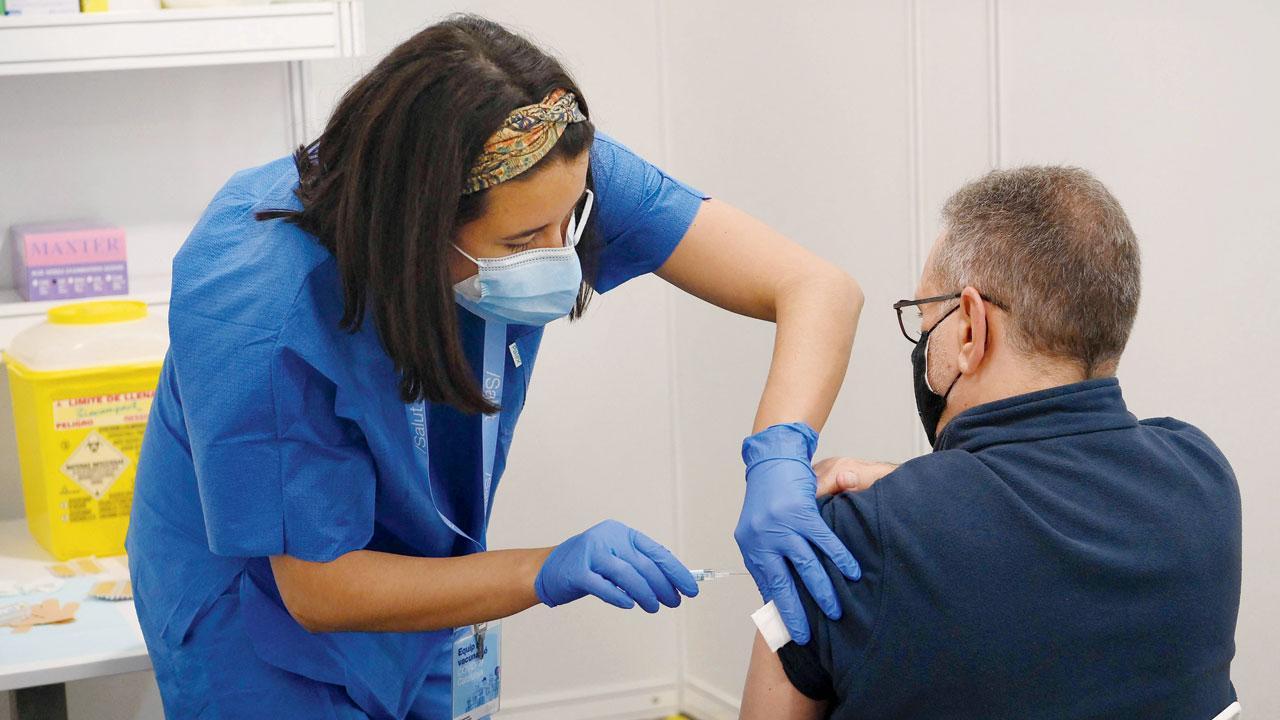 A man receives a dose of the AstraZeneca’s COVID-19 vaccine at a vaccination centre on April 26 in Barcelona. Pics/AFP


The European Union’s executive branch said on Monday that it has launched legal action against coronavirus vaccine-maker AstraZeneca for failing to respect the terms of its contract with the 27-nation bloc.

The AstraZeneca vaccine has been central to Europe’s immunisation campaign. European Commission spokesman Stefan De Keersmaecker said Brussels launched the legal action against AstraZeneca last Friday “on the basis of breaches of the advance purchase agreement.”

He said the reason for the legal action was that “some terms of the contract have not been respected” and that “the company has not been in a position to come up with a reliable strategy to ensure a timely delivery of doses.”

AstraZeneca said in a statement that it “regrets” the Commission’s decision to take legal action and it will “strongly defend” itself in court.

Infections surge in the Philippines

Confirmed novel Coronavirus infections in the Philippines surged past 1 million on Monday in the country’s latest grim milestone, as officials assess whether to extend a month-long lockdown in the Manila region amid a deadly spike or relax it to fight an economic recession, joblessness and hunger.

US to immediately provide raw materials

After much criticism, the US has assured India that it will immediately provide the specific raw materials required for manufacturing the Covishield vaccine, with a top White House official saying that the Biden administration was ‘working around the clock’ to deploy all resources and supplies to bolster the country’s fight against the deadly COVID-19 spike.

Authorities in Thailand are imposing fines of up to 20,000 baht ($640) for people who fail to wear face masks in public in 48 provinces. Prime Minister Prayuth Chan-ocha was among the first to be fined for the offence on Monday, when the rule took effect in Bangkok.

British Prime Minister Boris Johnson on Monday denied a press report which quoted him as allegedly saying he would rather see “bodies pile high in their thousands” than impose a third national lockdown on the country. The Daily Mail claimed that Johnson made the comment in the fall of 2020.

Landmarks across UAE lit up with tricolour in solidarity with India

The Burj Khalifa in the Indian tricolour. Pic/PTI

Prominent iconic buildings, including the Burj Khalifa, in the UAE were lit up with the tricolour to show solidarity with India as it grapples with a growing COVID-19 crisis. India’s total tally of COVID-19 cases has climbed to 1,73,13,163 while active cases have crossed the 28-lakh mark. The death toll increased to 1,95,123 with a record 2,812 new fatalities, according to the Union Health Ministry data updated on Monday.