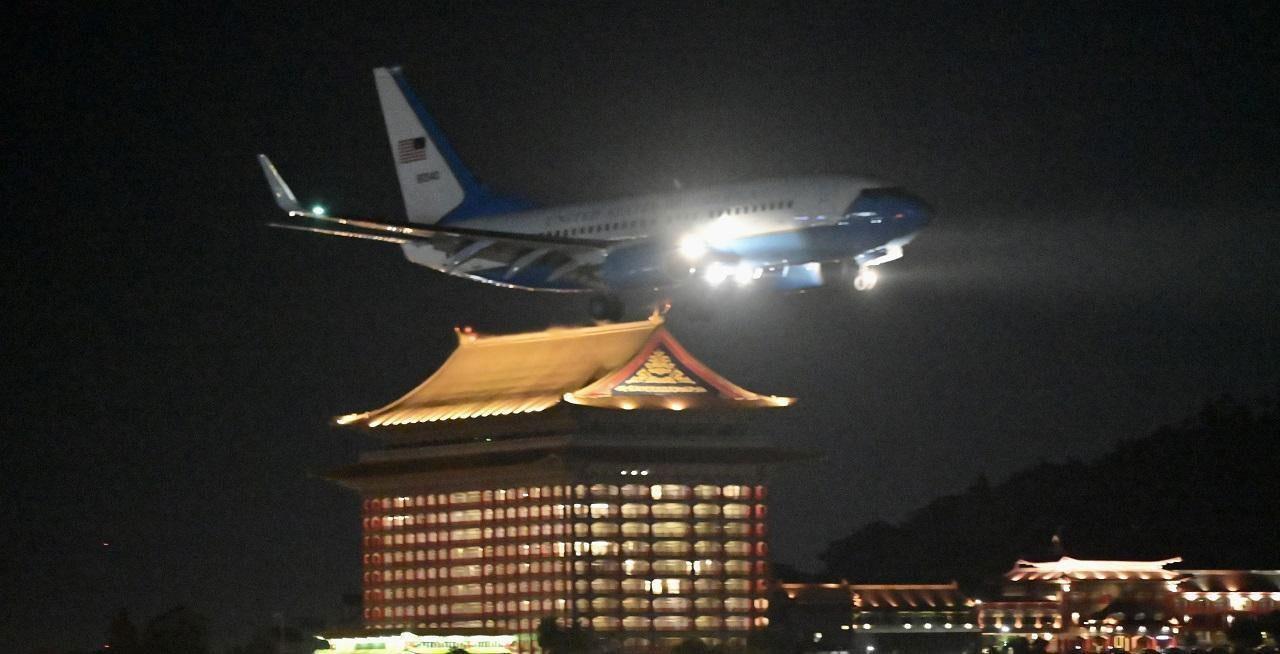 A US military aircraft with US House Speaker Nancy Pelosi on board prepares to land at Songshan Airport in Taipei. Pic/AFP


Displeased by US House Speaker Nancy Pelosi's visit to Taiwan, China on Wednesday announced to halt the exports of Natural sand to the island, CGTN News reported, citing the Chinese Ministry of Commerce. US House speaker Nancy Pelosi arrived in Taiwan on Tuesday, despite Beijing's continuous security threats.

Beijing maintained that Pelosi's visit is a serious violation of the one-China principle and the provisions of the three China-US joint communiques. It said the visit gravely undermines peace and stability across the Taiwan Strait and sends a seriously wrong signal to the "separatist forces for Taiwan independence". Shortly after Pelosi landed in Taipei on Tuesday, she reaffirmed her country's unwavering commitment to supporting Taiwan's democracy and said this trip in no way contradicts longstanding United States policy on the self-governed island.

The COA confirmed that the blacklisted companies include producers of tea leaves, dried fruits, honey, cocoa beans, and vegetables, as well as catches from around 700 fishing vessels, the agency said. Data from China's General Administration of Customs, however, suggests that multiple Taiwanese companies whose registration status is up to date have also been affected by the ban.

On its website, the customs administration lists a total of 107 registered Taiwanese brands under the category "crackers, pastries and noodles," of which 35 companies are currently labelled "imports temporarily suspended," despite having up-to-date registration, Focus Taiwan reported. The US House Speaker, who is second in line to the Oval Office after the US vice-president landed in Taiwan on Tuesday on the highest level US visit in more than two decades.

She arrived in Taipei as part of a Congressional delegation's tour of the Indo-Pacific region in the face of the China threat. Minutes after her aircraft landed in Taipei, the Chinese People's Liberation Army (PLA) announced that it would hold six live-fire military drills in waters around Taiwan, scheduled to take place from Thursday to Sunday.

The Chinese ministry opposed Pelosi's visit to Taipei saying that "Pelosi disregarded China's strong opposition and solemn representations and visited Taiwan, China.." "China's sovereignty and territorial integrity have seriously undermined the peace and stability of the Taiwan Strait and sent a serious wrong signal to the "Taiwan independence" separatist forces," the ministry said.

China reiterated that Taiwan is an inalienable part of China's territory, and the government of the People's Republic of China is the only legitimate government representing the whole of China, and Nancy Pelosi, disregarded China's strong opposition and solemn representations and visited Taiwan, China. The Chinese officials and experts warned that all the consequences of this highly dangerous and provocative move will be borne by Washington, and such a visit will also forever change the cross-Straits situation and deliver a destructive impact on the already-difficult China-US relations.

Next Story : How the CIA identified and killed Zawahiri