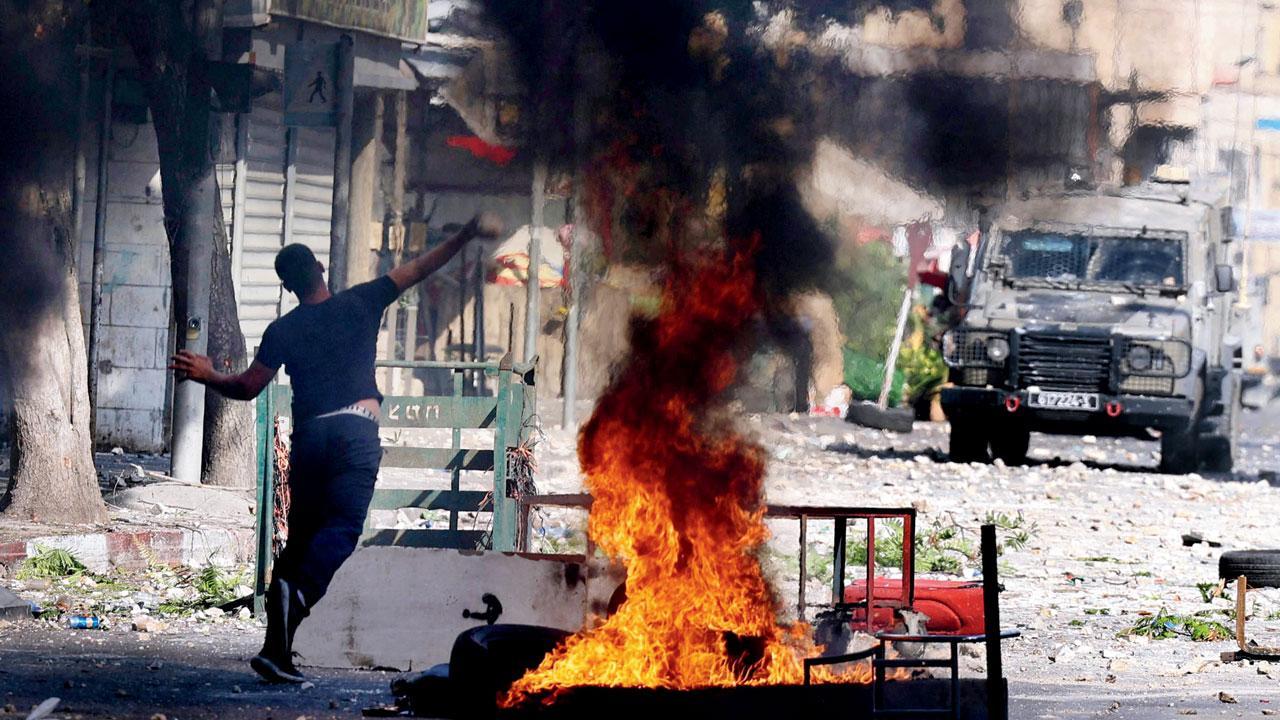 Palestinian protesters hurl rocks at Israeli security forces vehicles during their raid in the old town of Nablus Monday. Pic/AFP


Israeli security forces killed two Palestinian gunmen in armed clashes in the occupied West Bank on Tuesday, witnesses and the Israeli military said. Israeli forces surrounded the house of Ibrahim al-Nabulsi a senior commander of the Fatah’s Al-Aqsa Martyrs Brigades militant group long on Israel’s wanted list, calling him to exit, witnesses and the military said. Al-Nabulsi, barricaded inside with other militants, refused to surrender and a gun battle followed with Israeli forces also using shoulder-fired missiles in the fighting.

Palestinian health officials confirmed al-Nabulsi and another militant were killed and said 40 people were injured, many in confrontations that erupted following the shoot-out. There were no reports of Israeli casualties.

The deadly clash, in the city of Nablus, came less than two days after Israel and the Palestinian Islamic Jihad militant group ended three days of fighting in Gaza - the worst flare-up since May 2021, with their truce largely holding. Al-Nabulsi, was a member of the recently formed “Nablus Brigade”, a Palestinian militant alliance which also includes Islamic Jihad’s gunmen. The Israeli military said he was suspected of carrying out several shooting attacks against Israeli civilians and soldiers.

The head of Lebanon’s powerful armed movement Hezbollah, Sayyed Hassan Nasrallah, warned on Tuesday against any Israeli attempts to expand their targeting of Palestinian militants to Lebanon. “Any attack on any human being will not go unpunished or unanswered,” Nasrallah said in a televised address marking Ashura, a melancholic commemoration for Shi’ite Muslims of the killing the Prophet Mohammad’s grandson Hussein.

The comments came after a flare-up in violence between Israel and Islamic Jihad movement in the Gaza strip, prompted by the arrest of a senior Islamic Jihad leader earlier. On Saturday, Israeli defence minister Benny Gantz hinted at possible targeting of Islamic Jihad officials abroad, who he said could be seen in “restaurants and hotels in Tehran, Syria and Lebanon”. “They too will have to pay the price,” Gantz said.

Only peace can end violence

The top U.N. Mideast envoy warned Monday that the ceasefire between Israel and Palestinian militants is “fragile” and the “cycles of violence” will only stop when an independent Palestinian state lives side-by-side with Israel. Tor Wennesland called on Israeli and Palestinian leaders and the international community at an emergency meeting of the U.N. Security Council on the latest violence “to strengthen diplomatic efforts to return to meaningful negotiations towards a viable two-state solution.”

Next Story : Moscow steps up assault on eastern Ukraine