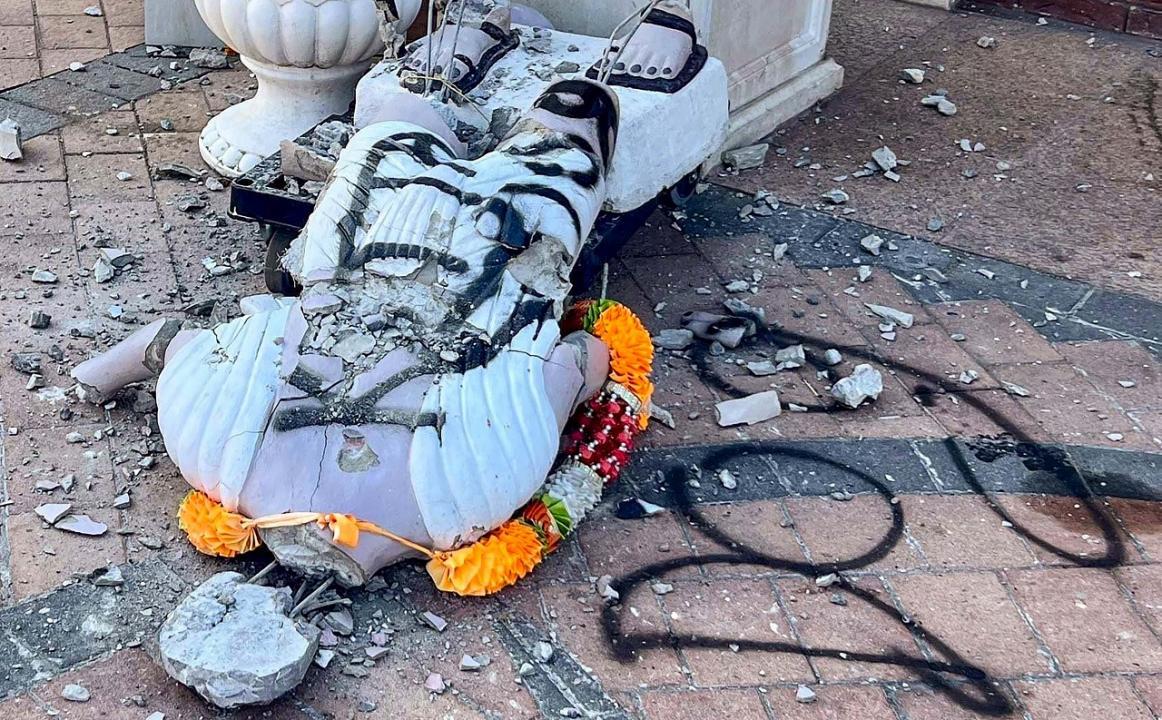 A vandalised statue of Mahatma Gandhi outside a temple in Queens, New York city. Pic/PTI


In a possible hate crime, a group of six unidentified persons destroyed a handcrafted statue of Mahatma Gandhi with a sledgehammer at a Hindu temple here after vandalising it earlier this month.

India on Friday strongly condemned the "despicable action" and took up the matter with the US authorities to ensure those responsible for the act are held accountable.

The New York City Police Department in a statement to PTI said it was reported to police on August 16 at approximately 0130 hours that "a group of six unidentified male individuals" damaged and vandalised "a religious statue with a sledge hammer in front of Tulsi Mandir located at 103-26 111 Street".

"The male individuals then fled toward Liberty Avenue and entered two vehicles, a white Mercedes Benz and a dark colour possibly a Toyota Camry with possible taxi/livery sticker on the back passenger window," it said, adding that the miscreants were approximately aged between 25 to 30 years.

The NYPD has asked for the public's assistance in ascertaining the whereabouts of the miscreants and urged anyone with information related to the incident to call its Crime Stoppers Hotline or submit their tips at Crime Stoppers website.

New York State Assemblywoman Jenifer Rajkumar in a statement on Thursday said, "In an act outraging the entire Queens community and peace-loving people worldwide, the statue of Mahatma Gandhi outside Shri Tulsi Mandir was vandalised for a second time."

"This time, the statue was totally destroyed and graffitied with obscene names. Vandals also graffitied the mandir grounds and 111th Street asphalt," the Indian-American lawmaker said.

Surveillance video shows a person thrashing a statue of Gandhi with a sledgehammer on Tuesday, before smashing the head off and toppling it over, according to cbsnews.com.

Minutes later, a group of six stomp on it and take turns hammering the statue before taking off, it said.

"To see them coming after us like this is very painful," Lakhram Maharaj, the founder of Shri Tulsi Mandir situated in South Richmond Hill, was quoted as saying in the report.

Maharaj discovered the Gandhi statue was reduced to rubble on Wednesday morning.

The words "dog" and "Gandpi dog" were spray painted both in front of the temple and down the block.
Maharaj says many in the community are now afraid to go to the temple.

"I cannot show the congregation that I am worried because if I show them that I'm worrying and I'm not strong, how will they be strong?" the report quoted him as saying. The temple authorities cannot afford to replace the Gandhi statue, because it was handcrafted and cost about USD 4,000, the report said.
"I want to know why they did it," Maharaj said.

"When the Gandhi statue was vandalised, that really flew in the face of all of our beliefs and it's very disturbing for the community," said Rajkumar, the first South Asian woman to be elected to the New York State Assembly.

Rajkumar, who represents the Queens area, in the statement said she has spoken with Police Commissioner Keechant Sewell and 106th Precinct Commanding Officer Captain Jerome Bacchi and "they are taking this incident seriously and investigating it as a possible hate crime".

"I call for the perpetrators to be apprehended swiftly, charged, and prosecuted to the fullest extent of the law," she said.

Since the targeting of the Gandhi statue and the Hindu Temple, Rajkumar said she has received an outpouring of support not just in Queens, but from people all around the world.

"I have spoken with government leaders across the country. All are committed to re-doubling our efforts to combat anti-Hindu hate. We always knew that defeating hate would not be accomplished in one day, one week, or even one year. We are committed to this fight for the long term, and will use the Hindu principles of ahimsa (non-violence) and satyagraha (soul force) that guided Gandhi himself and later the great American civil rights hero Martin Luther King, Jr," she said.

Meanwhile, the Consulate General of India in New York in a statement on Friday said it "strongly condemns the vandalisation of the Mahatma Gandhi statue outside a temple in Queens, New York. We have taken up the matter with US authorities seeking thorough investigation so that those responsible for such despicable action are held accountable."

Non profit organisation Cityline Ozone Park Civilian Patrol said it is deeply saddened to learn of the vandalism at the Tulsi Mandir.

"This is not the first time something like this has happened, and it must stop. We must work together to send a clear message that hate crimes towards any religion will not be tolerated," it said.

Condemning the "cowardly act", Ankur Vaidya, Chairman of diaspora organisation Federation of Indian Associations (FIA) said, "We sincerely urge the Mayor's office and the NYPD to investigate this malicious act as a hate crime and bring these criminals to justice. It is clear that the ones that perpetuate these sorts of vandalisms will have the will and intention to do more malice to create negative sensationalism."

The incident is an act of hate and aggression and has repeated itself more times this year than in the history of the city previously, he said.

In February, an 8-foot-high Gandhi statue, located in Manhattan's Union Square, was defaced by unknown persons.

In December 2020, Khalistani-supporters had desecrated a Gandhi statue in Washington, DC in front of the Indian Embassy.

The then White House Press Secretary, Kayleigh McEnany, had termed the incident as "terrible".

Next Story : Judge wants to release evidence for Trump search