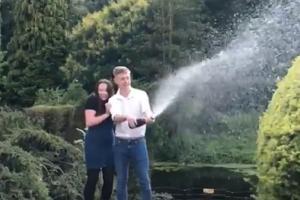 
A teenager from the US named Saw Lawton is an example of beginner's luck as he bagged a whopping amount of Rs 1.04 crore from the first lottery ticket that he had ever bought. The 19-year old had no plans of buying one but ended up buying it after he saw a fellow winner Dean Weymes on television last month. He purchased a ticket for Rs 130 through a mobile application. He was surprised when he saw the numbers on the ticket matched the numbers that won.

Lawton planned to spend the money on productive things like driving lessons, deposit for his new home and enjoy a holiday in New York with his girlfriend.

According to Indiatimes, Sam Lawton celebrated the day by opening a bottle of champagne during a press conference at Coombe Abbey Hotel in Coventry, England.

Also Read: From marrying a ghost to a video game: World's most bizarre weddings

Next Story : Dog passes away 15 minutes after death of owner