He provided a solid anchor, first putting on 66 with his captain Kraigg Brathwaite (23) for the second wicket, then finding 105 for the fourth wicket with Kyle Mayers. Near the close he added 32 with Jason Holder (13 not out) to ensure the draw. 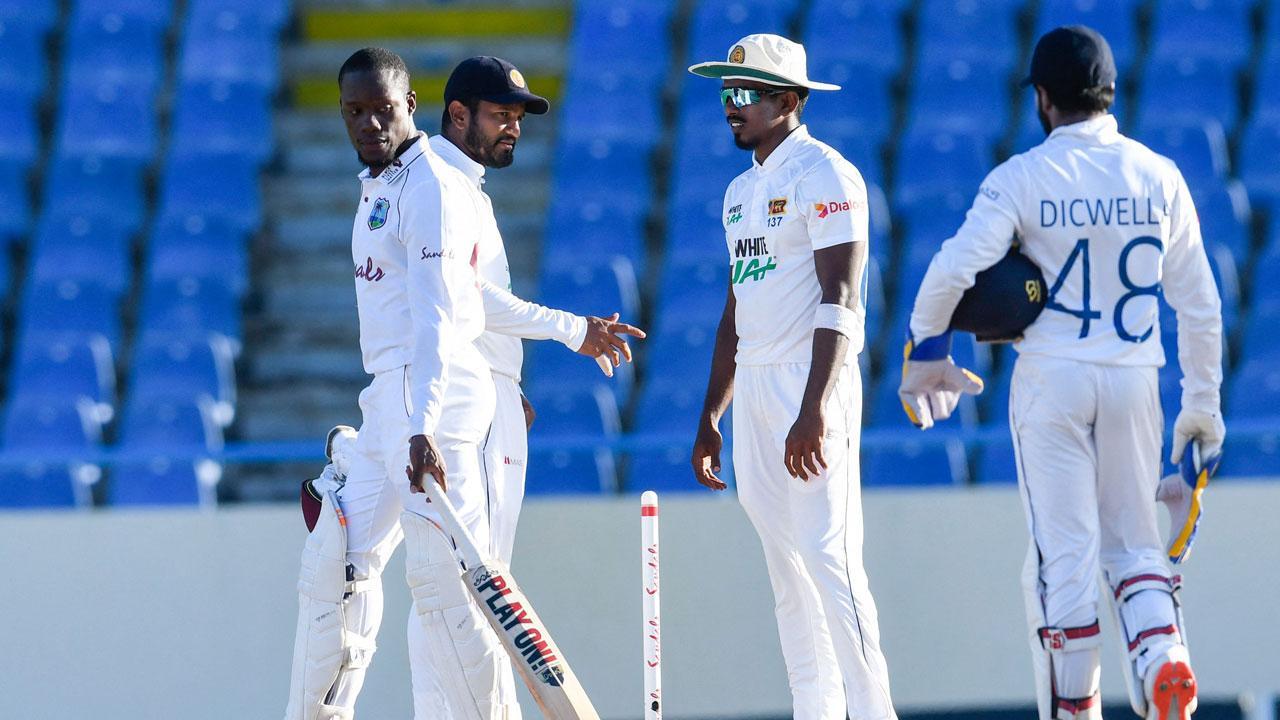 Nkrumah Bonner (L) of West Indies, Dimuth Karunaratne (C) and Vishwa Fernando (2R) of Sri Lanka at the end of the 5th and final day of the 1st Test. Pic/AFP


Nkrumah Bonner scored a maiden Test century and batted throughout the fifth day of the first Test to guide West Indies to a draw against Sri Lanka at the Sir Vivian Richards Stadium. Chasing 375 for victory, West Indies started the last day on at 34/1, and Bonner batted all day to make 113 not out.

He provided a solid anchor, first putting on 66 with his captain Kraigg Brathwaite (23) for the second wicket, then finding 105 for the fourth wicket with Kyle Mayers. Near the close he added 32 with Jason Holder (13 not out) to ensure the draw.

Left-hander Mayers scored 52 with five boundaries of 113 balls - which followed up his first innings 45 - but was out in the first over after tea. Jermaine Blackwood followed soon after for just four West Indies slipped to 204/4. However, there was no alarm as Bonner remained kept calm and carried on until the close of play. He spent eight balls on 99 before going to his maiden century with a cover-driven four off Vishwa Fernando. At that point 32-year-old Bonner, playing only his sixth Test innings, had faced 243 balls and hit 11 fours and a six.

Bonner has been very consistent wince his Test debut in the historic series win in Bangladesh last month. On debut in Chattogram he made 17 and 86 and followed up with 90 and 38 in the second match in Dhaka. During the first Test against Sri Lanka, he made 31 in the first and added today's century. Overall, he has now made 375 runs at an impressive average of 75 per innings.

"It's truly special for me. This was my childhood dream and I'm really happy to get this monkey off my back. Personally, in the first innings my feet weren't moving as much as I wanted them to," said Bonner after receiving the Player-of-the-Match award. "I did some work in the nets with the batting coach. The Sri Lankan bowlers are very disciplined so it was important for me to construct my innings with discipline," he said. The two teams will now prepare for the second Test match which starts on Monday at the same venue.