Michael Clarke Instagrammed the picture with Pip and daughter Kelsey 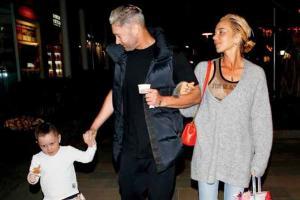 
Former Australia cricket captain Michael Clarke, 39, confirmed his relationship with fashion designer Pip Edwards, 40, on social media by sharing a picture with her.

On Thursday, he Instagrammed the above picture with Pip and daughter Kelsey, four (with ex-wife Kyly), for his 850,000 followers and captioned it: "Double date."

Michael, nicknamed Pup, and Pip are currently enjoying their holidays in Noosa on Queensland's Sunshine Coast. Michael and Pip have kept their fans updated by posting pictures of their holiday on their respective social media accounts.

Last week, Pip Instagrammed a selfie taken in a car, which Michael was driving, while her son Justice, who she shares with ex-partner Dan Single, was sitting in the back seat.

Next Story : Sachin lauds Jason Holder for bringing on spinner in 1st session