Bangladesh romp to consolation win in final ODI vs Zimbabwe

After Bangladesh made 256/9, Zimbabwe were bowled out for just 151 in 32.2 overs despite a record 68-run stand for the last wicket between Richard Ngarava and Victor Nyauchi 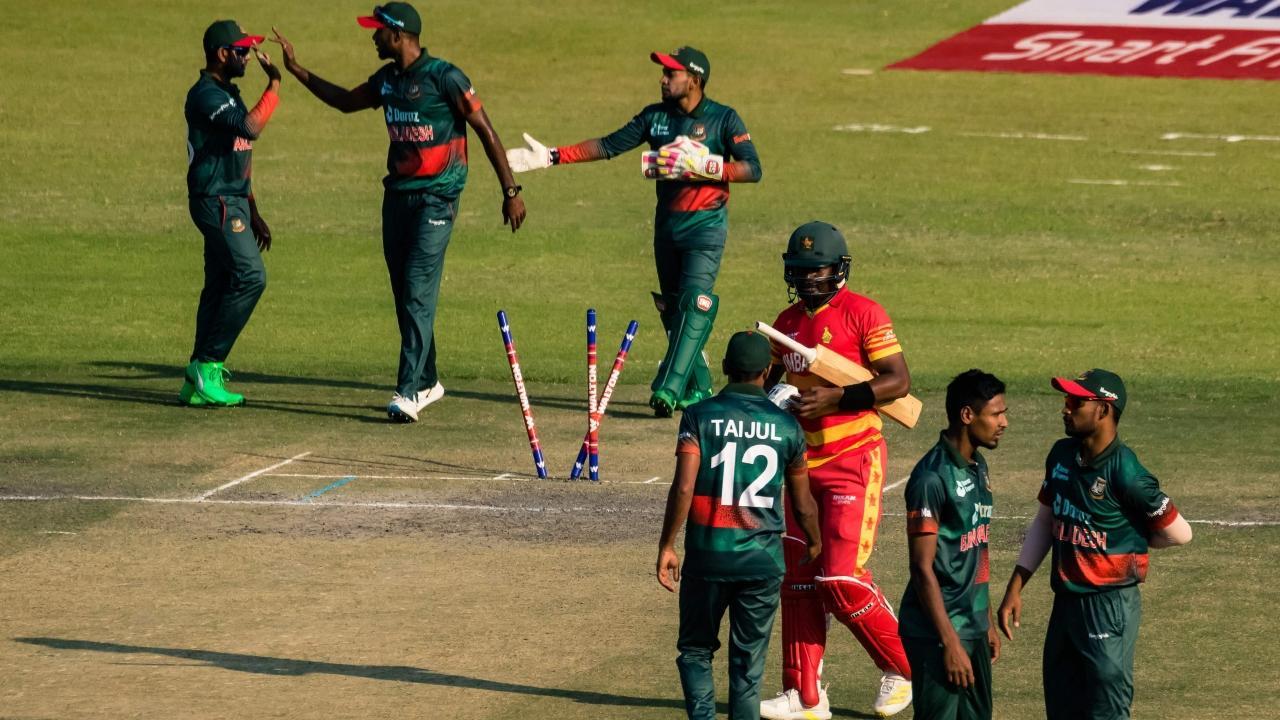 
An unbeaten 85 from Afif Hossain's 85 and 76 from Anamul Haque propelled Bangladesh to a 105-run victory over Zimbabwe in the third and final ODI at Harare Sports Club.

After Bangladesh made 256/9, Zimbabwe were bowled out for just 151 in 32.2 overs despite a record 68-run stand for the last wicket between Richard Ngarava and Victor Nyauchi. But Zimbabwe had already won the ODI series with a 2-1 scoreline while Bangladesh ended their tour on a winning note, but it didn't coat over the fact that they lost both the T20I and ODI series.

Captain Tamim Iqbal and Anamul put on 41 for the opening stnad, before in the ninth over they had a mix-up over a possible single and Tamim was run out for 19. Najmul Hossain Shanto and Mushfiqur were out quickly without scoring, to make the score 47-3.

Mahmudullah came in to start cautiously, and the score rose slowly for a while until Anamul reached his fifty off 48 balls. Both batters now began to play more aggressively, with Anamul in particular looking to hit boundaries.

He was looking dangerous when, finally, Luke Jongwe bowled him a good delivery outside the off stump which he edged to Madande behind the stumps, having scored 77 off 74 balls, with four sixes and six fours.

Mahmudullah and Afif shared a useful partnership together without ever really dominating the bowlers, until Ngarava returned and with his first ball dismissed Mahmudullah, sending him back to dressing room for 39 off 69 balls.

Mehidy Hasan Miraz scored 14 before Sikander Raza trapped him lbw. Afif soon reached his fifty off 58 balls, and opened up to Ngarava for four and six off successive deliveries. But he lost Taijul Islam to a run out, Hasan Mahmud was caught without scoring and Mustafizur Rahman was run out attempting a stolen bye.

With the last man Ebadot Hossain in, Afif did his best to boost the score, but only 12 runs came off an erratic last over from Jongwe, and the final total was 256-9. Afif finished with 85 not out off 81 balls, with two sixes and six fours. Evans took 2-53 in eight overs and Jongwe 2-38 in six.

Hasan Mahmud gave Bangladesh early breakthrough as Takudzwanashe Kaitano was trapped lbw. In the next over, Mehidy saw Tadiwanashe Marumani charging down the pitch but failed to reach the ball, which hit his off stump.

Innocent Kaia and Madhevere played very cautiously for three overs, but then Ebadot produced a superb delivery that flew off the shoulder of Madhevere's bat and was caught at point. Ebadot then bowled a swinging yorker, and Raza could only chop it into his stumps.

Kaia defiantly struck Hasan for two successive fours. But when the left-arm spinner Taijul came on, he failed to read his arm ball and was trapped lbw for 10, leaving Zimbabwe reeling at 31-5.

Tony Munyonga hit a few blows before he was stumped out for 49. Madande and Jongwe put up a fight for the seventh wicket, sharing a stand of 28 in seven overs before the latter was easily caught at cover for 15.

Madande soon followed, after he skyed an attempted pull off Mustafizur and was caught for 24 off 45 balls. Three balls later Evans skyed a ball from the same bowler to be caught at point for two.

Ngarava showed some fight, smashing two leg-side fours and a six in an over from Mehidy. He and Nyauchi kept the spectators entertained with their plucky batting. Their gallant effort came to an end at 151, when Nyauchi, backing away to slog, was bowled out by Mustafizur for 26, scored off 32 balls with a six and three fours.

Ngarava remained unbeaten on 34 off 26 balls, with a six and six fours. Their partnership of 68 is a new Zimbabwe record for the last wicket in ODIs, beating the 60 scored by Shingi Masakadza and Ian Nicolson against Ireland in Harare in 2010-11. Mustafizur was the most successful bowler of the match, taking 4-17 runs, while Ebadot and Taijul scalped two wickets each.

Next Story : WI series is a great opportunity to try different combinations ahead of T20 World Cup: NZ's Conway