Cheteshwar Pujara has been known widely for his classical batting exploits and steely defence in Test cricket. But of late, the right-handed batter has been showing what he is capable of with his current run for English county side Sussex in the ongoing Royal London One-Day Cup 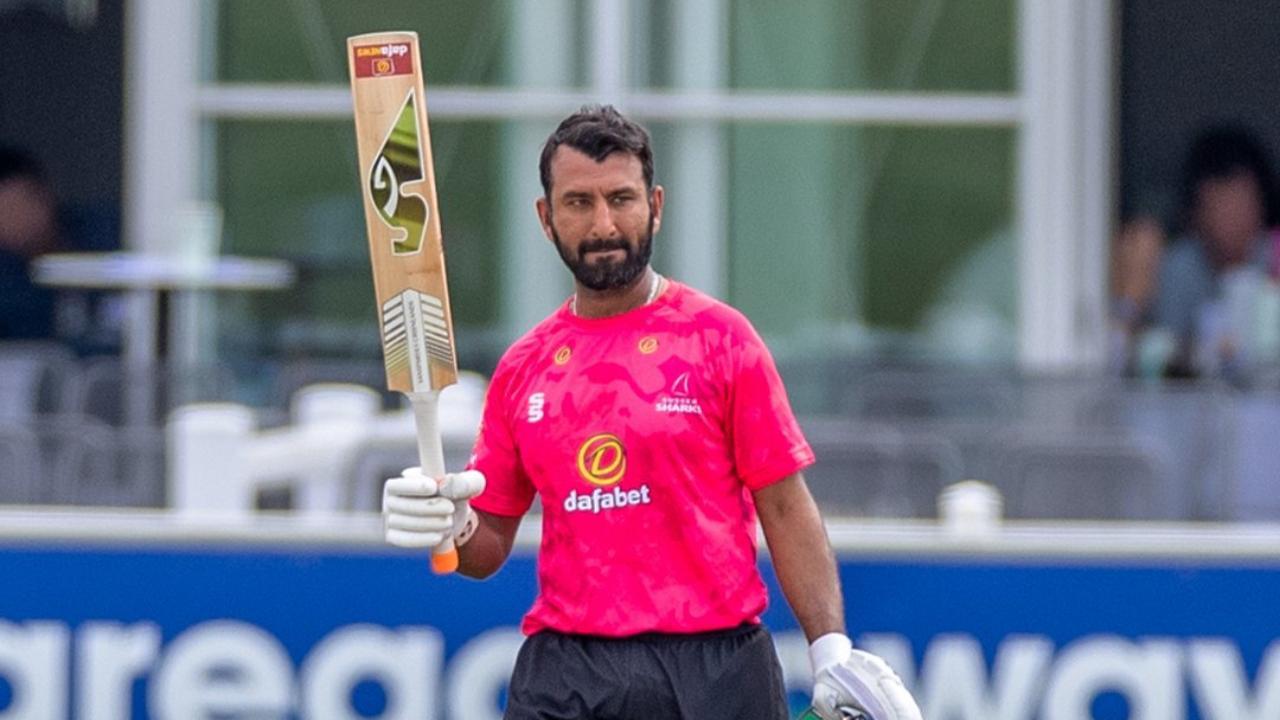 
Cheteshwar Pujara has been known widely for his classical batting exploits and steely defence in Test cricket. But of late, the right-handed batter has been showing what he is capable of with his current run for English county side Sussex in the ongoing Royal London One-Day Cup. In five matches, Pujara has made 367 runs at an average of 91.75 and strike-rate of 120.72, becoming the second-highest run-scorer in the competition. Moreover, two of his centuries have arrived in successive matches. Pujara scored a 79-ball 107 against Warwickshire on Friday. He also hit 22 runs off the 45th over, but he was unable to take his side over the line. On Sunday, as Sussex's captain, Pujara smashed a fantastic 174 off 131 balls against Surrey.

With his astonishing knock laced with 20 fours and five sixes, Pujara now holds the record for the highest-ever score made by a Sussex batter in List A cricket competition in the United Kingdom, going past the 171 made by Namibia all-rounder David Wiese against Hampshire in 2019. Pujara also brought up his highest ever score in List A cricket, going past the unbeaten 158 he made while representing India B in Rajkot way back in 2012. What was most impressive about his knock against Sussex was that he rescued the side from an early state of trouble at 9/2.

But Pujara stepped up to the challenge. After making 23 runs off his first 45 balls, Pujara got his fifty in 69 balls. Post reaching the three-figure mark in 103 balls, Pujara marched forward with an enthralling knock of 174 and propelling Sussex to making 378/6 in their 50 overs. He also shared a stand of 205 runs with Tom Clark, who made 104, for the third wicket. After Clark fell, Pujara marched forwards till he unleashed carnage on Surrey's bowlers, smashing 74 runs off his last 28 balls before falling in the 48th over.

In his play till now, Pujara has been great on the lofted shots and even brought out the lap shots, much to the surprise of many cricket fans in India and all over the world. In ODI cricket, Pujara just got five opportunities in the Indian blue jersey, making 51 runs at an average of 10.20 and strike-rate of 39.23. But with the way ODI cricket was evolving in the 2013-14 period and people like Virat Kohli as well as Rohit Sharma finding their way along with Shikhar Dhawan, Ajinkya Rahane and Suresh Raina in the mix, Pujara never got a proper look-in.

In this context, his exploits for Sussex look great, but one wonders if its too late to get back into ODI scheme of things.