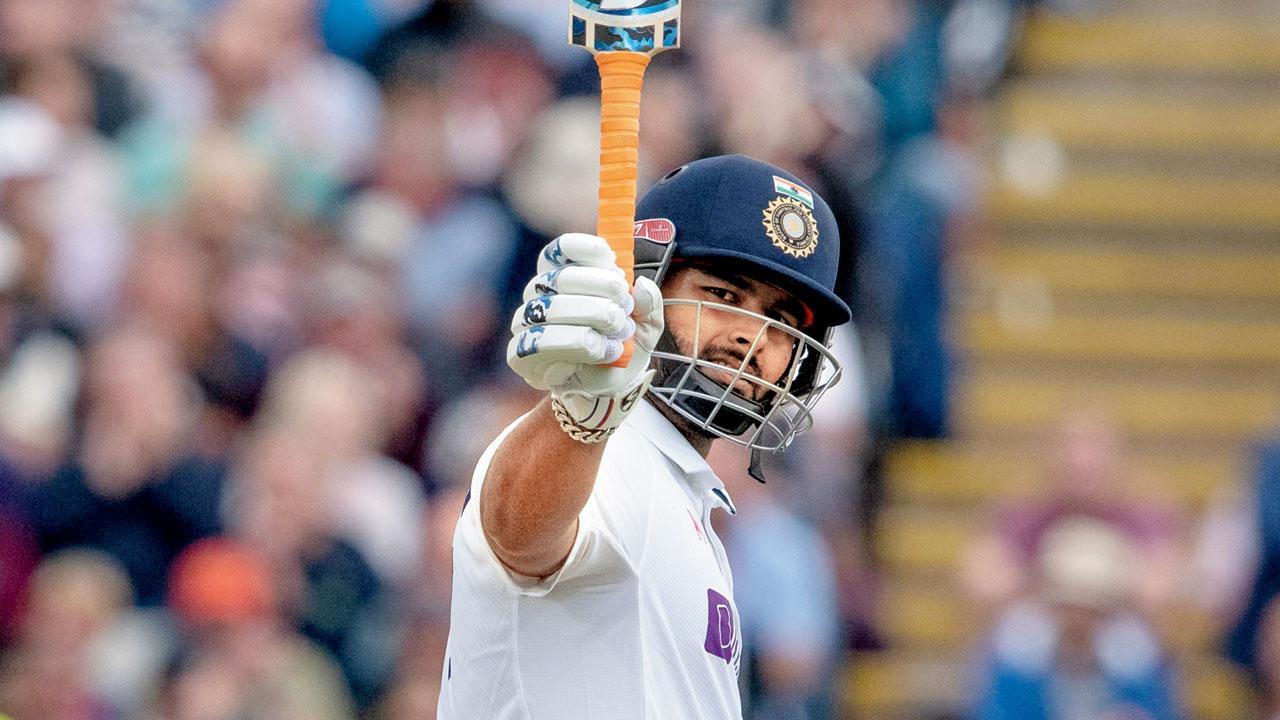 Rishabh Pant celebrates his half-century against England on Day One of the fifth Test at Edgbaston yesterday. Pic/Bipin Patel


Not for the first time in his unique and  unorthodox manner, Rishabh Pant proved that fortune favours the brave.  While the top-order Indian batsmen struggled against a sustained English seam attack in the morning session, Pant in the company of fellow southpaw Ravindra Jadeja revived India’s hopes with a fighting century partnership for the sixth wicket. His sparkling century of just 89 balls, his fifth in Tests, ensured that India did not face opening day blues at Birmingham.

It was a frustrating start-stop-start morning for the Indians on the opening day of the rescheduled Pataudi Trophy fifth Test at Edgbaston. When England won the toss, it was overcast and their captain Ben Stokes had no hesitation in bowling first. By the time the openers came out, it was bright and sunny. Then, there was a spell of rain around lunchtime and on resumption, the sun continued to play hide and seek. All the while in fluctuating English weather the top-order struggled against the home seamers till the two left-handers found the measure of the bowling.

Coming together at 98 for five, things did not look rosy for India. But then, Pant has redefined the art of batting in difficult conditions in his own unique way. He stepped out to Jimmy Anderson to hit him over mid-on and made his intentions clear. He played both orthodox and unconventional strokes to race away to his half-century in just 51 balls and went on to his century in just 38 more deliveries.

On the other hand, Jadeja played a waiting game, giving Pant the opportunity to play his natural game. The two played some delectable shots off the pads and handsome drives to milk a tiring attack. As the pitch eased out in the second half, the two have ensured India will have a decent total on the board, as they were going strong at 251-5, with Pant on 102 and Jadeja on a well-compiled 51.

There is no doubt India would have liked to bowl first too and put the England batsmen under the pump. But with the weather predicted to be dodgy over the weekend, the Indian bowlers too will get the chance to hit back at the England batsmen in seaming conditions. Thus, nobody can, as of now, write off the Indian team after the grand recovery they have made.

There was little doubt that in the absence of Rohit Sharma and KL Rahul, who had provided solid starts in the four Test matches here last year, the going would be tough for the Indian batsmen in the first session with a cloud cover giving the bowlers some decent help. The openers Shubhman Gill and Cheteshwar Pujara could not see off the new ball threat and that exposed vulnerable Hanuma Vihari and struggling Virat Kohli to the fresh legs of the ageing duo of Anderson and Stuart Broad. Once they both departed early, it looked like India would collapse. However, it was due to the aggressive approach of Shreyas Iyer, though briefly, and the two left-handers that India were able to mount a fightback.

Next Story : ENG vs IND: Ravichandran Ashwin Misses Out, Blame It On Combo Call