Earlier, at 110/4 in 22.2 overs, South Africa were staring at a low total when Miller (75 not out off 63 balls) and Klassen (74 not out off 65 balls) shared a rollicking stand of 139 runs off 106 balls to take South Africa on a competitive total on a pitch which had something for bowlers 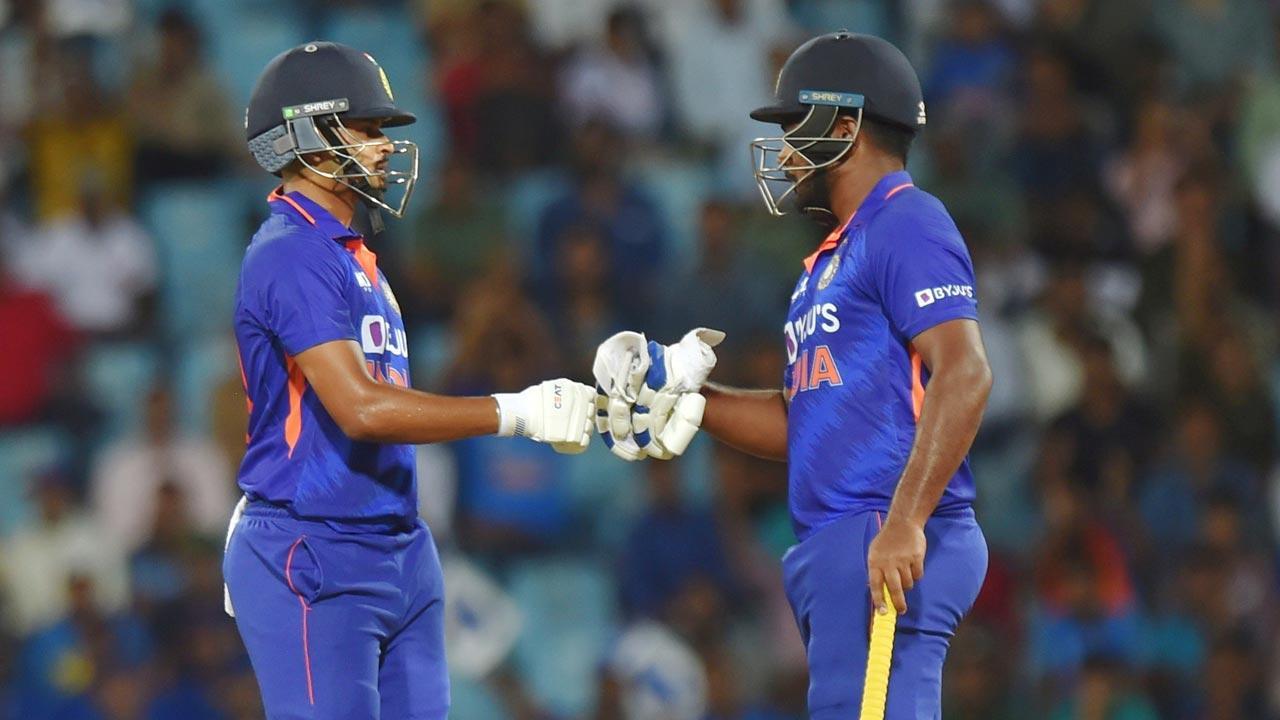 After David Miller and Heinrich Klaasen hit unbeaten fifties to power South Africa to 249/4 after rain delayed the start by two-and-a-half hours, India found themselves losing four wickets for 51 runs.

From there, Iyer and Samson shared a 67-run stand, before the latter stitched a crucial 93-run stand off 65 balls with Thakur, only for India to fall short narrowly, giving South Africa crucial ten points to push for a direct qualification in next year's ODI World Cup.

India's pursuit of chasing 250 were dealt with huge blows when Kagiso Rabada and Wayne Parnell got rid of Shubman Gill and Shikhar Dhawan respectively through thick inner edges disturbing the stumps.

Debutant Ruturaj Gaikwad made just 19 runs and was stumped off Tabraiz Shamsi. In the next over, Ishan Kishan's 37-ball stay at the crease came to an end by being caught at leg-slip off Keshav Maharaj.

At 51/4 in 17.4 overs, the match looked to be as good as over for India. But Iyer injected much-needed momentum into the chase, taking the attack to the bowlers by using his feet and timing his shots well. His onslaught on Tabraiz Shamsi was a surreal one - sweeping, lofting and punching to get a hat-trick of fours.

Iyer's counterattacking knock continued with him smacking Lungi Ngidi for a brace of fours, before playing a late cut off Maharaj to reach his fifty in 33 balls. But in the very next over, Iyer was deceived by extra bounce on short ball and pulled straight to mid-on.

With the required run rate going past ten, Thakur had a pacy start with two quick fours and survived two lbw shouts off Shamsi, on which South Africa burnt their full quota of reviews. Samson then stepped upto be the aggressor, lofting and pulling sweetly for boundaries before reaching his second ODI fifty.

Post reaching his fifty, Samson took consecutive fours off Shamsi while Thakur used Rabada's pace to hit a hat-trick of fours in a 14-run 37th over. But in the next over, Thakur danced down the pitch to heave but was caught at mid-off, ending a crucial 93-run stand off 65 balls.

With Kuldeep Yadav and Avesh Khan falling quickly, Samson tried to get an improbable win for India by hitting three fours and a six in the final over off Shamsi yielding 20 runs. But it was not enough for India to avoid a narrow loss.

Earlier, at 110/4 in 22.2 overs, South Africa were staring at a low total when Miller (75 not out off 63 balls) and Klassen (74 not out off 65 balls) shared a rollicking stand of 139 runs off 106 balls to take South Africa on a competitive total on a pitch which had something for bowlers.

India found movement to beat Janneman Malan and Quinton de Kock couple of times. Malan had luck on his side when Gill dropped his catch at first slip off Thakur. De Kock got going with a brace of fours off debutant leg-spinner Ravi Bishnoi. Thakur then gave India an important breakthrough in the 13th over when Malan's flick flew off the toe-end of the bat to mid-wicket.

He came back to castle Temba Bavuma through the gate while Kuldeep got Aiden Markram out for a five-ball duck. The left-arm wrist-spinner got the ball to drift across Markram and then spun back in sharply, sneaking through the gap between bat and pad to rattle top of off-stump. De Kock's resistance ended when he was trapped lbw off Bishnoi while going for a reverse sweep.

When Miller came at the crease, Klassen had got going with three fours. Miller, who's improved game against spin has been an impressive story this year, took two fours in his first six balls before fabulously lofting Bishnoi over mid-off for six. The duo dealt in ones and twos before Klassen took boundaries off Bishnoi and Kuldeep while Miller hit Thakur for two fours.

After reaching their respective fifties in the 36th over, South Africa fetched 54 runs in last five overs. Miller and Klaasen were also helped by India's sloppiness in the field, with Siraj, Gaikwad dropping catches and Kishan mis-fielding at backward point to give away a four. Miller hit two sixes and a four in the last three overs while Klassen hit a four to give South Africa a total enough to take 1-0 series lead.