While bowling, the South Africans had early success when Kagiso Rabada in the second over lured Rohit Sharma into playing at it and a thick edge went behind to Quinton de Kock, who dived to his right to send the Indian skipper back for a two-ball duck 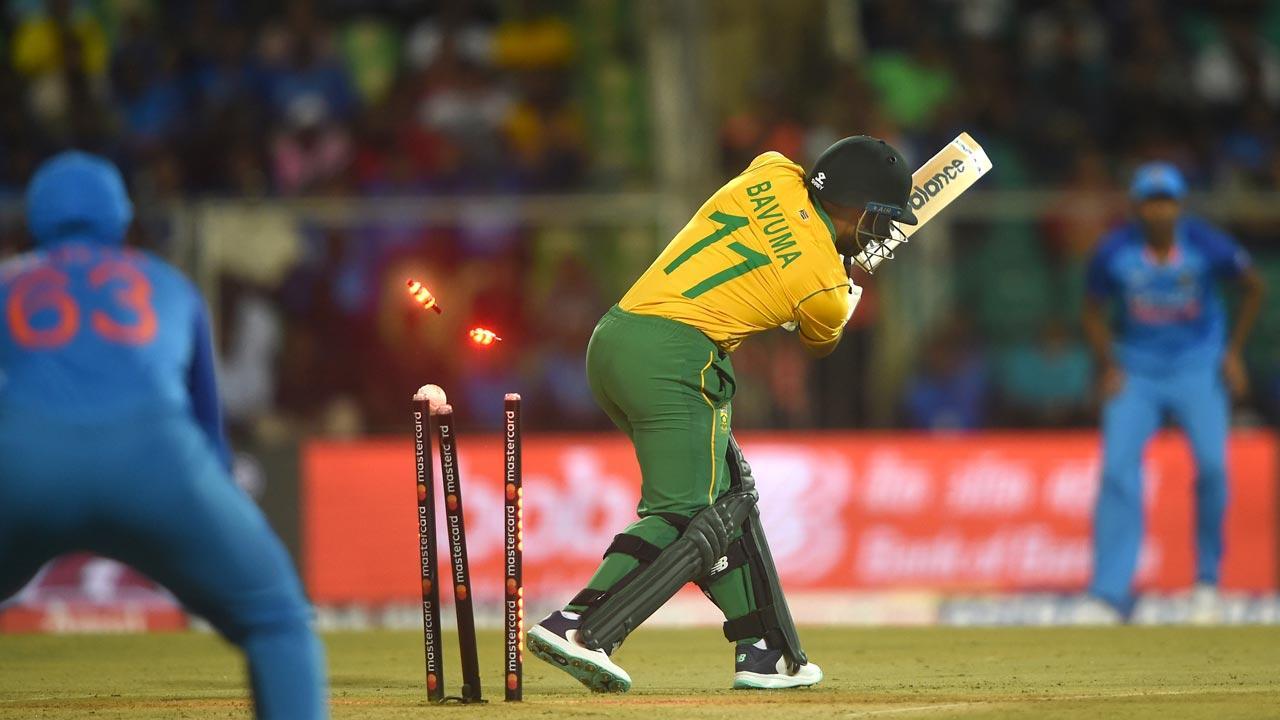 
South Africa captain Temba Bavuma said they did not expect so much juice in the wicket for the first T20I of the three-match series here and said his players failed to adapt to the conditions both while batting and bowling.

Bavuma said the batting unit failed to apply itself.

"As a batting unit, we failed to apply ourselves, We weren't able to adjust our plans. We saw what Rahul was able to do. We didn't expect that (the pitch to have so much juice), we practiced here two days, ago. We saw the wicket was spicy, but we didn't expect it like that. You expected to hit through the line coming to India," he said after the match.

Arshdeep Singh and Deepak Chahar blew away South Africa's top order in a magnificent spell of swing bowling, before vice-captain KL Rahul and Suryakumar Yadav slammed unbeaten fifties to give India an eight-wicket win here at the Greenfield International Stadium on Wednesday night.

On a two-paced pitch with a green tinge, Arshdeep (3/32) and Chahar (2/24) justified Rohit Sharma's call to bowl first as they scythed through South Africa's top-order by picking five wickets on the first 15 balls of the innings to restrict the visitors to 106/8 in 20 overs.

It took Keshav Maharaj's fighting efforts with the bat, top-scoring with 41 and taking three boundaries off Arshdeep in the 19th over, apart from 25 by Aiden Markram and 24 by Wayne Parnell for the visitors' to cross the 100-run mark, a possibility which looked far away when the decimation by Arshdeep and Chahar reduced them to 9/5 inside first three overs.

While bowling, the South Africans had early success when Kagiso Rabada in the second over lured Rohit Sharma into playing at it and a thick edge went behind to Quinton de Kock, who dived to his right to send the Indian skipper back for a two-ball duck.

But KL Rahul (51 not out) and Suryakumar Yadav (50 not out) struck half-centuries as India chased the target in 16.5 overs to start the series with an eight-wicket win.

Despite the presence of three seamers -- Kagiso Rabada, Wayne Parnell, and Anrich Nortje -- the South Africans could not prevent the Indians from romping to victory as there they had too few runs on the board.

"Three seamers on that type of wicket you back yourself. To be defending that type of score, you always hope for a miracle. The bating we need to work, and give the bowlers something to defend. Guys like Parni, and Keshav, showed good fights. The fight was on, but at the end of the day, there weren't too many runs," said Bavuma.

South Africa will now hope to bounce back in the second T20I at Guwahati on October 2 while India, on a high after beating Australia 2-1 in the preceding series, would like to take an unassailable 2-0 lead.

Next Story : Ball was swinging, plan was to pitch it in right places: Arshdeep Singh following win over South Africa in 1st T20I