Led by a brilliant bowling display, India defended 169 at the Lord's in dramatic fashion as they got the last England wicket via runout at the non-striker's end 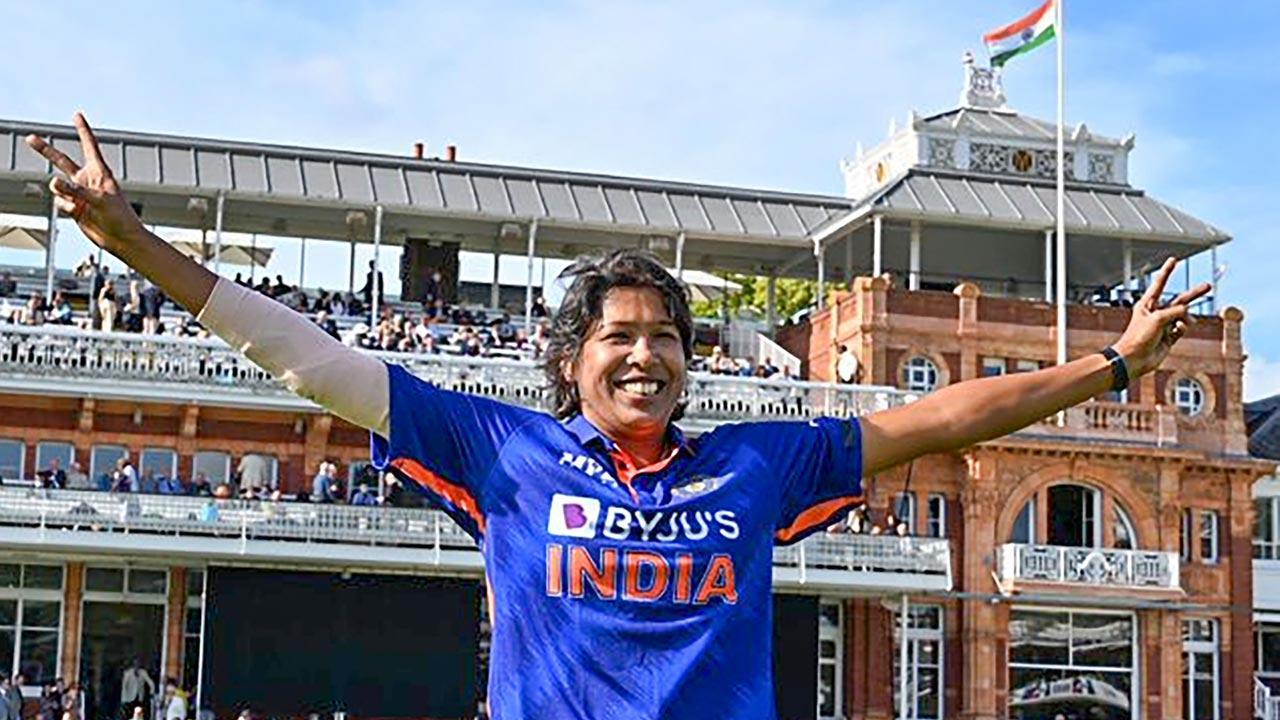 Indian women cricket player Jhulan Goswami during her farewell match, before the start of 3rd ODI match between India (W) and England (W) at the Lord's cricket ground in London. Pic/PTI


Indian women's cricket team gave a fitting farewell to legendary fast bowler Jhulan Goswami, on her last international game, with a 16-run victory in a low-scoring third and final T20I and 3-0 series whitewash over England at Lord's on Saturday.

With this, India also maintained their winning streak in the ICC Women's Championship 2022-25.

Led by a brilliant bowling display, India defended 169 at the Lord's in dramatic fashion as they got the last England wicket via runout at the non-striker's end.

With England requiring 17 runs to win, Charlotte Dean, who fought hard with an 80-ball 47, backed up too far at the non-striker's end and Deepti removed the bails to leave the batter in tears and those watching in shock.

Earlier, put into bat, India were reduced to 29/4. However, they recovered with Smriti Mandhana (50) and Deepti Sharma (68 not out) stitching together a crucial half-century stand. But once the partnership was broken, India lost wickets at regular intervals and were bowled out for 169 in 45.4 overs, making a below-par total.

Renuka Singh and Jhulan Goswami then delivered a fabulous opening spell to reduce England to 45/4 by the 12th over.

Rajeshwari Gayakwad struck twice in her first two overs to further dent England. 53/6 soon turned into 65/7 and the hosts had a huge uphill task on hand, but skipper Amy Jones and Charlotte Dean strung together a brilliant stand to revive England's innings.

While Jones was dismissed, Dean waged a lonely battle, continuing to push England closer to the target. The 21-year-old found support from the lower-order and an England win appeared a distinct possibility with Dean closing in on a half-century.

Freya Davies and Dean put on 35 runs for the final wicket, helping England from 118/9 to within touching distance of the target before Deepti Sharma ran Dean out before delivering the ball at the non-striker's end in her delivery stride to seal India's win.

While the dismissal garnered attention from all quarters, according to the updated ICC Playing Conditions, "running out of the non-striker" has been moved from the 'Unfair Play' section to the 'Run out' section.

The series whitewash gave India their first such win over England in an ODI series in 20 years. They had beaten England 5-0 at home in 2002. This is, however, the first time India have whitewashed a non-Asian side in a bilateral ODI series of three or more games.

It was a fitting farewell for Goswami in her final international game and her first at the historic venue since the heartbreaking loss to England in the final of the ICC Women's Cricket World Cup in 2017.

Next Story : Varsity fixture record still has an Indian tune!