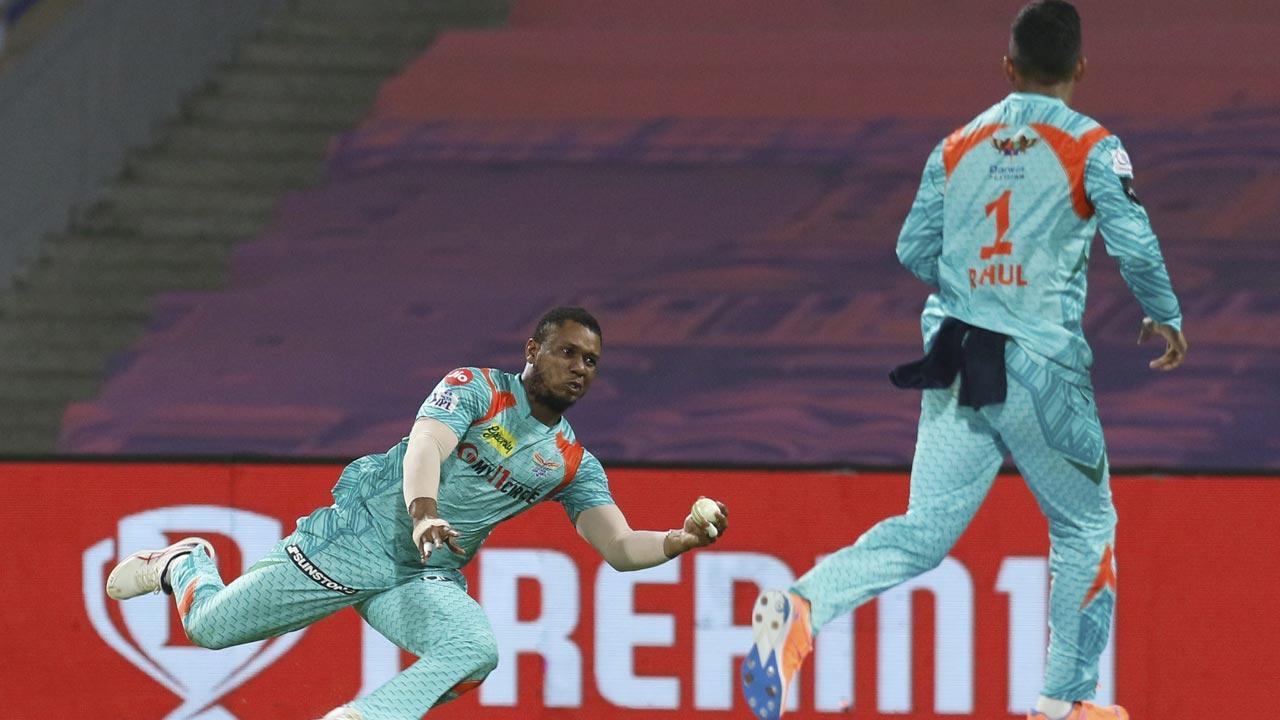 Evin Lewis of Lucknow Super Giants takes the catch of Rinku Singh of KKR during the match at DY Patil Stadium. Pic/ PTI

A sensational hundred by Quinton de Kock (140 not out off 70) and a solid fifty by KL Rahul (68 not out off 51) powered Lucknow Super Giants to 210/0 in 20 overs, after winning the toss and opting to bat first. De Kock, who was given a life early in his innings, made KKR pay for it and he even overshadowed his opening partner KL Rahul with his knock.

Both LSG batters remained not out till the last ball of the innings, didn't show any mercy on KKR bowlers and broke many records during the process. Notably, it was for the first time a team batted the entire 20 overs in IPL without losing a wicket. It was also the highest opening stand ever in IPL history and the third highest partnership for any wicket in the cash-rich league.

Tim Southee (0/57) was the most expensive bowler for KKR while the likes of Andre Russell (0/45) and Varun Chakaravarthy (0/38) were also not far behind in conceding runs.

In reply, KKR skipper Shreyas Iyer smashed a fine fifty (50 off 29) and stitched a 66 run stand for the fourth wicket with Sam Billings (36 off 24) to keep his team alive in the run chase.

However, once Shreyas and Billings got out, it was an uphill task for KKR. But, lower down the order, Rinku Singh (40 off 15) and Sunil Narine (21 not out off 7) showed the fighting spirit and hit a few lusty shots to bring the equation to 21 runs off 6 balls.

Rinku hit Marcus Stoinis for 4, 6, 6 in the first three balls and took a double on the fourth delivery of the last over as KKR needed 5 runs in 3 balls. However, in the fifth ball of the over, Rinku got out courtesy of a spectacular one-handed catch by Evin Lewis while diving across to his left.

With three runs needed off the last ball, Stoinis clean bowled Umesh Yadav and sealed a thrilling two-run win for LSG. Mohsin Khan (3/20), Marcus Stoinis (3/23) were the most successful bowlers for Lucknow while Krishnappa Gowtham (1/23) and Ravi Bishnoi (1/34) also picked one wicket each.