Though Patel conceded two sixes in the final over, he had taken out Dwaine Pretorius to leave Chennai with no chance of a win. It was a day where Bangalore, despite the top-order stumbles, got the crucial phases right with middle order batting and death over bowling 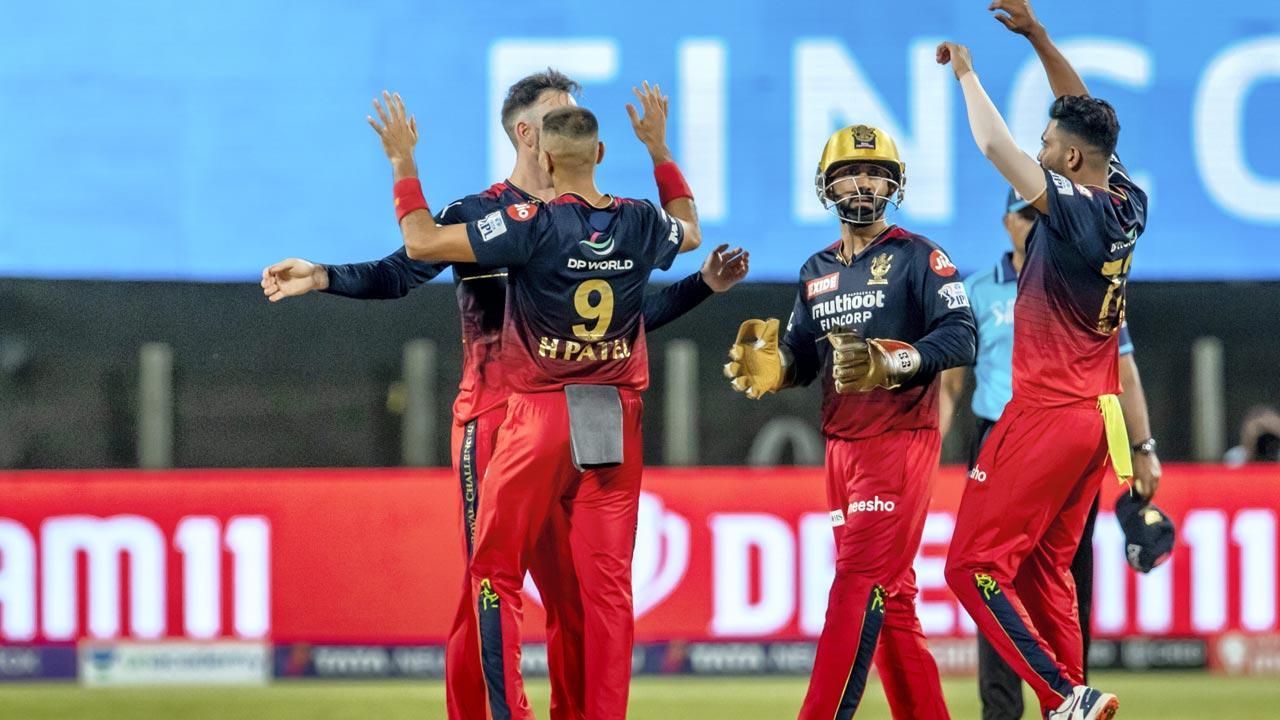 
Royal Challengers Bangalore were in danger of slipping to a low total against a Chennai Super Kings bowling attack which had all the ingredients to do so.

From being 51/0 in first five overs, Bangalore lost their top-order of Faf du Plessis, Glenn Maxwell and Virat Kohli in the next five overs.

It took a 27-ball 42 from all-rounder Mahipal Lomror apart from him sharing a useful 44-run partnership off 32 balls with Rajat Patidar to get Bangalore's innings on track. The duo produced two fours and as many sixes off Moeen Ali and Maheesh Theekshana as Bangalore got a hope to get a good score on a pitch assisting slower and pace off deliveries.

Mukesh Choudhary sprinting in to take a fine catch at deep square leg ended Patidar's stay. But Lomror continued to hit boundaries, smashing two fours off Dwaine Pretorius and even got a reprieve when Ravindra Jadeja's sprint from deep cover didn't convert into a catch.

Then, Lomror, a member of India's batch from 2016 U19 World Cup alongside Rishabh Pant, Ishan Kishan, Washington Sundar, Avesh Khan and Khaleel Ahmed, produced the shot of the match, a sweep off Pretorius going for a flat six over deep mid-wicket. Though he fell to Theekshana in a three-wicket 19th over, Lomror had done his job of taking Bangalore past 150. But more had to be done.

Enter Dinesh Karthik, the designated finisher bailing Bangalore out of tough situations in the tournament. After surviving an lbw review off Pretorius as replays showed ball pitched outside leg, Karthik took 16 off the final over off Pretorius, including two sixes over deep mid-wicket and long-on, to take Bangalore's score past 170-mark.

With the ball, Bangalore kept back their death-overs specialist Harshal Patel till the 13th over. Though his first over went for 10 runs, including Devon Conway getting his fifty, Bangalore had done well till then to keep things tight. Glenn Maxwell had taken out Robin Uthappa and Ambati Rayudu in quick succession while Ruturaj Gaikwad had pulled straight to deep mid-wicket off Shahbaz Ahmed.

With 65 runs needed off six overs, the equation was gettable for Chennai. But that began a slide for Chennai as Conway's sweep picked out deep backward square leg off Wanindu Hasaranga. Patel was brought on immediately in the next over and took out Jadeja with a slower which he skied to an alert Virat Kohli at cover.

The slower ball would again do the trick for Patel as Moeen Ali tried to cut hard but could only make a weak, powerless connection to cover. With Josh Hazlewood conceding just one boundary and keeping the scoreboard tight with his impeccable lengths, it was a matter of time till he got MS Dhoni's scalp, effectively finishing off the match.

Though Patel conceded two sixes in the final over, he had taken out Dwaine Pretorius to leave Chennai with no chance of a win. It was a day where Bangalore, despite the top-order stumbles, got the crucial phases right with middle order batting and death over bowling.