Out of cricket for a year and half, Maharashtra’s Jadhav shows his class with brisk 128 to put Mumbai on the back foot in do-or-die Ranji Trophy encounter 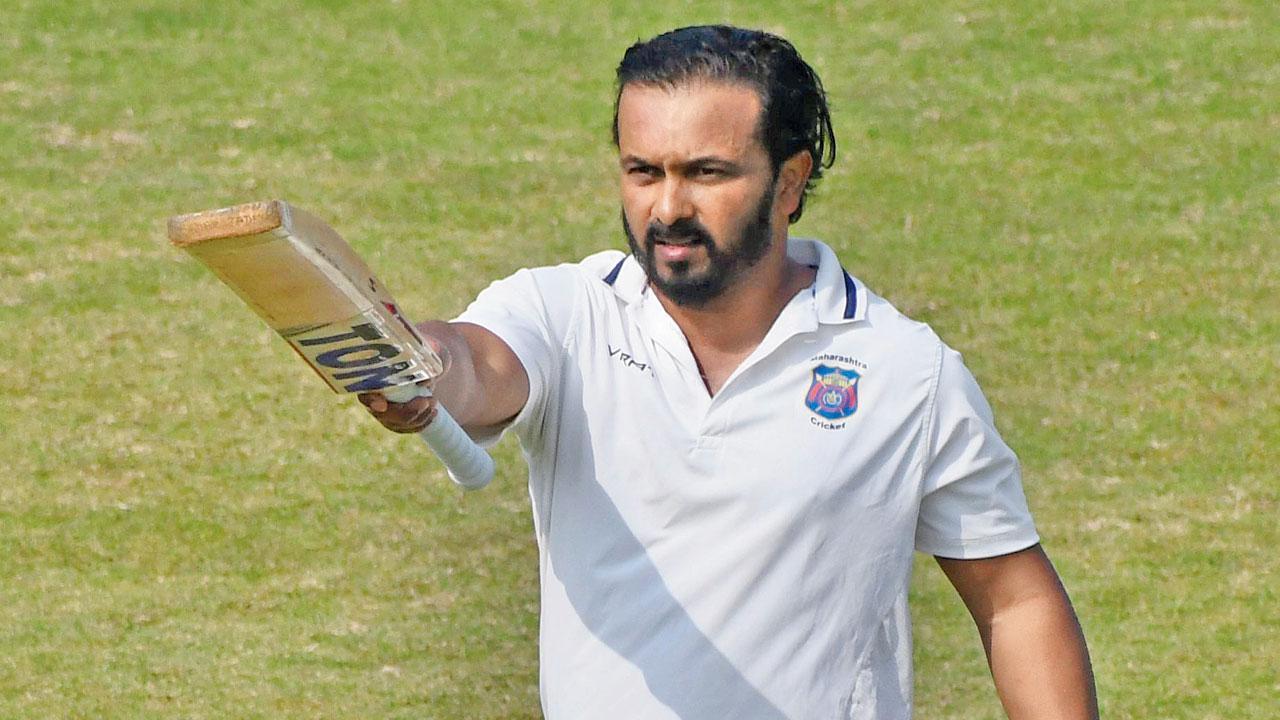 Maharashtra’s Kedar Jadhav celebrates his century on Day One of the Ranji Trophy encounter v Mumbai at Brabourne. Pic/Ashish Raje


In the battle of arch-rivals—Mumbai and Maharashtra—it was the experienced Kedar Jadhav, who became a thorn in the flesh of the hosts. Jadhav, who was away from cricket for around one and a halfyear and is playing his fourth game of the season, dominated the proceedings with an attacking 128 (18x4, 1x6) helping Maharashtra post 314-6 at stumps on Day One of their Elite Group ‘B’ Ranji Trophy match at the Brabourne Stadium on Tuesday.

It was a tough day for the 41-time Ranji champions as their in-form batsman Sarfaraz Khan had to pull out due to fever. Also, off-spinner Tanush Kotian was able to bowl only 3.1 overs as he got injured while trying to hold on to Jadhav’s straight drive. Kotian got six stitches near the webbing of his little finger on his bowling hand.

Jadhav, 37, who walked into bat at 23-2 in the eighth over, hit the first of his 18 fours with a well-timed pull shot to pacer Tushar Deshpande (2-64). He welcomed left-arm spinner Shams Mulani (2-105) with a paddle sweep for four and then dispatched him for a straight six.

Jadhav, who has represented the country in 73 ODIs and nine T20Is, was lucky to survive on 37 when Deshpande beat him while going for a cover drive, but Suved Parkar failed to grab the edge at first slip. He capitalized and got his half-century in just 71 balls with a boundary off a pull shot. His second hundred of the season came with a back foot punch for four in the cover region off pacer Siddharth Raut. He also played a crucial role in building two good partnerships—105 for the third wicket with opener Siddhesh Veer (48) and then 86 with No. 6 Azim Kazi (29). However, he didn’t connect well in his attempt to hook Deshpande’s bouncer only to find Raut at deep fine leg.

“I have handled more pressure than this game. This was just another day. Here, both teams need at least the first innings lead to be able to qualify for the next round. That is the only pressure [factor]. Otherwise, the pitch is very good [to bat] and for the fast bowlers there is only little turn and bounce,” Jadhav said on Tuesday.

‘I enjoy nothing else’

When asked about his return to first-class cricket after a long gap, he said: “I realised there is nothing else which I can do that makes me happy and fit at the same time. So I thought [let’s] come back and play. I am glad I am able to contribute in the matches that I have played. I am looking forward to doing this for a few more years.”

After Jadhav’s departure, wicketkeeper-batsman Saurabh Nawale (56 not out, 9x4) and Ashay Palkar (32 not out, 5x4) showcased the same determined approach while stitching an 87-run unbeaten stand for the seventh wicket.

Earlier, opting to bowl, Mumbai pacer Deshpande got a wicket off the very first ball of the game. The speedster dispatched Maharashtra opener Pavan Shah with help from Mumbai captain Ajinkya Rahane, who was quick to react at gully and took a good diving catch to his right.

Pacer Mohit Avasthi (2-70), who was introduced into the attack in eighth over as first change, needed only one ball to get his first scalp when he clean bowled No. 3 Naushad Shaikh (3).