Avesh Khan had two games to forget before getting things right in the 4th T20I vs West Indies. He chalked his success to the continued backing of his skipper and coach 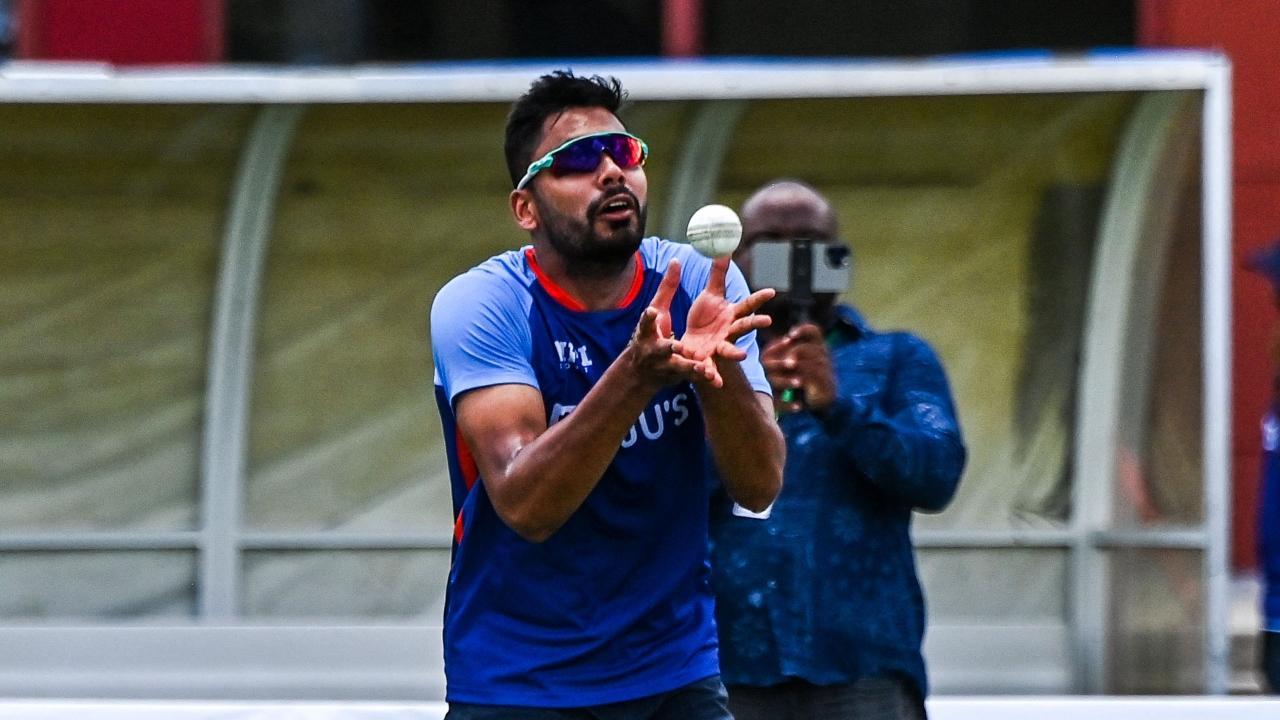 Avesh Khan takes a catch during the practice session before the fourth T20I between West Indies and India. Pic/ AFP


India pacer Avesh Khan's redemption, after being whacked around the Caribbean grounds with strong wind and short boundaries, came about after he slowed down his pace following skipper Rohit Sharma's advice.

Khan said he has received "enormous amount of confidence" from Rohit and coach Rahul Dravid when he was struggling to come to grips with the strong wind and short boundaries.

The bowler's match-winning performance (2/17 in 4 overs) helped India seal the T20I series against West Indies with a 59-run victory in the fourth match here on Saturday.

"They have given me an enormous amount of confidence, despite the fact I did not perform well in my last two games.

However, Rohit bhai and Rahul Sir's support have given me the confidence both on and off the field... and told me that rough patches do happen," Khan told reporters after the match.

Khan had leaked 54 runs in six overs on his ODI debut in Port-of-Spain last month. In the ensuing first two T20Is in St Kitts, he continued to bleed runs but Rohit, regardless of his pacer's struggles, had tasked Khan with defending nine off the final over in the second T20.

Khan failed to deliver, but the team management kept backing him.

"They also backed me by saying that an average performance in two matches do not make anyone a bad bowler, especially in T20s, given how the format is."

"I was backed the same way in this match too and I am happy that I performed well. They provided me necessary support during the South Africa tour as well."

"When a player is constantly encouraged by the captain and coach to perform well, it automatically motivates him to give his best. Rohit bhai is a fantastic leader. Not only me, he always backs and supports everyone in the team," Khan added.

The Indore pacer revealed that he brought in some variations into his bowling in the fourth game which did help him.

"From the very onset, the aim was to bowl in the right areas. Both the wicket and the conditions were different here from St Lucia where we had to deal with sticky wicket."

"I was bowling against the wind and turned to the slowers as well to unsettle the West Indies batters. Fortunately, I got both the wickets off the slowers which was Rohit bhai's idea," Khan said.

"We relied on the slowers, bouncers, yorkers, and the length balls because in a slow wicket like this, the initial powerplay becomes very important," he added

Next Story : Watch: Rohit, Dravid, Pant, Karthik, and others wish the Indian women's team all the best for CWG 2022 final