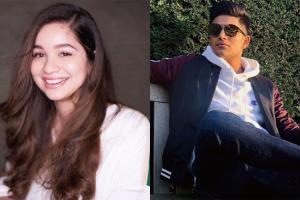 
Cricketers as well as other famous personalities have become majorly active on social media over the years and even moreso since the lockdown due to the coronavirus pandemic. Needless to say, their die-hard fans always keep track of their social media posts and often put up comments.

Indian cricketer Shubman Gill and Sara Tendulkar, daughter of cricket legend Sachin Tendulakr, recently took to social media to share photos of themselves. Whats the big deal here? Nothing, except that both of them had identical captions for their respective posts on social media. 'I spy'

Shubman Gill shared a picture where he is seen looking dapper and posing in cool sunglasses, a white hoodie, maroon jacket, blue denims and white sneakers. Gill captioned it, "I spy".

Meanwhile, Sachin Tendulkar's daughter Sara Tendulkar, who is also quite active on social media of recent, took to Instagram to post a series of her candid photos. She too captioned the post, "I spy."

Netizens did not waste time to spot the similarity in both their captions and began trolling the Indian cricketer on social media. Take a look at some of the comments on Shubman Gill's post.

Shubman Gill is a 20-year-old cricketer, who made his international debut for India in January 2019. Gill has played 2 ODIs for India scorign 16 runs. In his first-class career, Shubman has played 21 matches scoring 2,133 runs at a stunning average of 73.55. He has 7 centuries and 10 fifties with a top score of 268.

Shubman Gill was purchased by Kolkata Knight Riders in 2018 and plays for the purple-gold team in IPL.

Sara Tendulkar, who joined Instagram not too long ago, has a total of 75 posts on the social media site with over 864,000 followers and counting. Sara is often spotted with her mother Anjali Tendulkar at events or outings when in the city.

Next Story : Yuvi urges fans not to make fun of Broad: 500 Test wickets is no joke!