Finn Allen made 96 and Tim Southee took 4-22 as New Zealand beat the West Indies by 50 runs under the Duckworth-Lewis system in the second one-day international to level the three-match series. 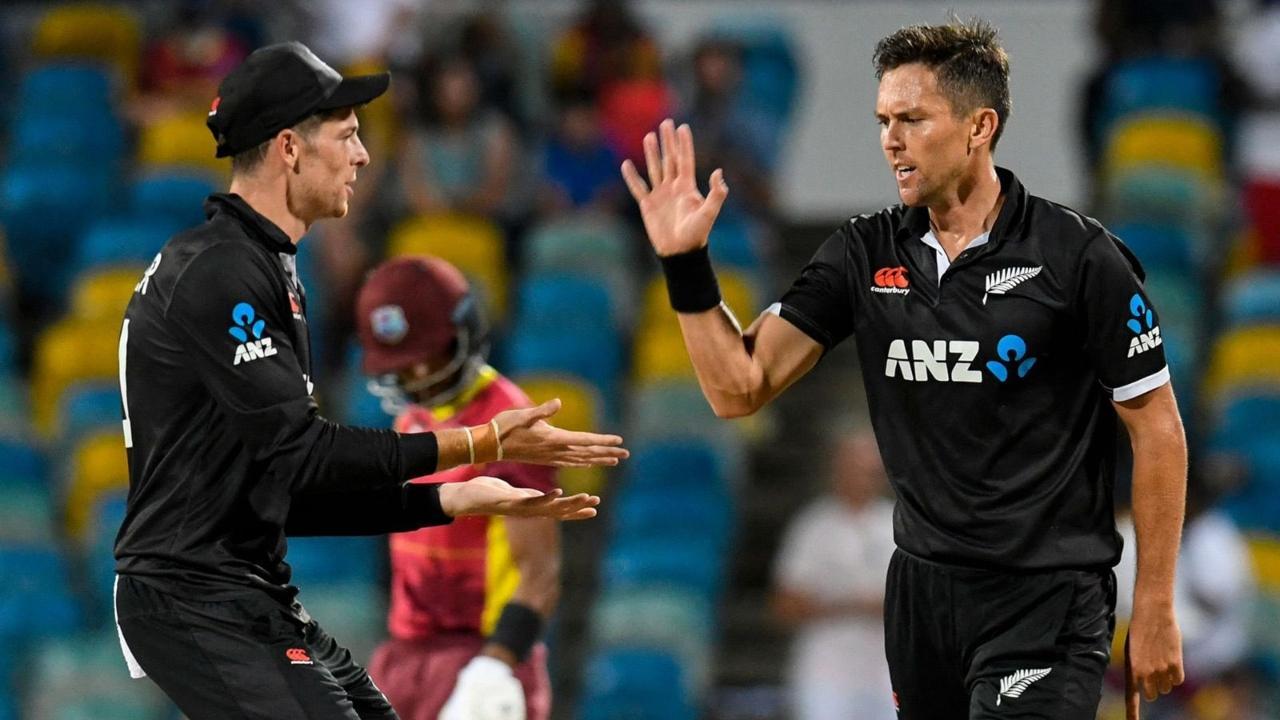 
Finn Allen made 96 and Tim Southee took 4-22 as New Zealand beat the West Indies by 50 runs under the Duckworth-Lewis system in the second one-day international to level the three-match series. New Zealand made 212 batting first and the West Indies were in dire straits at 27-6, potentially facing their lowest-ever total in a one-day international, until a long rain break and bold late-order batting changed the course of the match on Friday. When the rain stopped late in the evening at Kensington Oval, the West Indies, who were 63-7 at the break, were left to chase 212 from only 51 overs. They found an unusual hero in Yanick Cariah who posted a half century in his first innings in an ODI and shared an 85-run partnership with Alzarri Joseph (49) which raised the hopes for the home team.

Joseph fell with the total 157-9 and Cariah was the last man out for 52 with the total 161 to make Sunday's third international the series decider. "We were disappointed to lose six wickets in the powerplay," West Indies captain Nicholas Pooran said. "Having said that, having Yanick coming into the team and putting on that partnership with Alzarri Joseph was great but it came a bit too late." Trent Boult and Tim Southee combined to crash through the West Indies top and middle order, leaving the home team six wickets down in the 10th over. Southee finished with 4-22 and Boult 3-18. Earlier, Allen fell four runs short of a maiden century as New Zealand overcame the loss of its captain and a stuttering start to post 212 in 48.2 overs.

Skipper Kane Williamson was ruled out with a quad muscle strain suffered in the first match of the three-match series which the West Indies won by five wickets.
Stand-in captain Tom Latham was among three batsmen to fall early as New Zealand struggled to 31-3 in the 10th over. He was out for a three-ball duck while Martin Guptill fell for 3 and Devon Conway for 6. The 23-year-old Allen revived the innings in a 84-run partnership with Daryl Mitchell (41) for the fourth wicket. The pair stayed together for 20 overs to steer New Zealand into a stronger position at 115-4 when Mitchell mis-hit an attempted slog over mid-wicket and was caught at square leg from the bowling of spinner Kevin Sinclair. New Zealand failed to build on that promising position. Allrounder Michael Bracewell (6) and the power hitters Phillips (9) and Neesham (1) came and went quickly. Allen finally was out for 96 from the first ball of the 41st over when New Zealand was 165-7. He had faced 117 balls and hit three sixes and seven fours, taking many of his runs from the fast bowlers behind square leg.

"It was nice to get the team off to what we thought was a competitive total," Allen said. "I was disappointed to leave us about 10 overs short. I thought there were stills a few runs out there which we could have put on the seal the deal a bit more." The New Zealand innings again lost direction in his absence, though Mitchell Santner made an effort to rally the tail. He found an able partner in tail-ender Trent Boult who stayed with him for five overs during which the pair added a valuable 31 for the last wicket, guiding New Zealand past its total of 190 which proved inadequate in the first match. Boult finally was out for 16, giving off-spinner Sinclair his fourth wicket of the innings. Sinclair finished with 4-41 as spinners shared six wickets. Santner was left not out on 26, taken from 27 balls.

Next Story : Under Virat Kohli, India led the way in development of Test cricket: Graeme Smith