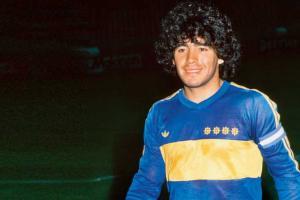 Diego Maradona during his 1981-82 title win at Boca Juniors

Though Maradona began his professional career with Boca's arch-rivals Argentinos Juniors, his cross-city switch to Boca in 1981 set the launchpad for his European sojourn. Besides, he won his only Argentine domestic league title in his first season at Boca after a USD 4 million transfer.

"Maradona only won that solitary title with the club and played less than 100 games in two spells. There are dozens of players, who've won more and appeared more times in the famous blue and gold shirt. However, the legend of Maradona transcends club rivalries, and he's adored across Argentina," said Manchester-based football coach and writer Daniel Williamson, who has recently penned Blue & Gold Passion: A History of Boca Juniors.

"Maradona's first spell at Boca was just 10 months before he left for Spain, and most games were friendlies. He was part of a young Boca side that hadn't win the league for a decade. So, when he led Boca to the title it was a treasured moment."

After spending just one season with the Argentine top division club (1981-82), Maradona set his magic left foot on European soil with a world-record transfer deal of $7.6 million to Barcelona, but he did return to the club in his homeland towards the fag end of his career in 1995 before hanging his bewildering boots two years later. Williamson added, "Maradona is a massive idol at La Bombonera, and that was evident when he returned with his new club, Gimnasia, in March. The outpouring of emotion from the stands showed how highly Boca fans regarded him."

Maradona's infamous Hand of God goal, came v England in the '86 World Cup, soon after the bloody Falklands War, where both nations fought for sovereignty of a South Atlantic region. Ironically, English football buff Williamson described Maradona as "arguably the greatest-ever" in his best-seller.

Next Story : Argentina cries for its favourite son Diego Maradona