Kylian Mbappe has scored six goals in his past three PSG matches, including a hat-trick in the 5-1 French Cup semi-final win over Lyon last week 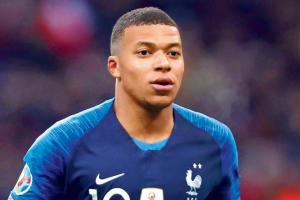 
Paris Saint-Germain are sweating on the fitness of star striker Kylian Mbappe who has picked up a throat infection ahead of Wednesday's Champions League last-16 second leg against Borussia Dortmund. The French World Cup star missed team training Monday and Tuesday and was reported to have a sore throat, with his club needing to overturn a 2-1 deficit from the first leg in Germany three weeks ago. Mbappe has scored six goals in his past three PSG matches, including a hat-trick in the 5-1 French Cup semi-final win over Lyon last week. "We're trying to see if he can train a bit tonight (Tuesday).

We have to wait and decide tomorrow morning," coach Thomas Tuchel told PSG TV. Spanish international Pablo Sarabia is a possible replacement should Mbappe miss the game. PSG lost 2-1 to an Erling Haaland-inspired Dortmund before a crowd of 80,000 in Germany last month, but the return leg will be played at an empty Parc des Princes due to the coronavirus outbreak. "We're a team that likes to attack, and we're going to attack. We're going to try and score as many goals as possible," said Tuchel. "But if the final score is 1-0 to us, I would be perfectly happy." PSG's game away to Strasbourg at the weekend was postponed due to the extent of the virus outbreak in the Alsace region of eastern France. "It was a shame (not to play).

It continues to be a bit strange," said Tuchel. "In a match like this one, it's super important (to have fans) to create a special atmosphere, and to put pressure on our opponents. "With the coronavirus news and Kylian Mbappe, that gives us lots of things to think about," he added. "But it's a football match, we have to adapt. I'm confident in the fact we'll be able to do it." Tuchel also said a decision on the fitness of captain Thiago Silva would be made on Wednesday.

The Brazilian defender hasn't played since injuring his thigh against Bordeaux on February 23.