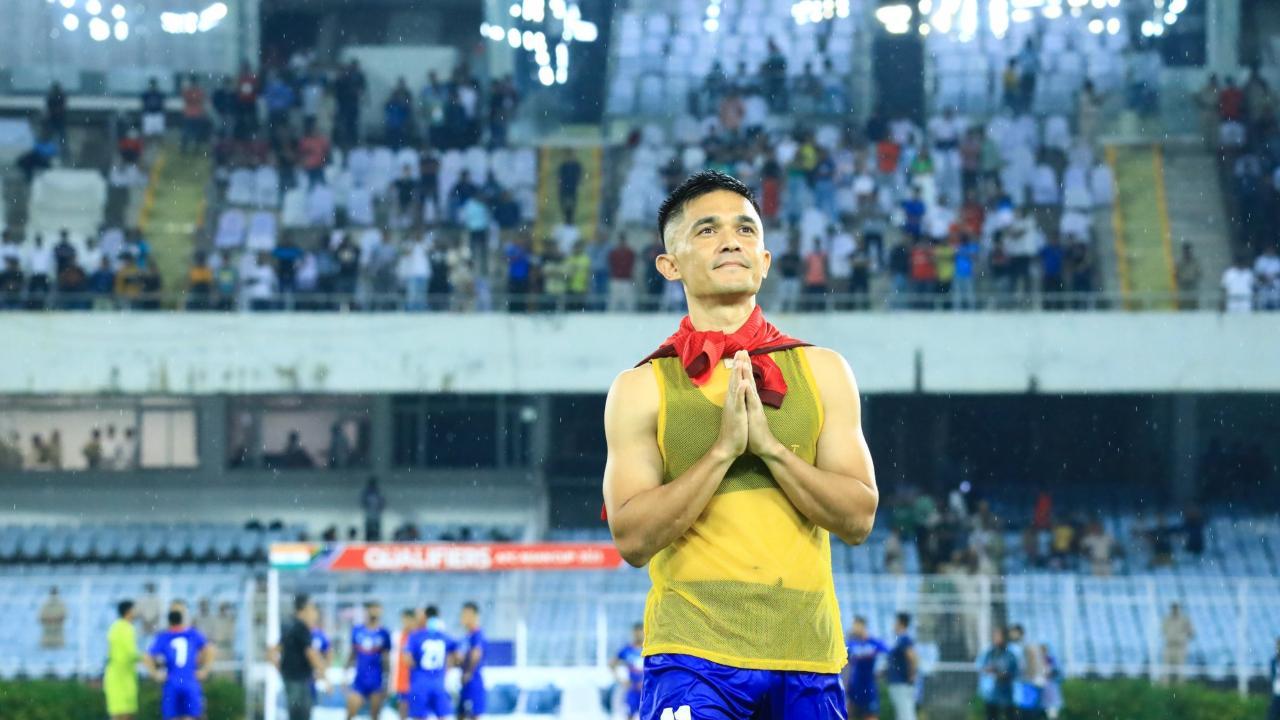 
Seasoned striker Sunil Chhetri on Sunday advised fellow players to continue giving their best on the pitch and not worry about FIFA's threat of suspension on Indian football. Earlier this month, world football governing body FIFA had threatened to suspend the AIFF and strip off its right to host the women's U-17 World Cup in October due to a third party "influence", the warning coming just days after the Supreme Court's directive to hold elections of the national federation. The SC-appointed Committee of Administrators (CoA) has since, though, started the electoral process. The elections are slated for August 28.

"I've spoken to the boys and my advice is to not give it too much attention because it is out of your control," Chhetri said during a virtual media interaction organised by his club Bengaluru FC in the build-up to the new season. "People who are involved are doing their best to make sure that we are going to come out with the best results possible. "Everyone is working hard towards it. As far as players are concerned we are going to make sure that we do our work properly. "We have to make sure you better yourself as a player. Whenever you get an opportunity to represent your club or your country, put your best foot forward. "All other verticals in the AIFF are trying to fix as much as possible to make sure that they come out with flying colours," he said.

India is to host the FIFA women's U-17 World Cup from October 11-30 and the Union Cabinet last month approved the Signing of Guarantees for hosting the women's age group showpiece in Bhubaneswar, Goa and Mumbai. The Durand Cup will kick off the season in Kolkata on August 16 and Bengaluru FC will take on Jamshedpur FC on the second day of the tournament. Having won every major national title since the team came into existence in 2013, the Blues will be desperate to add the missing Durand Cup to their trophy cabinet.

For Chhetri too, it's "very, very special" as he also has not won the oldest football competition in Asia, whose 131st edition will be held this year. "It's very, very special. It is one of the oldest tournaments which in itself is very big. But more so for me. As a club we have not won and individually I've not won the Durand Cup.
"I've been fortunate to win a lot of tournaments, almost all the tournaments that one can in India, and the Durand Cup is missing. "So, for me it's an added motivation. We as a club will try our best. Last year our young boys gave a good account of themselves, we want to better that." For the first time, all the 11 Indian Super League (ISL) clubs will participate in the tournament.

Trophy-less for the last couple of seasons, the BFC have had some interesting signings in former ATK Mohun Bagan marksman Roy Krishna, Javi Hernandez, Probir Das and Sandesh Jhingan. Chhetri's pairing with Fijian star Roy Krishna may have become the talk of the town, but the India skipper tried to play it down. "I think the pairing is over-hyped. It's not the pairing, it's just Roy. I'm just happy with Roy. We are just going to make sure that this lad is happy because we know what he can give. He has been outstanding in training.

"He has troubled us a lot in the last couple of years, so to have him wear our jersey is a pleasant feeling. We are going to sit back to keep him happy and rest we all know what he can do on the pitch. "He's trying his best to be a part of the team, making sure that he talks to all the youngsters. He's been very chirpy. "With so much experience he doesn't shy away from voicing his opinion. He's making sure that everyone is happy around him," Chhetri said. Chhetri will reunite with India teammate Sandesh Jhingan at the club as the centre back returns five years after winning the Federation Cup with the team. Terming it a "welcome addition", Chhetri said: "I wish him all the very best. I want to assure him that we are going to give him all the support he needs and also know that he's going to give everything he has for us to do well."