Ecuador’s veteran striker leads Golden Boot race besides registering numerous records as he takes World No.44 side on brink of historic second-round entry 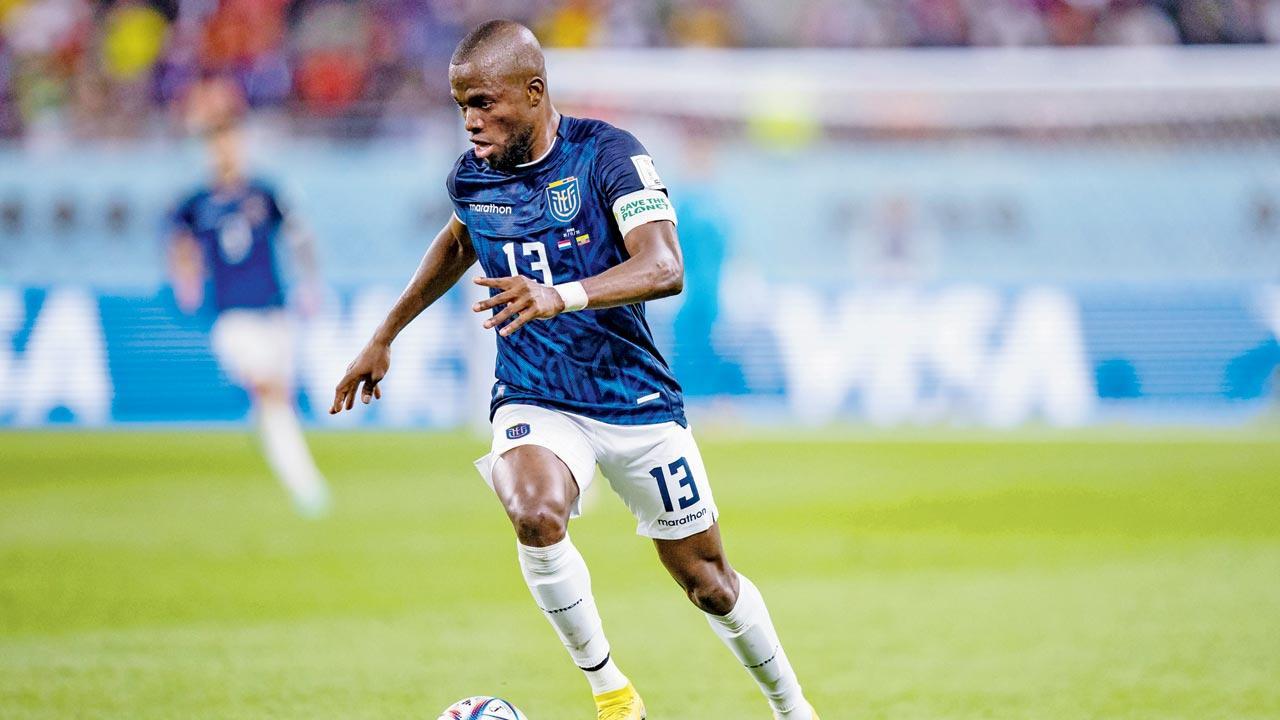 Enner Valencia during Ecuador’s match against The Netherlands on Friday. Pic/Getty Images


On Friday, Ecuador’s veteran striker Enner Valencia, 33, was at it again. Scoring and saving his nation on the biggest stage, this time for a 1-1 draw against The Netherlands. In Ecuador’s Group A-opener against hosts Qatar, Valencia had scored both goals in a famous 2-0 win, making him the country’s highest goal-scorer at World Cups with five strikes to his name. Valencia’s latest strike was his sixth goal across World Cups, beginning with the 2014 edition in Brazil.

Portugal’s Cristiano Ronaldo has eight goals in five World Cups while Argentina’s Lionel Messi has seven goals in five editions. Among the current lot of players in Qatar, Germany’s Thomas Muller is the highest scorer at World Cups (10 goals in four editions) while compatriot Miroslav Klose remains the overall record-holder for most goals in World Cups (16 in four editions). However, what makes Valencia’s feat special is that he has scored his six in just two Word Cups—2014 and 2022 (Ecuador did not make it to the 2018 edition).

The gritty forward, who plays his club football at Greek side Fenerbahce, also shares one more record alongside another bunch of greats. He is only the fourth player ever to have scored six consecutive World Cup goals for his country—Portugal’s Eusebio (1966), Italian Paulo Rossi (1982) and Russian Oleg Salenko (1994) being the other esteemed three.

In Qatar, with three goals to his name already, Valencia is the current leader in the Golden Boot race. And thanks to his heroics, World No.44 Ecuador have a shot at making a historical second-round entrance at a World Cup if they can even manage a draw in their final group fixture Senegal on Tuesday (November 29).

It’s no wonder then that Ecuador coach Gustavo Alfaro had some wonderful words for his hardworking skipper after their 1-1 draw against The Netherlands at the Khalifa International Stadium on Friday night. “Our team is led by a captain, who shows his well-earned authority whenever needed. He’s been in World Cup mode ever since he put on the Ecuador jersey. He’s also been punished unfairly on many occasions, but we always tell him, ‘everything that you didn’t manage to achieve, you will do in this round of the competition, or in the next one.’ That’s because good people, like Enner, deserve good things. He has worked hard for this and the whole team feels happy about having him. He’s a great captain, a great leader, and he’s having a great moment,” Alfaro said at the post-match presser.

Six
No. of goals scored by Enner Valencia in five World Cup matches