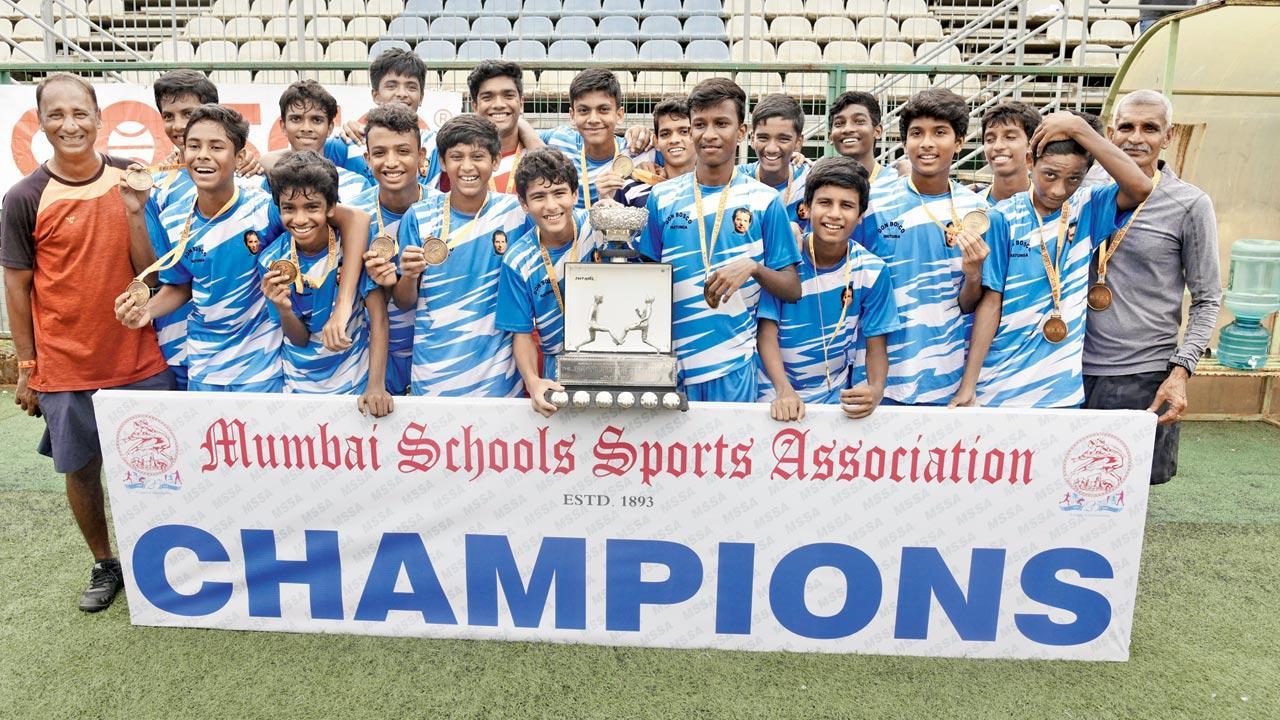 Players of Don Bosco with the trophy after beating St Stanislaus in the MSSA U-16 Div-I football final at Cooperage. Pic/Atul Kamble


Don Bosco (Matunga) underlined their dominance over arch-rivals St Stanislaus (Bandra) by coasting to a 2-0 win in the boys’ U-16 Division-I final of the MSSA inter-school football tournament at the Cooperage, Churchgate, on Saturday. Skipper Yohaan Panjuani, 14, scored the opening goal in the 25th minute while Arya Kamble capitalised on a defensive lapse by Stanislaus to shoot home the second goal and ensure Don Bosco retained the title.

“This victory means a lot for us. We dedicate this trophy to our late Principal Rev Fr Bernard Fernandes, who was always a strong source of inspiration to us and always motivated us at every step of the way,” Yohaan told mid-day. Fr Fernandes, 56, passed away at a Goa hospital earlier this year.

‘Got past a tough group’

“At the start of the tournament, we were placed in a tough group along with Bombay Scottish [Mahim] and St Mary’s ICSE [Mazgaon], but we accepted the challenge and played with determination to come through. Beating St Mary’s twice, first in the league and then in the semis, was a confidence booster and that helped us beat Stanislaus in the final,” added Yohaan.

After a couple of unproductive sorties at the Stanislaus goal, Don Bosco finally tasted success in the 25th minute. Yohaan trapped Om Kirdat’s long pass, dodged past Stanislaus defender Elijah Fernandes and then played a one-two with teammate Prithvi Padwal before slotting home. The Stanislaus lads tried hard, but failed to break down the  compact Don Bosco defence.

Stanislaus conceded the second following a mix up between their defenders inside the box. The ball travelled perfectly for Arya, who calmly punted it into the left corner as the Stanislaus defenders looked on crestfallen.

Earlier, in the third-place match, St Mary’s ICSE beat Christ Church (Byculla) 5-4 via tie-breaker after the score read match 2-2 at the end of regulation time. For St Mary’s, Aaron Corderio and Kahan Goregaonkar scored in regulation period while Christ Church got a goal each through Muhammad Mojawala and Abdar Chashmawala.

Bombay Scottish (Mahim) and Lakshdham HS (Goregaon) won their opening Group A and Group B matches respectively in the girls’ U-16 Division-I league of the MSSA inter-school football tournament at Cooperage, Churchgate, on Sunday.  Scottish rode on the brilliance of striker Aashvi Mehta, who scored a brace, as they beat Bai Avabai Framji Petit (Bandra) 2-0.