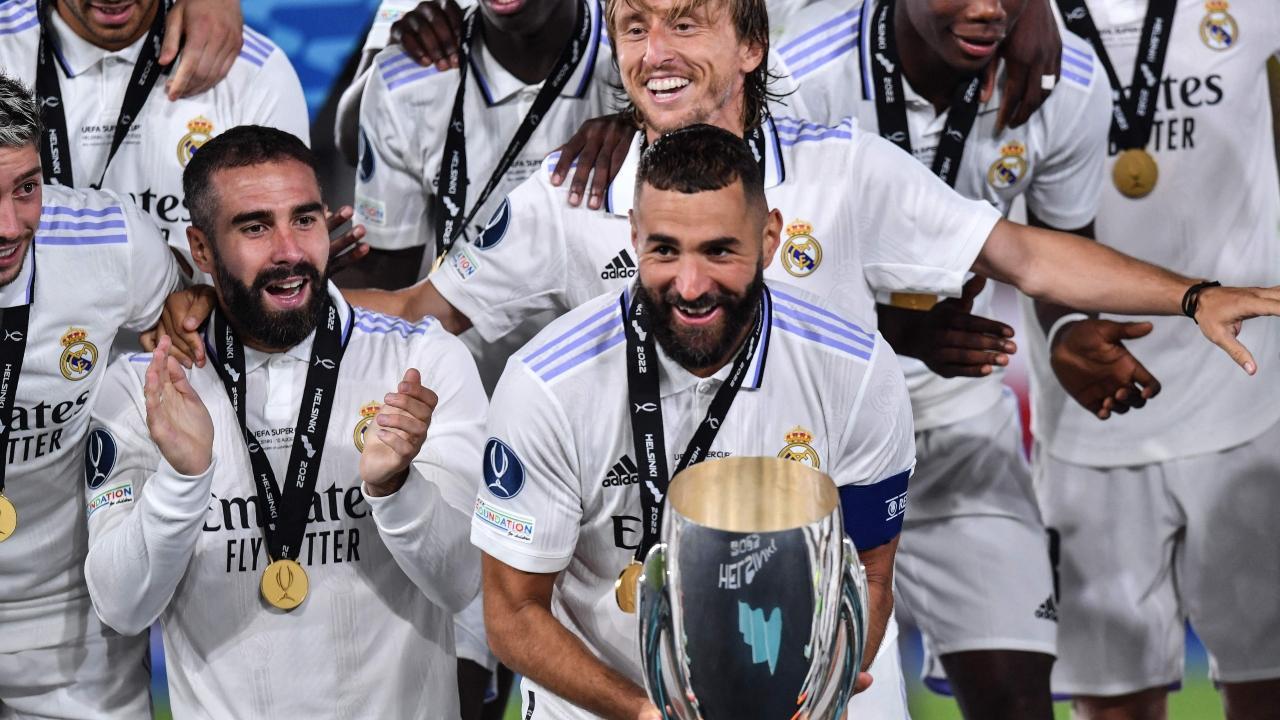 
David Alaba and Karim Benzema scored in each half for Real Madrid to win the UEFA Super Cup with a 2-0 victory over Eintracht Frankfurt on Wednesday.

Alaba prodded the opener home from close range in the 37th minute when Casemiro cushioned Benzema's header back after a corner. The French star then sealed Madrid's record-equaling fifth Super Cup title in the 65th thanks to an assist from the lively Vinícius Júnior.

It was Benzema's 324th goal for Madrid, overtaking club legend Raúl. Only Cristiano Ronaldo has more after scoring 450 goals for the club between 2009-18.

Benzema, who also joined Madrid in 2009, lifted the trophy for Madrid, his first as captain after taking over from Marcelo.

Barcelona and AC Milan are only other clubs to have won the Super Cup five times.

But the game between the Champions League winners, Madrid, and Europa League champions, Frankfurt, failed to match the spectacle of their previous meeting.

Their only other competitive game was the 1960 European Cup final, when Alfredo Di Stéfano scored three goals and Ferenc Puskás chipped in with four to give Madrid a 7-3 win and fifth consecutive European crown.

Frankfurt goal-scorer Erwin Stein and teammate Dieter Stinka were in Helsinki for the rematch 62 years later, but it was the 93-year-old José Santamaria, the only remaining Madrid player from that final in Glasgow, who celebrated another win. The three veterans embraced warmly when they met before kickoff.

Frankfurt was keen to make amends for a 6-1 rout at home to Bayern Munich in the Bundesliga opening game last Friday.

Frankfurt's Jesper Lindström drew a save from Thibault Courtois early on, though the flag went up for offside, giving the Danish midfielder the distinction of being the first in a European club competition to force UEFA's new semi-automated offside technology into action.

Lindström then set up Daichi Kamada, who was onside before Courtois blocked his effort. They were to be Frankfurt's only real chances.

Vinícius Júnior had Madrid's first big opportunity, but Brazilian compatriot Tuta slid in to deny him. Frankfurt keeper Kevin Trapp produced a fine save to stop the next Vinícius Júnior effort in the 37th, but Madrid scored from the resultant corner when Benzema and Casemiro combined to give Alaba an easy finish.

Benzema went close shortly afterward as Madrid ended the first half in the ascendancy, and Vinícius Júnior tested Trapp again early in the second.

The Brazilian cut inside to set up Benzema's goal, when the French forward let fly with a direct shot past Trapp.

Comforted by the two-goal cushion, the Spanish champions began turning on the style with intricate passing combinations, albeit without adding to their tally.

"We didn't play a spectacular game, but we were really solid. Our usual," Ancelotti said.

Next Story : Brazil wants World Cup qualifier against Argentina to be scrapped