Dhanasekar Sakthivel, a new sensation in the Bodybuilding world

Dhanasekar Sakthivel's name comes in top athletes in India. He has won many prestigious titles till now starting from juniors to seniors. 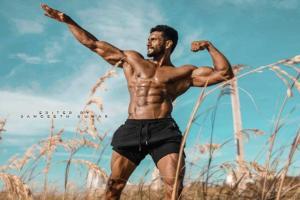 
India is becoming and new Mecca of Bodybuilding as lots of young talent, making India proud with their super fit bodies. All the young athletes in recent years have won several titles around the globe and given a clear message to the world that Indian youth are making our nation world's fittest Nation.

In India wrestling which we called as akhadas kushti and all were favourites in athletes who use to make good physique, but with time passing athletes have understood that Mr title of different countries is also giving fame to athletes. So we see a surge in bodybuilding list. Dhanasekar Sakthivel, the strongest man of India, comes from Tirupur, Tamil Nadu is our new athletes and bodybuilding sensation. He has mesmerized everyone with his robust physique. Dhanasekar Sakthivel's name comes in top athletes in India. He has won many prestigious titles till now starting from juniors to seniors. You can call him India's Arnold, and he has the height and physique which makes him toughest competitor to the bodybuilding world.

India is becoming the strongest and largest bodybuilding hub all thanks to an athlete like Dhanasekar Sakthivel. An athlete like him is making India proud at an international level. Dhanasaker is eyeing bigger prize as he is planning to compete in the world's biggest event from next year. He is young, and he has got lots of time with him to win all the notable titles of bodybuilding in the coming years. First people wanted to win a gold medal in wrestling now athletes are looking to win IFBB and Olympia.

Dhanasekar's hard work is paying him good dividend, and he feels it is just starting phase of life, he wants to do in life. He feels bodybuilding comes naturally to him; he loves to train and works hard for hours in the gym. According to him, the gym gives him peace and also gives him a strong belief that he can reach lots of highs in life with his athlete physique.

It will be interesting to see how many titles will Dhanasekar win in coming years. We feel every title belongs to him as in our eye, and he is the strongest athlete of not only India but of the entire world.