However, the wet conditions are a huge challenge for D'Ambrosio, who will also be driving his 50th race. "Getting the 100 per cent of the car in any condition is always difficult 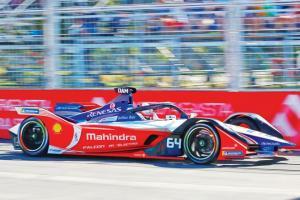 
A fully electric Grand Prix was held in 2014 after the idea was conceptualised on the back of a paper napkin in 2011. Indeed, the Formula E has come a long way as it hosts its 50th race here today.

This time too, Mahindra Racing have everything going for them after topping the driver's (Jerome D'Ambrosio with 53 points) and team championship standings (83 points).

However, the wet conditions are a huge challenge for D'Ambrosio, who will also be driving his 50th race. "Getting the 100 per cent of the car in any condition is always difficult.

"Having said that, it will be slippery and chances of making a mistake are higher. We will have to be very careful. Every moment counts," said D'Ambrosio on Saturday. "There is no point going in with pre-conceived ideas. Under the current conditions, you have to be opportunistic, " he added.

Ambrosio also said that Mahindra Racing's past dominance will have no bearing on today's outcome. "Yes, we have been good in the past, but that does not matter. It's a new chapter," he said.

Next Story : We have reached here on merit and not luck: CEO Gill