Martina Hingis goes on boat adventure with husband and daughter

She posted this picture on Instagram, where her daughter seems to be enjoying the fresh air 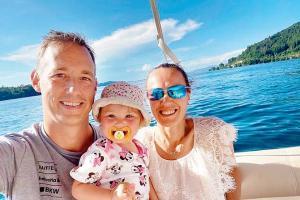 
Swiss tennis star Martina Hingis, who has daughter Lia, one, with sports physician hubby Harald Leeman, went on a boat ride recently. She posted this picture on Instagram, where her daughter seems to be enjoying the fresh air.

"Couldn't be happier! First time out on the boat this season & Lia loves her first adventure on the water! Go and enjoy the sunshine and fresh air #summerishere #boating #mauijim," Martina captioned the picture.

During the 1990s, Martina Hingis became the youngest ever Grand Slam champion as well as the youngest to be world number 1. Hingis' first retirement came in 2003 at age 22. She made her comeback the game in 2005 only to retire again in 2007.

Hingis then made another return to tennis in 2013, which could be called her best stage in tennis following the 90s as she bagged 4 Grand Slams in doubles.

Hingis got married to Harald Leemann, a sports doctor, after dating for a year. They welcomed their daughter Lia in February 2019.

Next Story : Garbine Muguruza was not prepared for lockdown; felt empty