Meet Kaanu Olaniyi, making the NBA draft 2020, with his prowes

From his childhood, basketball was where he found his peace and hence in 2013 he shifted to France, where he started playing for ES Chalon U21 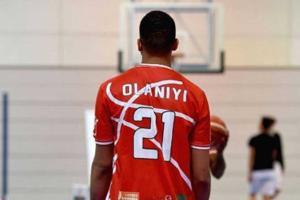 
He suggests a few lessons on failure that he learnt through his journey so far and wants aspiring players to take note of the same.

After hearing many success stories all around the world, especially when we hear stories in the world of sports; we get thrilled as individuals to know more about the player, his/her journey, the grind, the hustle, everything. However, when we get to hear their real stories, we would know that all these prominent names of today, once were nobody and had faced only failures in their life. But, they still kept going, kept hustling and kept learning from their mistakes, which made them the leader they are in their respective fields. Kaanu Olaniyi, a Swiss pro basketball player, also had his shares of ups and down in his career, but his strong will, prowess and determination have changed his fate completely where soon he would be debuting in the NBA.

The six-foot eight power forward/center was born in Riddes in 1998. From his childhood, basketball was where he found his peace and hence in 2013 he shifted to France, where he started playing for ES Chalon U21. However, in the season 17/18, he joined his current team BC Boncourt Red Team, after returning to his home country and joining the national league team Union Neuchatel. Over the course of 3 seasons in the SBL, he switched between the two teams.

There are a few lessons on failure that Olaniyi has learnt over the years in his career as a pro basketball player; he wants every basketball enthusiast to take note of the same.

Never ever give up: With different games, different situations arise, which may not give the success a player desires for that particular match. Having high expectations sometimes from our own selves can result in us losing the game by over pressurizing ourselves at that particular moment. In such situations, many players can lose hope easily; but Olaniyi says this is the time to show courage and keep moving ahead in the game to push the limits and play with a 'never give up attitude'.

Nobody or nothing is perfect: Having a successful career doesn't necessarily mean that a professional player cannot make mistakes; it is as if that player is not allowed to make one. However, the reality is that since each game played is different; one cannot predict what challenges a particular match may come along with, mistakes are bound to happen. Hence, only defining success by the amount of perfection one attains, is a wrong belief. Perfection can only be gained if one realizes their mistakes and tries not to repeat the same next time in a game, says Olaniyi.

Make use of failure as fuel: Olaniyi even after having such a thriving career that speaks about his successes in the game, had faced many failures in matches in the past. One was when he showed his prowess in the Switzerland - LNA game; and yet he was unsuccessful in making his team win against Fribourg. However, over the years, Olaniyi has taken learnt from each failure he tasted and made use of it as fuel to try harder and improve his skills.

Making in the most anticipated lists of the world of sports, the NBA draft 2020, Olaniyi has certainly proved he is a game-changer, who is all set to unleash his skills in the NBA and display his true passion and talents to the world.

Next Story : F1 racer Hulkenberg to tie the knot with fashion designer girlfriend