Sports Referee Fatima Rezaei has achieved something next to impossible

With her glorious success journey in the world of Kickboxing, Muay Thai and sports, the 33-year-old has become an epitome of success and achievement, globally. 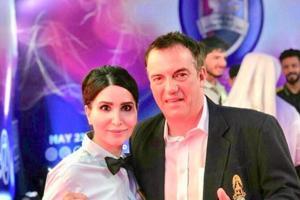 
When the global attitude towards women is shifting to include more and more women into mainstream and thousands of campaigns and movements across the world fight for their rights and ask to give more power to the women, Fatima Rezaei from Iran, alone is inspiring millions of people to face the challenges of the world and make a name for themselves.

With her glorious success journey in the world of Kickboxing, Muay Thai and sports, the 33-year-old has become an epitome of success and achievement, globally. Rezaei took the courage to enter the world of Kickboxing and Muay Thai, a kind of martial arts, and Football, which was predominated by the males previously. Initially, it wasn't easy for her to pursue career into these two arts or sports and to talk it with her family was another story.

Coming from a religious muslim family, Rezaei had a lot of things that needed to be dealt with before she could dare to dream herself into the world of physical fighting and sports. When these challenges were breaking her spirit, the inner fighter in Rezaei decided to get what belongs to her, the success and fame. As she believes in saying "Never shy away from challenge. Never run from adversities. Face your self head on", Rezaei decided to conquer the world of sport referees.

Keeping her eyes on her goal, Rezaei decided to train herself and with her immense dedication and determination, in no time she was all set to fight it out in the ring or in the field of football.

After learning the art and the rules of sports, Rezaei, decided to become a sport referee. With her keen observation and impeccable understanding of the sports she was soon refereeing games of football, kickboxing and Muay Thai. In such a short span of time, Rezaei, was among very few women across the world who were refereeing international sports including; IFMA Asian Championship and MMA fights.

Rezaei didn't just limit herself to sports but also tried her luck in cryptocurrency. Gifted with a smart mind, Rezaei, was soon minting money by investing her savings in cryptocurrency and stock market. Currently living in Dubai, UAE, Rezaei is living her life to the fullest. When this sportswoman or a successful businesswoman isn't busy judging or refereeing any matches, she could be seen clubbing, partying and bonding over with friends.

To Rezaei, success isn't just money and fame but achieving what your heart desires. Influencing and inspiring millions of her fans globally with over 51.1k Instagram followers, Rezaei, has also become a source of inspiration for many. After excelling in every field, Rezaei, now wants to benefit others with her wisdom and the knowledge she gained on her way to success.