Meanwhile, Devika Ghorpade, who like Mitika, is keen on dancing, won gold in the 46kg category by edging out Haryana's Tamanna. "She was down with fever during her semi-final bout 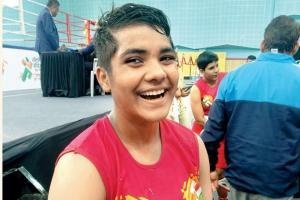 
Mitika Gunele, 17, will appear for her HSC examinations next month, but she has already topped her class for Maharashtra at the Khelo India Youth Games here yesterday. Kandivli-based Mitika clinched gold in the 66kg category by beating Haryana's Muskan.

"Boxing comes before academics for me. I am fully supported by my parents. They make more efforts than me and this medal is dedicated to them," the Nirmala Memorial Foundation College (NMFC) commerce student told mid-day yesterday.

Mitika is a trained classical dancer and took to boxing after being inspired by her elder sister Muskaan for whom boxing is no longer a priority because she injured her shoulder during a practice session.

"Despite my elder daughter sustaining a shoulder injury, I kept my second daughter in this field as they will learn to grow. Their hobbies are more important to me than their academic careers," Mitika's mother Kanchan said.

Meanwhile, Devika Ghorpade, who like Mitika, is keen on dancing, won gold in the 46kg category by edging out Haryana's Tamanna. "She was down with fever during her semi-final bout.

Thankfully, she got a little rest just before the final and played her heart out against the Haryana girl. Interestingly, last year in sub-junior national final, she was also down with fever, but returned with a gold," Devika's father Satyajeet was quoted as saying in a Khelo India press release.