Love and the game of chess

Who falls in love with a girl while watching her analyse her game at a nearby table? MP-born Niklesh Jain did so in 2017 and is now married to Angelina Franco of Colombia 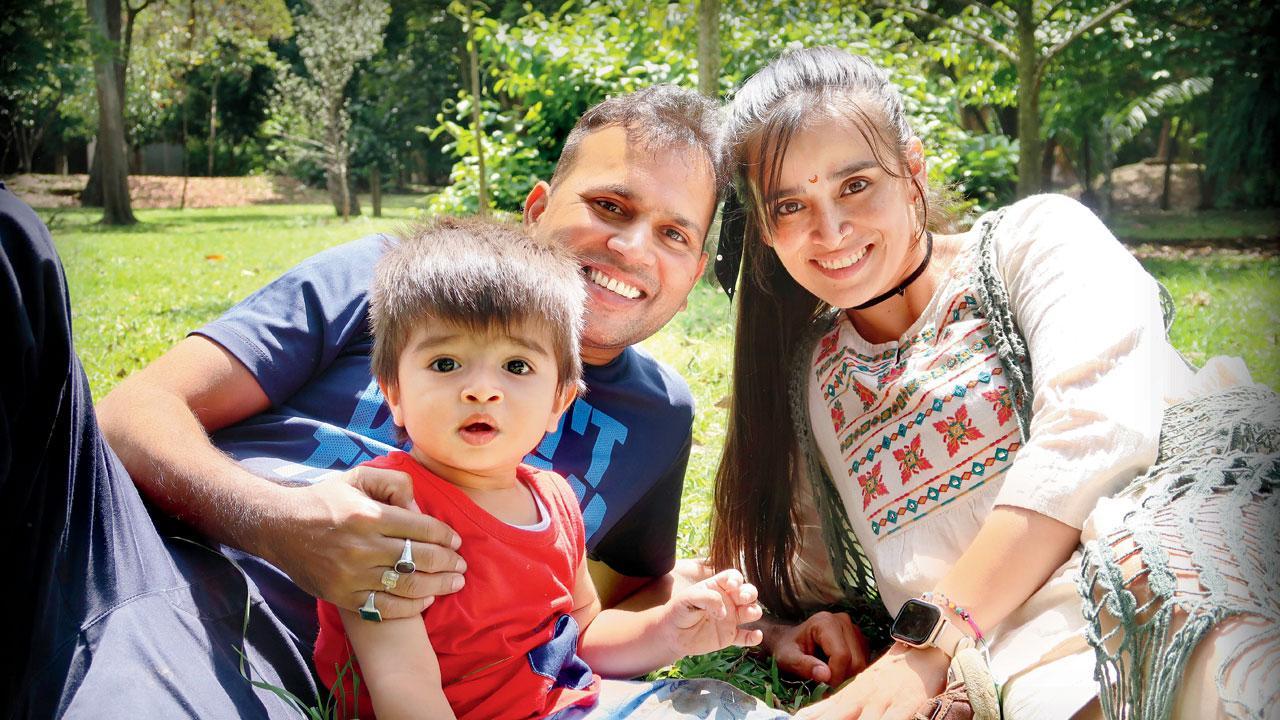 Niklesh Jain and Angelina Franco Valencia with their two-year-old son Shreshth. The husband-wife duo are reporting the Chess Olympiad for a website


Angelina Franco Valencia and Niklesh Jain may have played their matches on the chess board here on earth, but their life’s match was made in heaven. How else does one explain Niklesh, a Hindi-speaking boy from Katni, Madhya Pradesh, meeting a Spanish-speaking Angela from Madelline, Colombia, during a chess tournament in Spain in 2017 and marrying each other the following year. Indeed, their love story transcends geographical boundaries, linguistic barriers and cultural differences.

Back as a trio

Niklesh went down on one knee in the middle of the 2018 Batumi Chess Olympiad, with players from 180-plus countries as witnesses and now, four years later, both are present at the ongoing 44th Chess Olympiad in  Mamallapuram, Tamil Nadu as with their tiny tot Shreshth. Niklesh and Angela are here not as players, but to cover the Chess Olympiad for Chessbase website. In 2017, Niklesh was playing on the Catalan circuit, a series of five tournaments spread across June and July in Spain.

During the first tournament, Angela, a Women International Master, playing on the next board, finished her game and started analysing it loudly with her opponent. Irritated and distracted, Niklesh didn’t give her a piece of his mind, but instead gave her a piece of his heart! “One look at her and my anger evaporated. You could say I was totally smitten and politely asked them to lower their voices with a smile,” he reminisces.

The Catalan circuit played cupid and the young couple decided to introduce each other to their families. Niklesh comes from an orthodox Jain family and there was a furore after he made his announcement. “Initially, my family mistook Colombia for Colombo and were partially agreeable, but once they realised that it was Colombia, my rating in the family plummeted. From an obedient, lovable son, fondly hailed as Ram, I became Rambo [action hero] overnight,” chuckles Niklesh.

Niklesh then plotted and planned like a true chess player and arranged invitations for Angela on the Indian circuit of five tournaments. Angela is a 12-time Colombian champion and along with her twin sister —Woman Grandmaster Beatriz —has represented Colombia in eight chess Olympiads. Between tournaments, he arranged a week-long coaching camp by Angela for the kids of a school in Katni. “Angela came at just two days’ notice and at that point, it hit me hard that this woman travelled 16,000kms all alone without understanding English or Hindi. I was bowled over by her faith in me, her courage and readiness to take this risk and she had my whole heart forever,” says Niklesh.

Daily visits by Angela to his house to spend time with the family and it wasn’t long before they were enamoured. “Angela is a vegetarian, looks Indian, is shy and soft-spoken, warm and compassionate and these qualities made acceptance easier for my family,” says Niklesh. His family understand that chess has been an integral part of Angela’s life and would remain so.

Meanwhile, Angela says, “Niklesh is very intelligent, full of dreams and very romantic. Our love for chess is the binding factor for us. Journalists are held in high regard in my country and this made it easier for my family to accept Niklesh wholeheartedly.” Niklesh and Angela had the big fat traditional Indian wedding at Katni in December 2018.

Angela’s chess career is currently not on track because of the 2020 birth of their son, Shreshth. Ask her about her time in India and she replies, “It has been a charming journey with my life here very similar to what I lived in Colombia. But adapting to the system, language and the distance from my twin [sister] have been big challenges. Nik’s love and support has been essential for me to continue being a chess player. I continue working for my league in Colombia from India even though I missed the qualifying tournament for the Olympiad in Colombia due to the pandemic.”