Chembur girl Naishaa, 13, who played the role of kid Saina Nehwal in biopic, feels proud to emulate her idol off screen too after winning U-15 title recently 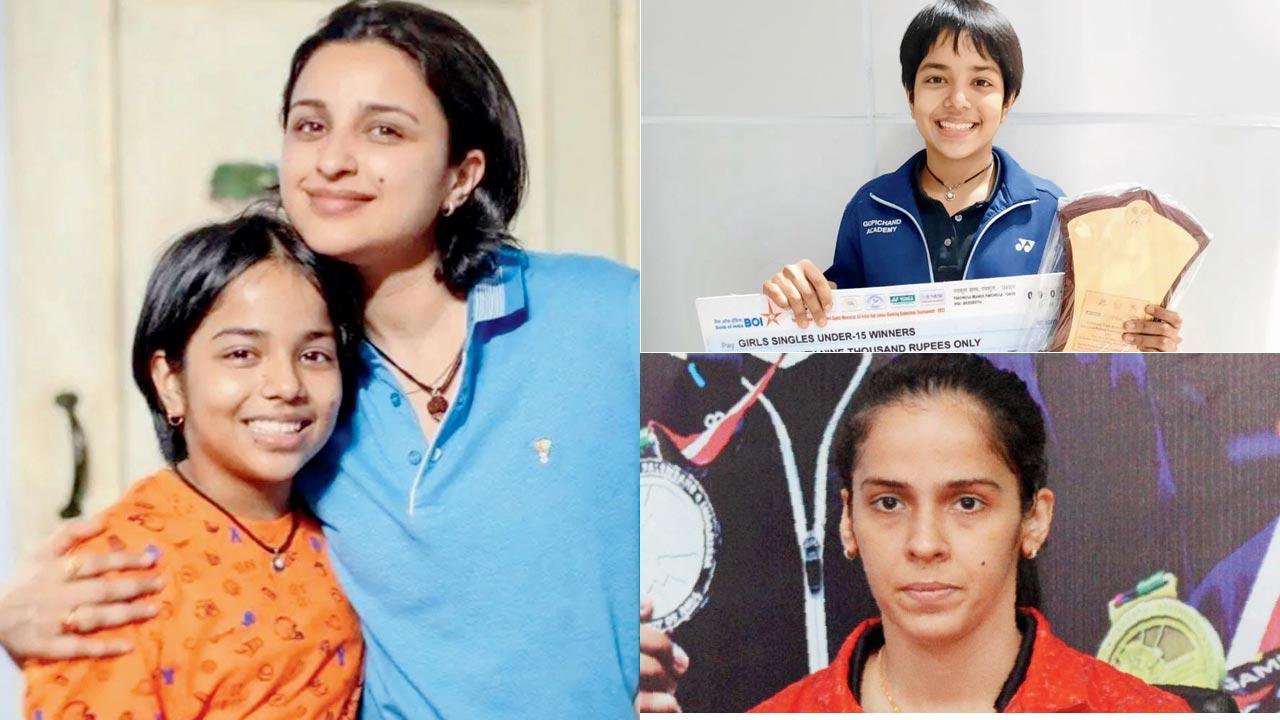 Naishaa Kaur Bhatoye with actor Parineeti Chopra; Naishaa with her trophy after winning the All India sub junior U-15 title in Haryana recently and Saina Nehwal


Naishaa Kaur Bhatoye, 13, who essayed the role of her idol, Saina Nehwal in the 2021 biographical sports film, Saina, is a champion in real life too.

The Chembur-based teenager won the U-15 girls singles title at the Ashwani Gupta Memorial All India Sub Junior Ranking Badminton Tournament in Haryana earlier this month. In the final on January 9, she defeated Anwesha Gowda of Delhi 17-21, 21-14, 21-16.

Naishaa shuttles between Mumbai and Hyderabad to pursue her badminton dream. In Mumbai, she trains at the Jitesh Padukone Shuttlers’ Academy at the North Indian Association, Sion, while in Hyderabad, she trains at the Pullela Gopichand Badminton Academy (PGBA).

India’s chief national coach Gopichand is full of praise for Naishaa. “She is a good talent and a very gritty athlete, a lot like Saina [Nehwal],” Gopichand told mid-day.

Naisha is grateful to her school, St Gregorios High School, Chembur, for helping her continue training in a different city. “I started playing under Jitesh sir in 2015 when I was seven and began attending Gopi sir’s academy two years ago. I’m thankful to my school for permitting me to attend classes online long before the COVID-19 pandemic began. I come to Mumbai only for my exams,” said Naishaa, a Class VIII student, who lives in the city with her mother, Sapna, and elder sister, Jaspreet. Her father, Jagir Singh, has taken a job transfer to Hyderabad to ensure she can train under Gopichand.

Naishaa recalled how she landed the role of kid Saina in the film. “Initially, when actor Shraddha Kapoor [Parineeti Chopra eventually played the lead role after Kapoor opted out of the film] was doing the film, she saw me at the North Indian Association and recommended my name to the director. I was just nine when I shot for the movie. I shot for around one-and-a-half month for the 20-30 minute role. It was a dream come true to play the role of my idol. I took up badminton because of her,” explained Naishaa.

Coach Padukone, a former national shuttler, is confident Naishaa will achieve great heights. “She is very different from other wards at my academy. Her hard work and perseverance make her special. She is an attacking player. She will be the next big thing in Indian badminton,” said Padukone.