In an absorbing clash at the National Bank Open, the Pole adjusted to the 27-year-old's quick play on serve, while he delivered decisive blows from his own strings to advance after one hour and 46 minutes and improve to 31-13 on the season 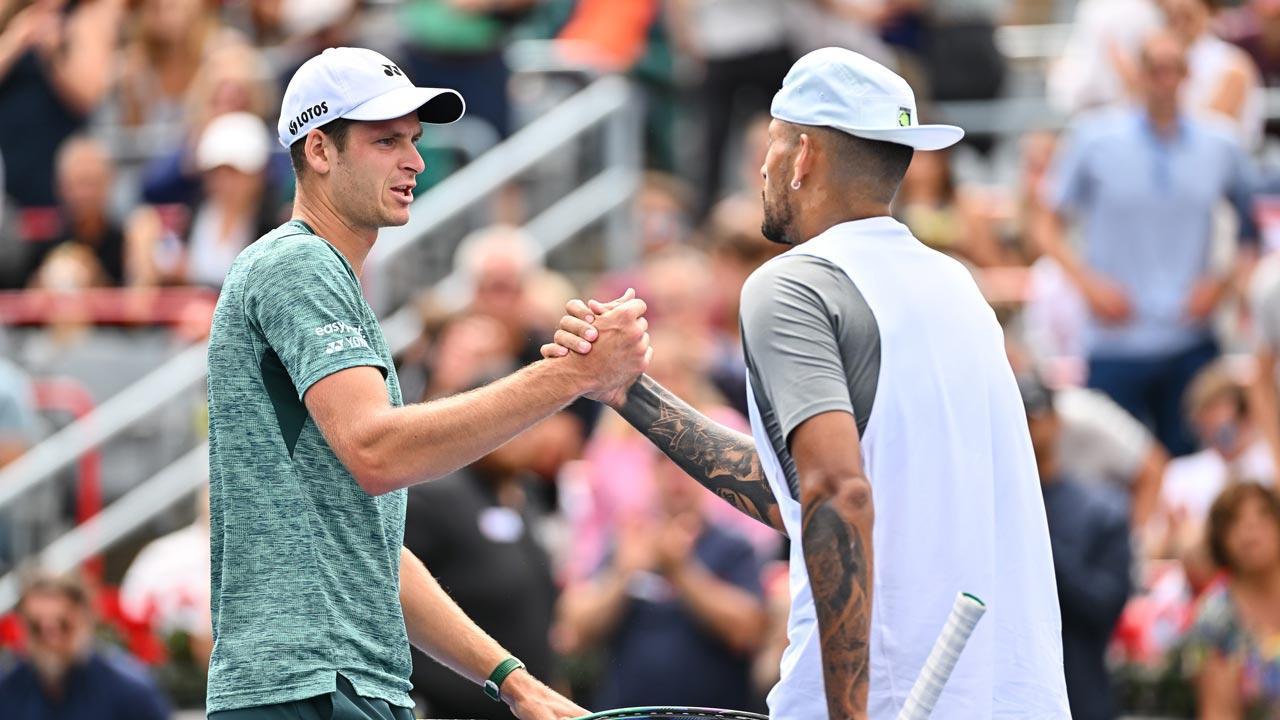 Hubert Hurkacz of Poland shakes hands after defeating Nick Kyrgios of Australia in 3 sets 7-6, 6-7, 6-1 during Day 7 of the National Bank Open at Stade IGA on August 12, 2022 in Montreal, Canada. Pic/AFP


Hubert Hurkacz survived an attacking bombardment from Nick Kyrgios to reach his fourth ATP Masters 1000 semifinal on Friday, in overcoming the Australian 7-6(4), 6-7(5), 6-1 on Court Central.

In an absorbing clash at the National Bank Open, the Pole adjusted to the 27-year-old's quick play on serve, while he delivered decisive blows from his own strings to advance after one hour and 46 minutes and improve to 31-13 on the season.

Last week's Washington champion Kyrgios entered the match in red-hot form, having won 15 of his past 16 matches, with his only defeat coming against Novak Djokovic in the Wimbledon final.

However, after a fast-paced and intense first two sets, the Australian was unable to match the Pole's energy in the third set, with eighth seed Hurkacz grinding down a tiring Kyrgios - who struggled physically - to move to 11-6 in deciding sets this year.

Hurkacz now leads Kyrgios 2-0 in their ATP Head to Head series and has improved his record to 28-1 after winning the first set this year. The 25-year-old, who triumphed in Miami in 2021, will continue the quest for his second ATP Masters 1000 crown against fourth seed Casper Ruud or home favourite Felix Auger-Aliassime.

In a lively match, both players looked strong on serve for large periods. Kyrgios averaged 10 seconds between points during the first two sets as he frequently interrupted the crowd's roars with his fast-paced style, while Hurkacz rushed to ready himself for the return.

The Pole clinched a tight first set in the tie-break with a backhand winner, before Kyrgios battled back in the second set. With the help of a net cord at 3/2 in the second-set tie-break, the World No. 27 gained a crucial mini-break, before he levelled the match with his seventh ace of the set.

A third-set push was a step too far for Kyrgios, though, with the Australian seemingly tiring on the hard courts in Montreal. Hurkacz quickly broke at the start of the decider, before he remained solid on serve to triumph.

Earlier this season, Hurkacz clinched his fourth tour-level title in Halle and is currently 10th in the Pepperstone ATP Race To Turin as he looks to make his second appearance at the Nitto ATP Finals.

Next Story : Independence Day special: 5 stars who were the changemakers in Indian sports