What makes a 50-year-old bar in Matunga make 80 per cent of its profits from food? The answer lies in a bowl of sweet corn chicken soup and owner Umesh Shetty's commitment to quality 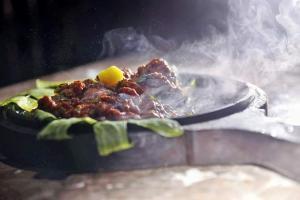 
Chicken lollypop is the least ordered dish at the restaurant," says Umesh Shetty, 58, as he slides into a seat opposite us at Durga Restaurant and Bar in Matunga. The establishment that celebrated its 50th anniversary last month is called a bar, but is famous for its food menu. "Idhar se kha ke janeka [leave after eating]," he threatens in accented Hindi when we ask him to go easy on the food order.

The steward is told to get a sweet corn soup, chicken in red sauce, chicken ghee roast, paneer in green sauce and a paneer bullet. The last dish will be finished on the table in a flambé. 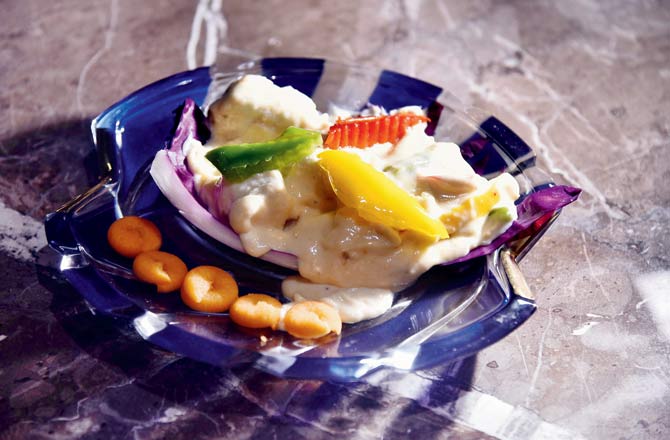 The Shetty-style quarter bar opposite Central Matunga station hosts the customary fish tank, kitchsy backdrop, stainless steel furniture and a green carpet. Its customers include a mix of students from Ruia, Wellingkar and Podar college, office goers and Gujarati and South Indian residents from around. While it follows a decanter serving set up, food makes up for 80 per cent of orders.

Before the soup arrives, we confess that it's not a favourite. But this bowl comes with a deep yellow broth, with chicken shreds and egg strips. The creamy strips and freshly boiled and blitzed American corn gives it a velvety sweetness. Shetty smiles, and points to a dark line on his forehead, a trademark of cooks who've worked long hours in a hot kitchen. "This is my degree," he says, taking the conversation back to when this place was Durga Lunch Home.

"At seven, my father and mentor, Narayan Shetty took a boat from Kapu, our village in Mangalore. He got off at Churchgate, penniless. He worked his way up, first as waiter at udipis, chai and usal stalls. This was around 1939," says Shetty, who grew up in Masjid Bunder and later Matunga. "When I was five, my father took over a restaurant to run it. He was a great cook and taught me the ropes of running the space. It was my mother, Nalini, who, however, taught the cooking. I began coming to the hotel every day once I turned 15 and, in fact, would be the one to open the shutters." His mother's Mangalorean fish curry, kori roti, chicken sukka, bangda masala and fish fry were favourites. "My wife, Kalpana, picked up some of the recipes. Amma taught me how to marinate fish; it should be done for an hour."

In its first avatar, the lunch home was frequented by traders looking for a Mangalorean meal, to which later, the cosmopolitan lunch staples chana masala, aloo matar and dal dry were added. To date, taxi drivers say they miss the thali that they served with two sabzis, roti, rice and dal. By the end of 1980s, Shetty convinced his father to change the format. "We began seeing locals, office goers and students from the five colleges around," says Shetty, who took a year-long course at IHM, Mahim, but it was time spent in the kitchen that he calls trial by fire.

Armed with a business degree, Anish Shetty, 24, has recently joined father Umesh Shetty, and hopes to introduce a mid-level eatery that caters to a younger audience. Pics/Pradeep Dhivar

For the last eight months, his son Anish has been joining him at work. While a mid-level restaurant is being planned, the 24-year-old is the first member of the family to get a Masters degree in business. Armed with work experience as company secretary and law executive at Morgan Stanley and Price Water Coopers, he is brimming with ideas that he is trying to convince his father to embrace. "My friends from Podar College would drag me here," he quips, remembering how he hardly saw his father at home since he was clocking in 14-hour work days. "It is impossible to take a holiday, and festive days are most busy. But, I want to take this institution to the next level; perhaps create a chain or a new version that is mid-level and caters to the younger audience," Anish thinks aloud.

Shetty's latest experiment has been newly introduced to the menu, a red sauce he worked on for over a year. "It is a cross between a continental and Indian sauce, which has curry paste, paneer, ginger-garlic and some secret ingredients," he smiles. We get to taste it in the paneer in red sauce. Flavourful, but not spicy, it reminds us of a cross between a continental tomato sauce and Indian curry.

All the dishes come with interesting garnish of carrot and radish. A Japanese cutter he picked up at a food exhibition makes curls and discs of vegetables and has come handy, Shetty says. The maverick gives attention to detail and is hungry for feedback. "We learn from our customers," he says.

For a restaurant and bar, their Jain orders are very popular too. "Sometimes when a regular customer places an order without mentioning dietary preference, we know they want Jain food since their data is fed into our system. I know of tour operators who vacuum-pack our paneer handi and take along on trips. It lasts for up to three months. The other all-time hit is the paneer biryani. "On December 31, we sold 130 plates!" says Anish, who worked into the night, ditching his friend's on new year's eve. Shetty throws him a knowing look when he calls it a 24x7 job. "Diabetes, blood pressure and heart attack come with it. We have erratic eating hours, and decreased sleep."

At Durga, the kitchen follows protocols, including no tinned item, no palm oil, no added colour. The 'Schezwan' sauce is made inhouse and all produce is bought from Plaza market. The fish comes from Sion, and Mahim's Satellite market.

Half a century in the neighbourhood means Shetty knows his customers like the back of his hand. In '70s hero-style, he says, "Idhar ka pathar pathar ko main pehchanta hoon (I recognise every brick in this restaurant and around.) It is built and run on one principle my father passed on, no compromise."

Next Story : For a sorghum kick