Despite Mumbai witnessing a 20 per cent jump in POCSO cases since 2020, child-friendly courtrooms still elude survivors, who have to walk through lofty staircases and long corridors to face their worst fears. Will a colourful room quell their anxiety? 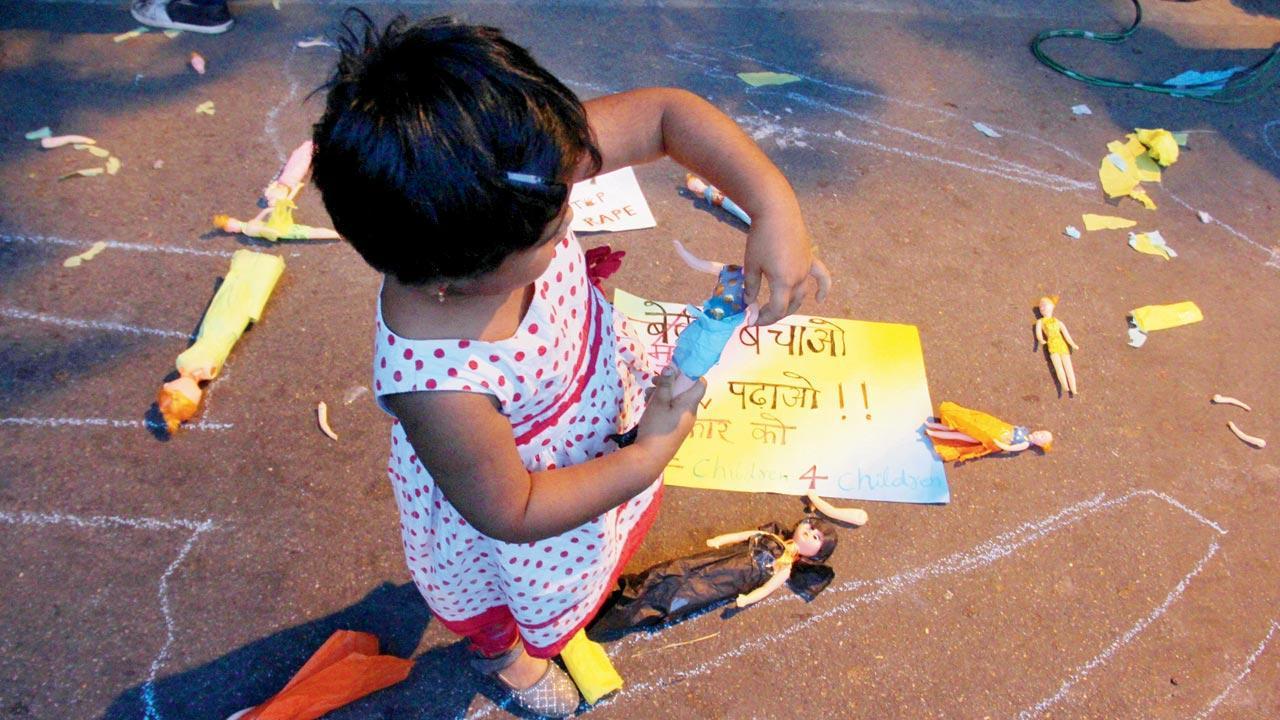 Mumbai saw 1,066 cases registered under the Protection of Children from Sexual Offences Act 2012 (POCSO) last year. Advocate and former bureaucrat Abha Singh says that the city has a higher number of cases because of its “large migrant and working population”. “Children are often left alone at home or are at the mercy of neighbours.” Pic/Getty Images


While Mumbai is safe for women, the same cannot be said for children. According to statistics provided by the Mumbai Police last year, the city saw 1,066 cases registered under the Protection of Children from Sexual Offences Act 2012 (POCSO). The cases, which included rape, molestation, violence and eve-teasing, saw a 20 per cent jump compared to 2020. A March 2022 report in The Wire states that Maharashtra is the second state with high pendency of POCSO-related cases after Uttar Pradesh with 30,677 cases. A possible reason for Mumbai seeing a higher number of POCSO cases, according to advocate and former bureaucrat Abha Singh is the “large migrant and working population”. “Because of this, children are often left alone in the house or at the mercy of neighbours.” Moreover, the number of NGOs working for children are fewer and since they are not a vote bank, many leaders also do not raise their voice, she says.

To make it worse, a child-friendly POCSO court continues to elude the city. Child-friendly courts are separate courtrooms painted and decorated with toys, books and games to create an informal environment for child survivors to comfortably and safely give evidence. 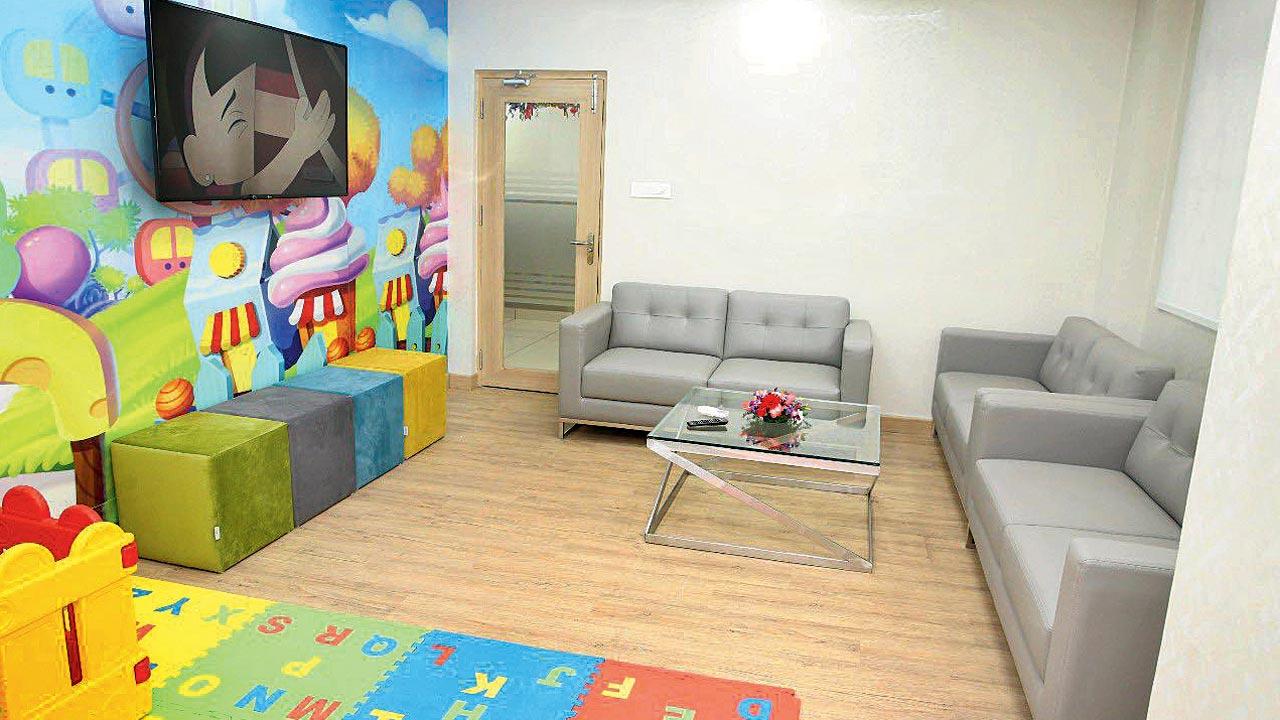 Last week, Kerala high court judge K Vinod Chandran inaugurated the state’s first child-friendly POCSO court, following in the footsteps of other states such as New Delhi, Goa, Telangana and West Bengal. Mumbai has designated special POCSO courts at the Dindoshi and Fort sessions courts, but lacks a child-friendly space. “There needs to be a safe, welcoming and comfortable waiting zone for children and their trusted guardians, with separate toilets, a designated eating area, and a space for open play,”  child rights activist, writer and actor Nandana Dev Sen tells mid-day. “Games, picture books, and toys go a long way in taking away a child’s anxiety, as does engaging them with fun activities such as drawing, colouring, building blocks or solving puzzles.” Sen also adds that a separate and truly child-friendly POCSO court would certainly make a difference but there also needs to be a shift in attitude and policy.

Singh believes that “a comfortable environment” helps the child survivor or witness narrate and identify the accused better. “At that tender age, they are psychologically scarred and if they have a toy in their hand or if they are eating a candy, it makes it easier for them. Many a times, they forget the details and that is what the accused takes advantage of. The more comfortable you make them, the less the overwhelmed they’ll feel,” she says. 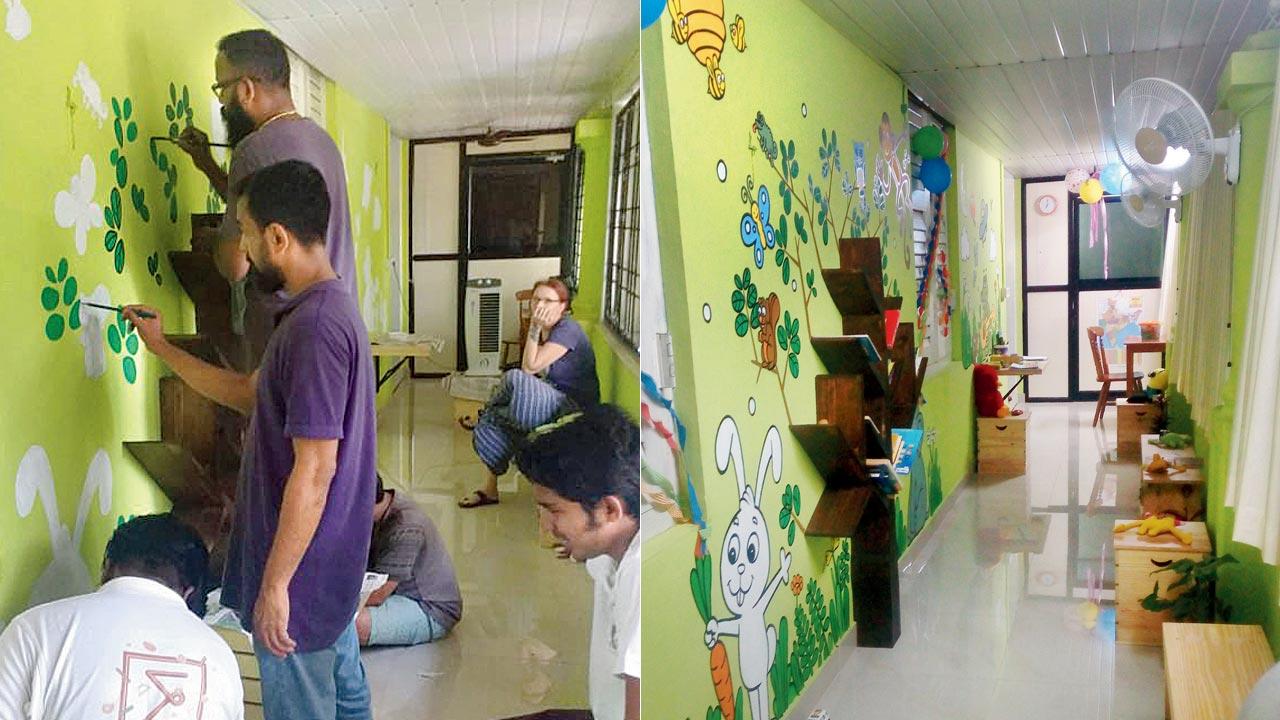 In 2018, Dil Se Foundation along with Eunoians volunteered to paint the waiting area at the sessions court in Kochi to make it more child-friendly

Prabha Pirappa Kamble is part of Navnirmal Vikas Kendra, a Mumbai-based organisation that deals with child rights and protection. As part of her job, she accompanies child survivors to the POCSO court. “The staff at most POCSO courts are very polite,” she says.

The basic protocols at a POCSO court is that they should allow a family member, guardian, friend, relative or a support person with whom the child can be present in the court and is comfortable with. The court should also permit frequent breaks if necessary to the child. When asking questions to the minor, the prosecutor cannot put forth these questions directly to the child, but via a judge. Aggressive questioning and character assassination of the cannot be permitted. The court should ensure that the child is not called frequently to testify. The identity of the victim should also not be disclosed and the victim should not come in contact with the accused. During an on-camera deposition, only those involved in the case should be present in court, while others are expected to vacate the premises. “It is the responsibility of the judge that a child-friendly atmosphere is maintained,” says Mumbai-based Aditya Pratap, advocate and founder, Aditya Pratap Law Offices. Pratap, who has worked on POCSO cases and has been a lawyer for nine years, says that infrastructure requirements for POCSO courts are not extravagant in Mumbai. The problem right now, he says, is that space has been made inside colonial-era buildings for POCSO courtrooms. “Courts should be augmented with new buildings, and new infrastructure like a designated wing where a child can be taken and looked after well.” 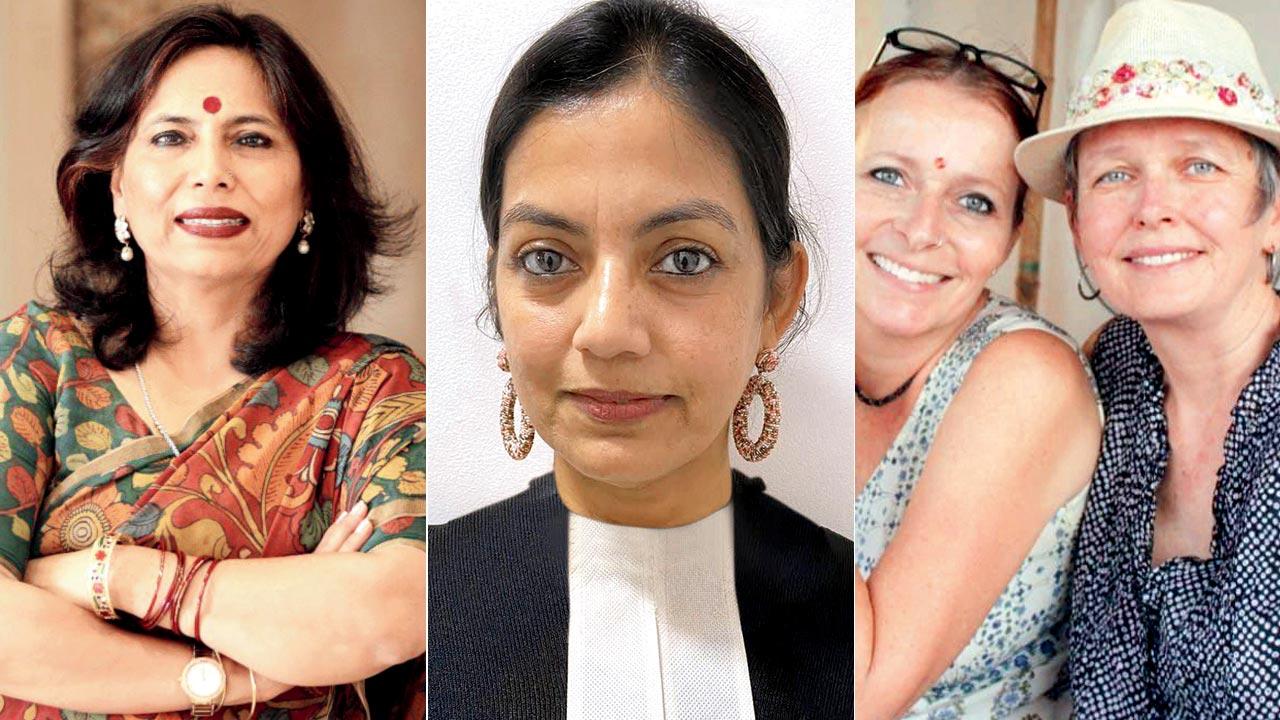 The layout and decor should also be made keeping in mind the age group of the minors. “Children are not one homogenous group,” says Priyangee Guha, lawyer and policy analyst, who works with victims of violence. “Both infants and those below 18, will be using that room. While deciding the decor and layout, we have to keep in mind that the criteria for a two-year-old is not the same as that of a seven or 13-year-old.  Children of various (dis)abilities will be using that room. The team should have a child psychologist and social worker trained to work with children and organisations that work with disabled communities for inputs,” she adds.

Cristelle Hart Singh, co-founder   along with Marina Racine, of Dil Se, a Kochi-based non-profit organisation that addresses issues of child sexual abuse believes that child-friendly courts should be a pre-requisite, because it is the least that can be offered to children. In 2018, the organisation along with Eunoians, a group of artists creating multi-media creations, decided to refurbish the waiting area at the sessions court in Kochi. “My husband is into designing furniture—we put some wooden furniture and also painted bright colourful cartoons on the walls,” says Cristelle, adding, “We wanted to make [the waiting room] the most comfortable space possible for them.”  She suggests that NGOs in Mumbai take up a similar initiative too. Advocate Persis Sidhva, director at RATI Foundation, which work towards creating safe spaces for children against sexual violence, however, doesn’t believe that “painting walls” of a courtroom makes the experience for a child survivor any better. “It’s like taking the easy way out.” 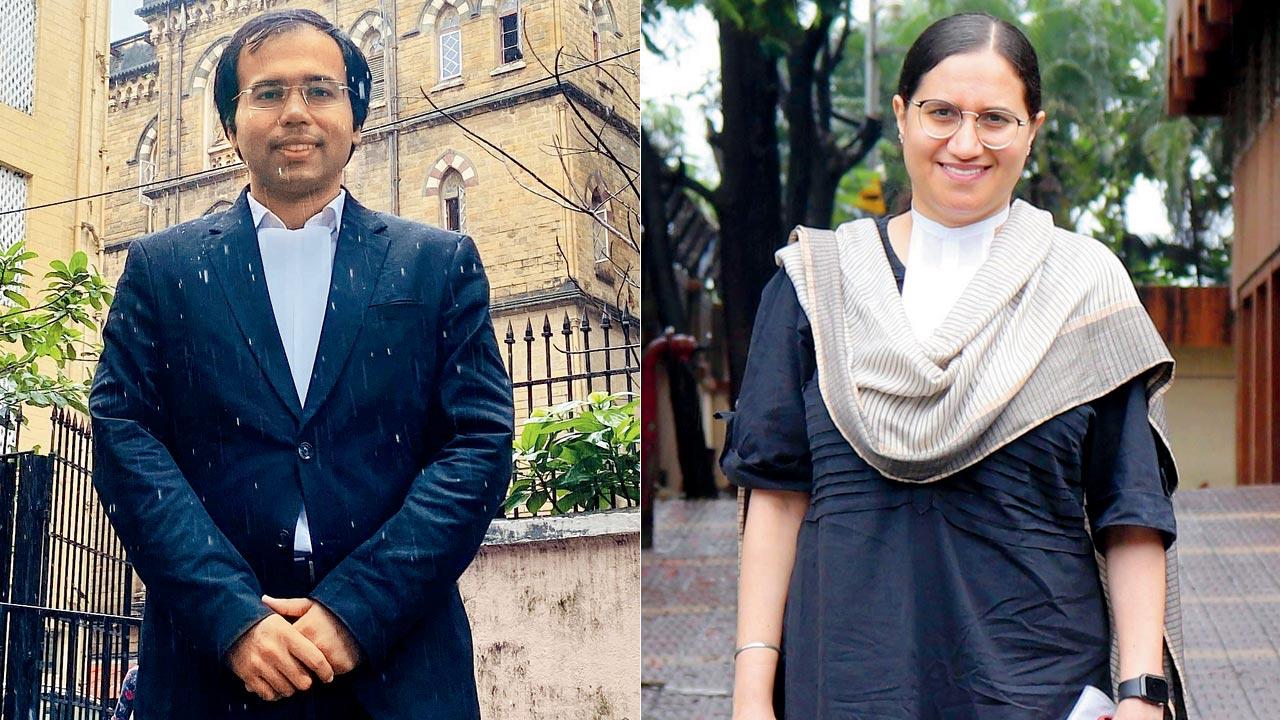 Advocate Aditya Pratap outside the sessions court in Fort where one of the POCSO court is on the third floor. Pic/Shadab Khan; (right) Persis Sadhvi, advocate and director of RATI Foundation, outside the Dindoshi sessions court. Pic/Anurag Ahire

Most POCSO special court rooms in the sessions court are on the third floor. At the Dindoshi sessions court, there are two special POCSO courts, whereas the sessions court at Fort has around six to seven special designated POCSO courtrooms. This writer visited the Fort sessions court. After entering the old building, we walked through a compound, which led to the new building. From here, we had to climb walk up lofty staircases and down, corridors to reach the POCSO courtroom. “At the end of the day, when the child comes to court, s/he has to walk up the common staircase, used by accused and lawyers. By the time they reach these special courtrooms, the whole process of intimidation has already taken place,” she explains. 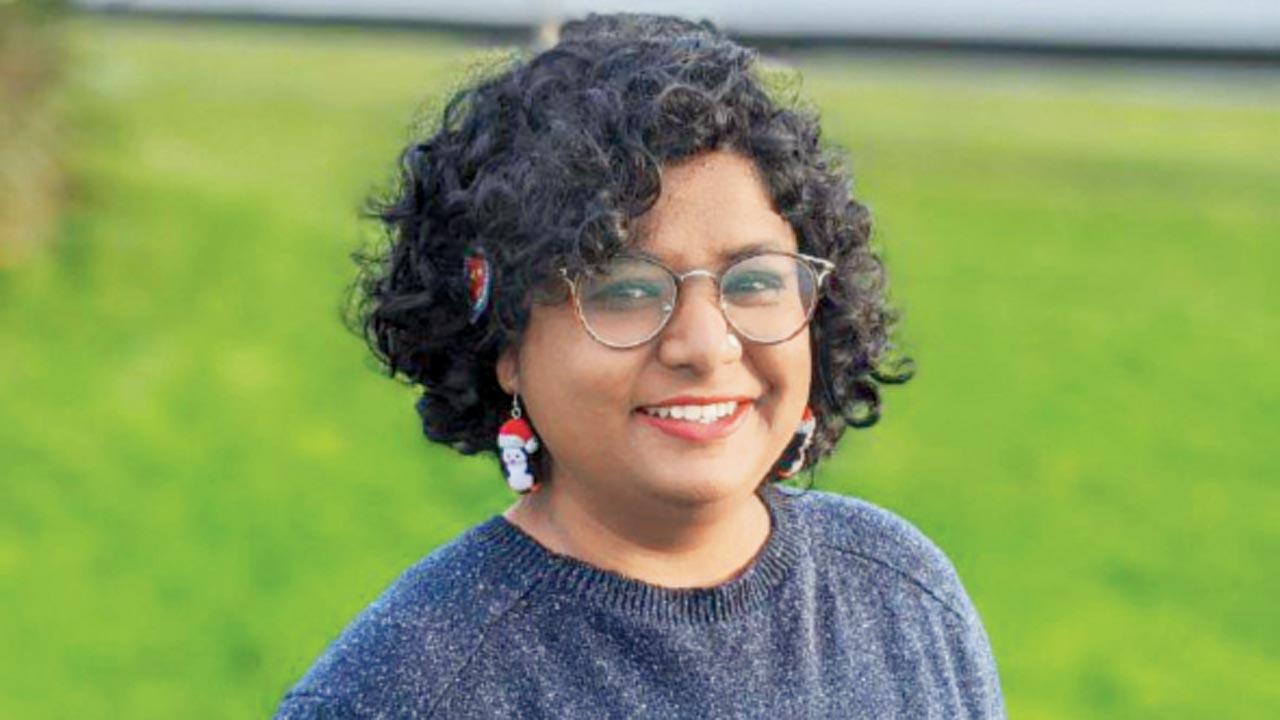 Audrey Dmello, director of Majlis, an organisation working towards providing legal and social support to survivors of sexual and domestic violence believes that support should be provided throughout the trial. A refurbished courtroom will not serve any purpose, she says. Through Rahat, their legal centre, they provide support to young survivors. “When children visit a court, they know that they are going to depose, and will have to narrate the entire incident again, so irrespective of how the infrastructure is, it still is a very traumatising experience,” says Mallika Verma, programme director of Rahat. Basic things should also be taken into consideration, such as the fact that maybe the child is not comfortable with sharing details in front of a male judge or a male prosecutor. Sidhva also pointed out that small efforts such as having someone receive the child when they arrive at the court, or a friendly support person, can go a long way in putting the child is at ease. “Sometimes the child is standing in the court and everyone is told to leave the court... this makes the child feel like a victim. The intention is good, but how do you do that in a way which makes this process actually child-friendly is important,” says the 34-year-old lawyer, who has been practising for over a decade. Dmello and Verma share how the judge and lawyers often need to be reminded that the survivors are kids. “They need to be sensitised. Providing holistic social support to the victim, hand-holding them not only through the legal process, but also through life, like helping them return to school, would help them gain confidence. This will in turn help in the court deposition,” says Dmello.

Next Story : ‘I don’t think struggle is a bad word’