Barking up the right tree

An architect’s secret childhood getaway manifests into a stunning canopy walkway for Mumbai as BMC gives nod for a loopy bridge metres off the Malabar Hill forest floor. 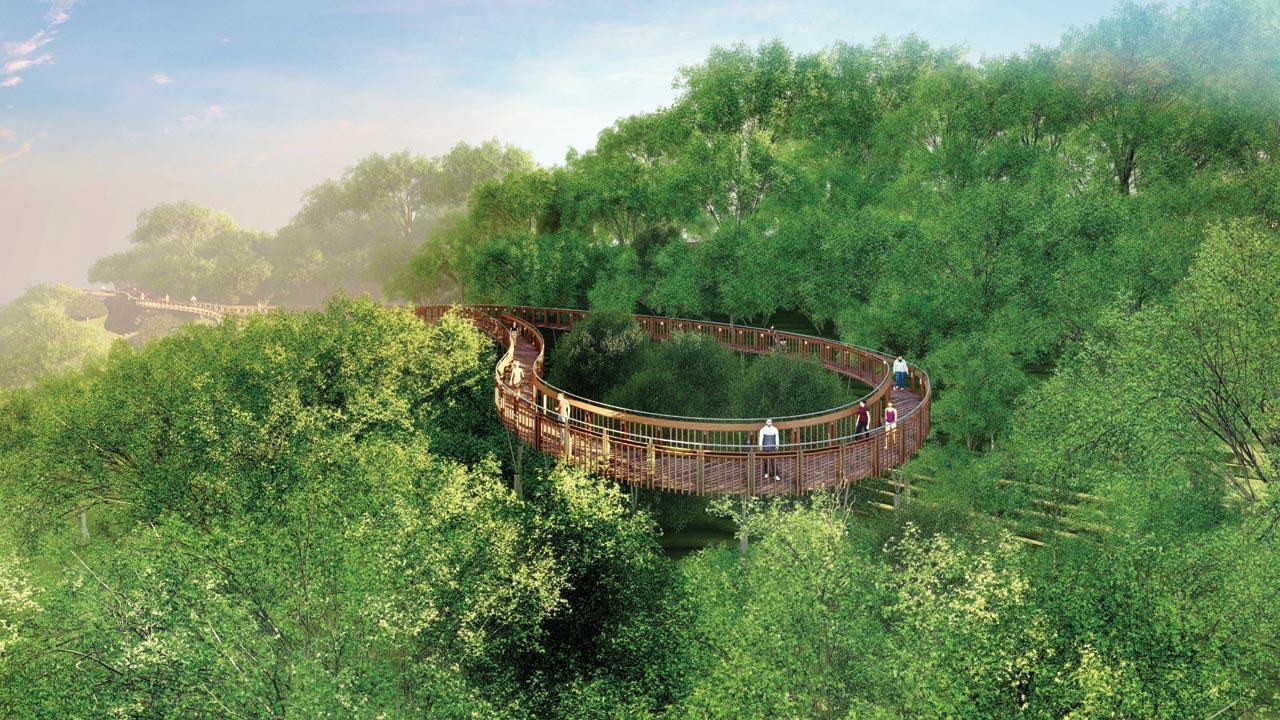 The 705-m long elevated wooden walkway, designed by architect Rahul Kadri and his team, is being constructed inside the forest at Malabar Hill. The trail will offer sweeping views of the forest and the Arabian sea. Pics and imaging courtesy/IMK Architects


In the 1970s, when Mumbai was still Bombay, and the idea of a vertical city was yet to catch everyone’s imagination, architect Rahul Kadri, then a young boy, fancied a life in the forests of Malabar Hill. Trudging through the kacha pathways inside the green strip, he remembers being blown away by its beauty. The sounds of chirping birds and other elusive creatures, only added to its allure. “Over the years, it became neglected, and started being used by people to brew illicit liquor, earning a shady reputation. At some point, authorities posted guards out there, and later built a gate, in the hope that the illegal activities would stop,” says Kadri, about the patch of green that’s been locked up, and out of bounds for visitors for over a decade.

During the pandemic-induced lockdown last year, while out on a regular stroll on Siri Road, Kadri managed to sneak inside. The forest was in ruins, but with some intervention, Kadri felt that the trail could be opened up to the public again. “Parts of it were unkempt, of course. There was a little landslide that had occurred, too. But, it was still lovely. I just hoped that it was attended to, and that more people could experience what I was seeing.”

The raised wooden walkway, which will offer sweeping views of the forest and the Arabian sea, is being constructed right above the existing on-ground trail at the forest in Malabar Hill. Pics and imaging courtesyY/IMK Architects

That marked the genesis of what is now going to be a first-of-its-kind elevated forest trail in the country.

Spearheaded by architecture and urban design firm IMK Architects in association with the Brihanmumbai Municipal Corporation (BMC), the 705-metre-long elevated treetop walkway at the Malabar Hill forest will allow people to walk through the woods, while enjoying sweeping views of the sea. The project is expected to cost Rs 10 crore, and is currently awaiting a green signal from the state authorities.

The trail will also be interspersed with viewing decks, benches and a glass bottom look-out zone

Kadri says that after his visit to the stretch, he approached the Nepean Sea Road Citizens’ Forum (NSRCF), of which he is a founding member. “They were all enthused by the idea, and encouraged me to take it forward.”

He was, however, fully aware of the challenges that lay before him. “In the past, I have made a lot of plans, and nothing came of them. This time, somehow, everyone seemed excited,” says Kadri, who is partner and principal architect at IMK Architects, founded by his famous architect father, IM Kadri.

A 3D plan of the amenities at the walkway

Things started moving when Mukul Mehra, secretary of the NSCRF, secured an appointment with Aaditya Thackeray, Minister of Tourism and Environment, who later visited the site. “Nobody could believe that a 12.5-acre forest existed in the middle of the city. It has somehow survived from a couple of centuries ago, and is possibly the only strip that remains alongside the one at the Tower of Silence [near Malabar Hill]. It’s a quirk of luck, I suppose,” Kadri feels.

Initially planned as a project driven by citizens, Kadri was backed by Sangita Jindal, chairperson, JSW Foundation, who funded the preliminary work on the drawings and designs, which were then presented to the state authorities, for a go-ahead.