If your pet is behaving differently in the pandemic, you may not be alone. Experts say, it’s a mirror effect, with animals absorbing and exhibiting what pet parents are experiencing 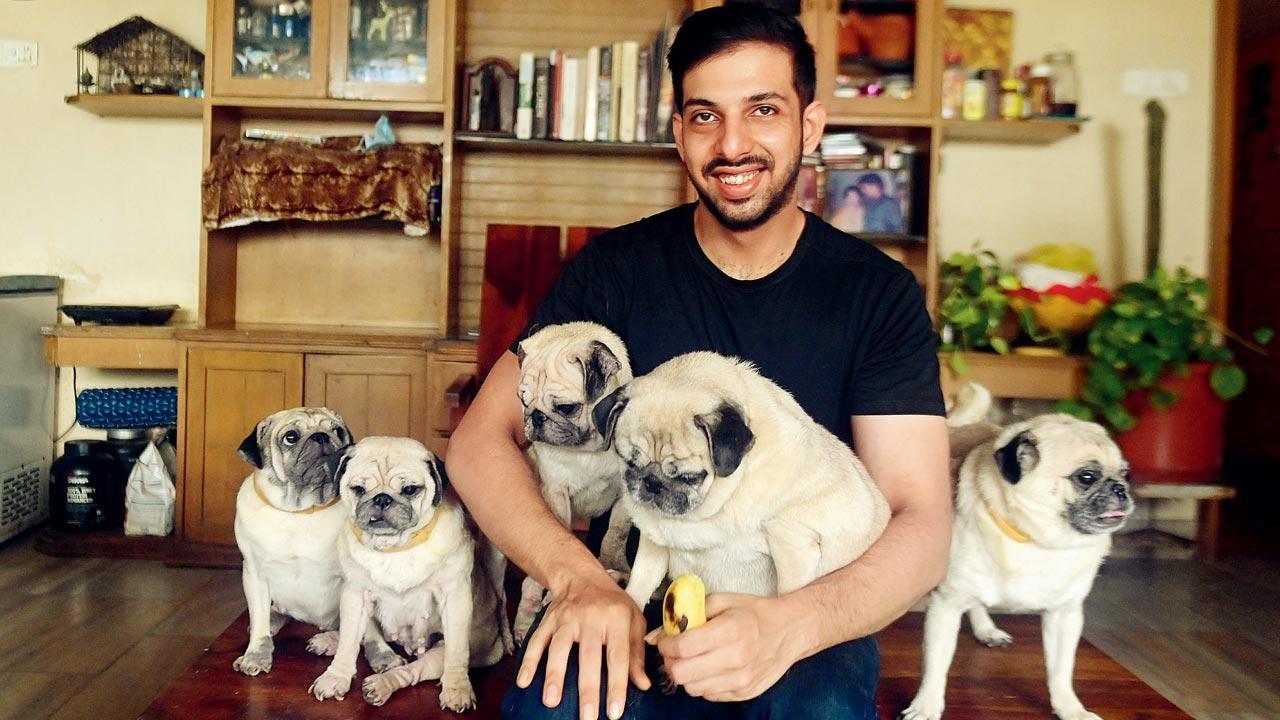 Rushail Navani, co-owner of Cuffe Parade delivery kitchen Masalesque, with his five pugs. He says the pooches had piled on kilos and were restless during the first lockdown in the absence of exercise. Pics/Sameer Markande, Bipin Kokate


At fitness and wellness coach Tabitha Thomas’ Mulund home, visitors are advised to keep away from nine-year-old Tyra, the pet dog. Their felines, Ollie, 2, and 10-month-old Suki, are gregarious and always in the mood to play. “Dogs are known to be innately sociable, but Tyra is not one of them.  Because we did not have guests all through the lockdowns, she has become all the more wary of new  faces,” says Tabitha, founder and head coach of Zinglee Fit. Her cats, on the other hand, have sorely missed human company. Before the outbreak, Thomas and her husband Sanket would routinely host friends for board game nights. “They [cats] miss having people over so much that they get excited even if a plumber arrives, and rub themselves all over him,” she laughs.

Humans aren’t the only ones who have had to adapt and adjust to new ways of life during the Coronavirus pandemic. Their companion animals, too, have undergone a behavioural transition, observe pet parents. For some, it has meant a change in the way they interact with their families or with others outside the household. Researchers from the Universities of York and Lincoln in the UK surveyed 5,323 people with companion animals, including horses, reptiles, birds, and fish, cats and dogs. The results indicated that over 65 per cent of participants had noticed a change in the behaviour of their pets during the lockdown in 2020. The research, which  was published in the International Journal of Environmental Research and Public Health, revealed that about 10 per cent of dog, cat, and horse owners noted their companion animals were unsettled by the changes, but up to 30 per cent found they seemed more relaxed and up to 15 per cent observed that their pets were more energetic and playful. About a third of owners, mostly the pet parents of dogs and cats, noticed that their animal companions followed them around more than usual.
According to Thomas, there was a noticeable change in Ollie during the lockdown. “Pre-pandemic, he would not bother greeting me when I’d get home. In the lockdown, because I was home all day, he grew attached and turned into a lap cat, at least with me. These days, when I get home after my workout sessions, his excitement [to see me] is two-fold.”

Fitness coach Tabitha Thomas and husband Sanket, and their dog Tyra, and felines, Ollie and Suki. She says her cats miss human company as they have been used to having guests over before the pandemic put an end to it

For pooch owners, changes in exercise routines during the lockdown became a major concern. Rushail Navani, lawyer and co-owner of Cuffe Parade’s delivery kitchen Masalaesque, remembers the sudden aggression in the behaviour of his five pugs. “All dogs need an outlet for energy, which is usually walking, running, or exercising.” His dogs piled on kilos,  became restless and belligerent in the absence of daily walks, which would previously happen three times a day. This year, with the resumption of walks, the pooches are in a much better place. “They are so habituated to seeing my parents and myself around now that if I even pick up my gym bag, they start barking. They don’t want us to leave.”

Atil Pavesha with his horse, Theia, at Amateur Riders’ Club, Mahalaxmi. During last year’s lockdown, Pavesha could not visit Theia for four months. When he eventually met her, she looked refreshed, energetic, he says. “The time away from humans had helped”

Priyanka Hosangadi is a telepathic inter-species communicator, who conducts workshops to donate for animal welfare. According to her, pet owners have experienced a change in perspective because they have been spending more time with their pets at home. “Animal companions are very sensitive to our emotions and mood changes. Often, they start mirroring our behaviour, including our stress levels.” In the pandemic, she has come across several such instances. It’s not uncommon for a more aggressive person to unwittingly inspire the pet to react similarly while someone battling depression may make their pet morose. The objective of mirroring, she explains, is to make the human aware that a certain aspect of their behaviour is not desirable.  “Sometimes, owners are concerned about separation anxiety their pet may experience when they resume work at the office. But a lot of times, when you interact with the animal, it turns out that it’s the owner who is experiencing anxiety and not the pet. This is more in the case of those who adopted pets during the lockdown and haven’t been away [from them].”

Larger animals like horses also mirror our energy, believes Atil Pavesha, equestrian athlete and founder of True Fit Gourmet, a culinary kitchen in Santa Cruz. He bought Theia, an eight-year-old horse at Amateur Riders’ Club, Mahalaxmi, in 2016. Last year, for four straight months, Pavesha could not visit Theia. “It was quite a revelation when I eventually did meet her. Theia looked refreshed, and  ready to take on the world; a feeling akin to humans post a vacation. It was as if the time away from humans helped her rejuvenate. Other riders felt the same.” Pavesha suggests that those who wish to be around a horse should be centred and in control of their feelings. “Communication with your horse is important, because they are very perceptive. You have to let go of your stress and live in the moment when you are around them.”