Is there a correlation between the flu jab and better immunity against COVID-19? Two paediatricians, studying promising statistics in the Bohra Muslim community, say why an annual flu vaccine could offer larger protection 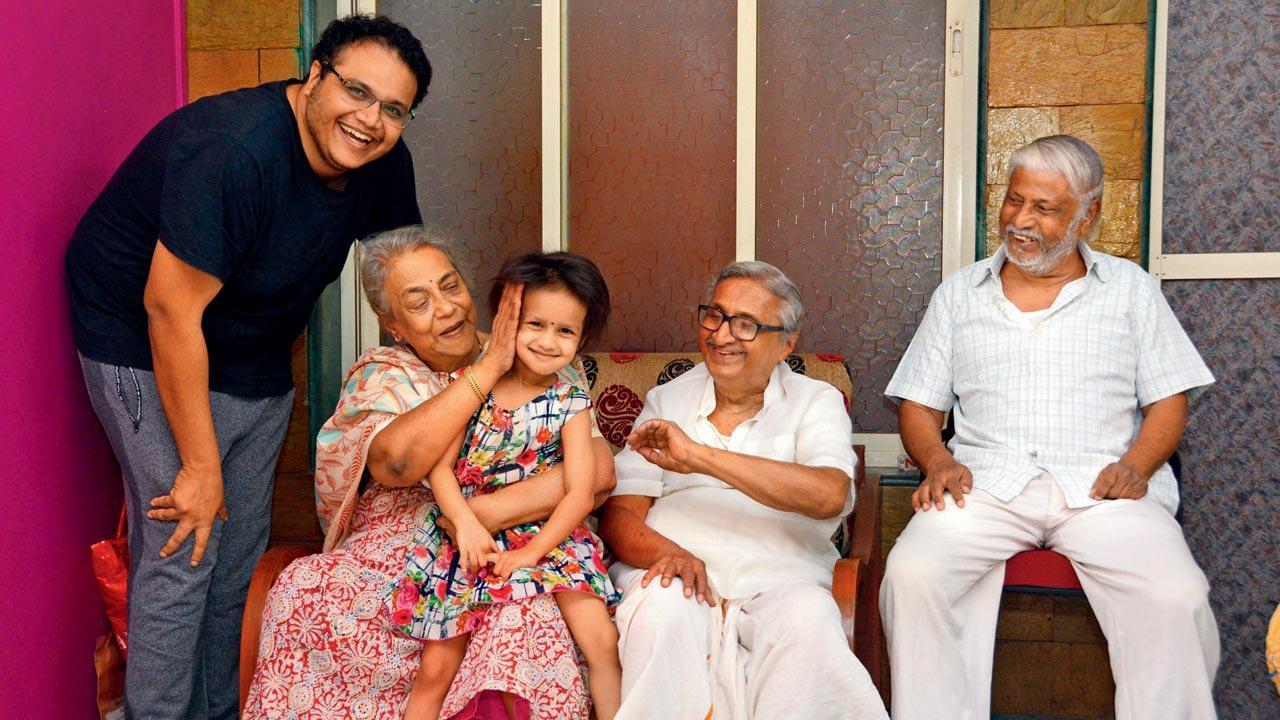 
July 1, 2020. The COVID-19 pandemic had already set in. Maharashtra reported a new single-day high of a staggering 5,537 fresh cases, as the state’s total case tally breached the 1.8 lakh-mark to reach 1,80,298. Mumbai city’s death toll rose to 4,631. Vile Parle resident Ajay Nadkarni, a bank employee who had been working from home at the time, was anxious. “What if something happens to mum?” Nadkarni was visibly uneasy. “My 71-year-old mother, Vidya Nadkarni, was diagnosed with Stage 4 Chronic Kidney Disease some three-and-a-half years ago. Her condition is delicate, she needs dialysis three times a week. After Andheri’s Criti Care Hospital was turned into a COVID-19 facility, we moved her dialysis sessions to KLS Hospital in Irla. COVID-19 numbers were sky-rocketing, and there was no sign of a vaccine anytime soon,” shares the 33-year-old. So, he turned to the Internet. How could he save his immunocompromised (impaired immune system) mother from COVID?

A study, published on the preprint server medRxiv in June 2020, showed that the odds of severe COVID-19 infection, ventilatory support requirement, and death are reduced with an influenza vaccine. The study, which involved over 92,000 patients with COVID-19 in Brazil, also reported lower mortality following the flu vaccination. It stated: “The researchers found that in the non-immunised group [those who had not taken a flu shot], the COVID-19 mortality rose from about 14 per cent in the under-10 age group to 84 per cent among those aged 90 years or more. However, mortality was lower in all age groups in the immunised group [those who had taken a flu shot], with the risk being 17 per cent lower in the 10-19 age group, and 3 per cent less in those aged 90 years and more.”

The answer was simple—influenza vaccine. “I did research and found that people who had already taken a flu shot were at lesser risk of contracting COVID-19. My mother’s nephrologist also recommended the flu shot. So, when our family doctor called, my entire family of six members—mum, 79-year-old father, 81-year-old uncle, my wife and three-year-old daughter, including myself—went to take our annual flu shot,” Nadkarni recalls.

Regular tests point that none of them have potent antibodies yet. Conclusion: The Nadkarnis have never been diagnosed with COVID-19.

The Bohra community held a flu vaccination drive in Marol in July 2020, where some 400 to 500 doses were administered per day. Credit/The Dawoodi Bohras

In January 2021, Dr Amol Annadate, a paediatrician from Vaijapur in Aurangabad district, and Dr Anil Mokashi, a paediatrician from Baramati in Pune district, initiated an observational study to locate the correlation between COVID-19 infection and mortality in those who have been vaccinated for common flu. The duo has observed that cases of COVID-19 were lower in those who had been vaccinated for influenza compared to those who were not. Mortalities have not been reported among those who were vaccinated for flu. Dr Annadate explains, “Since it is an ongoing study, we are still calling it a hypothesis. But, the aim is to prove it statistically. So far, we have acquired data from 1,500 flu recipients across India, 80 per cent of these case studies are from Maharashtra. Through telephonic interviews, we have found that a flu vaccine, which is largely available and is deemed safe, is protecting people against COVID-19."

"For instance, when we observed a group of 30, of which two had died of COVID-19, we found that the deceased had not taken their flu shots. Therefore, we have a simple solution—if we start vaccinating people against the flu, everyone has a chance at surviving COVID-19.”

The flu vaccine is to be taken on an annual basis to prevent common cold and influenza. But, who is advised to take this vaccine? Dr Mokashi says, “Every human being on this planet is eligible for a flu shot. It is specifically advised to the paediatric group till 18 years of age, and the geriatric population, who are vulnerable to catching several infections. The flu shots are also recommended for people with compromised immunities, such as diabetic patients, people with heart ailments, blood pressure, and so on. Since this vaccine ensures protection only for a year, it is suggested that everyone take it annually.”

But, what is the correlation between flu and COVID-19? Seasonal influenza, commonly called the flu, is caused by influenza viruses, which infect the respiratory tract (i.e., the nose, throat, lungs). Unlike many other viral respiratory infections, such as the common cold, the flu can cause severe illness and life-threatening complications in many people. Influenza occurs globally with an annual attack rate estimated at 5 to 10 per cent in adults and 20 to 30 per cent in children.

“Influenza is a SARS virus, COVID-19 is also a SARS virus. They are cousins from the same viral family. A COVID-19 vaccine will protect you for a year, a flu shot will also protect you for a year. But, till you are not eligible for a COVID-19 jab, you must improve your immunity by taking an influenza shot instead. Our study proves exactly this—there were no deaths in the group of immunised that we have interviewed so far. They either got a milder form of COVID-19 or did not get infected at all. Isn’t that wonderful?” Dr Mokashi exclaims.

The two illnesses have such similar early symptoms that people who get the flu may mistakenly think they have COVID-19, says Dr Gregory Poland, an infectious disease specialist at Mayo Clinic. Only a test can tell the two apart.

As per the National Centre for Disease Control, in India, up to 2,752 people fell ill and 44 people died due to flu in 2020, while in 2021, seven cases and zero deaths due to flu have been reported so far.

In a paper published in 2019 on Social Science Research Network—an open-access online repository of pre-prints papers dedicated to social sciences—by the California Polytechnic State University, researchers reveal that even during a normal, non-pandemic year, a one per cent increase in flu vaccinations can save around 800 lives and prevent the loss of about 14.5 million work-hours due to illness and absenteeism.

In their ongoing study, Dr Annadate and Dr Mokashi have made another interesting observation. Their findings so far reveal that cases of COVID-19 infections and mortalities were lowest in the Bohra Muslim community. The two doctors felt that this could be because the Bohra community has been conducting mass flu vaccination camps across the world for their members. This spurred the duo to undertake this research in the first place. Dr Annadate explains, “Both alpha- and beta-thalassemia are more prevalent in tropical and subtropical regions of the world, particularly where malaria is, or has been, endemic. In India, for instance, several ethnic groups have a much higher prevalence of thalassemia. Similarly, we found a pattern among members of the Bohra Muslim community. A doctor in Pune, who is a Bohra Muslim, was the first person to tell us that the community members are protected against COVID-19 due to mass flu vaccination camps held annually for three years across the world. Mortality due to COVID-19 is almost nil in this community.”

A small and closely knit community, Dawoodi Bohra Muslims, attend many congregations every year. Such meetings could potentially be responsible for transmission of multiple viruses. And therefore, much before the COVID-19 pandemic set in, the spiritual leader of the group decided to launch the initiative to protect their own from the flu. A member of the community, Dr Iqbal Bagasrawala, Associate Medical Director at Saifee Hospital, confirms this saying, “Flu is an infection which is transmitted by coughing or sneezing. In the Dawoodi Bohra community, we have many congregations where groups of people assemble together. Around three years ago, the Syedna recommended that everyone over the age of 18 years should get an annual flu shot so that the risk of transmission is reduced. This is done so that the younger generation does not lose working days, and the elderly do not land up in hospitals. This has proved to be a good suggestion, as after the vaccination drives began, the incidence of common cold has reduced in the community significantly. I cannot say there is 100 percent compliance, but a fair number of the members of the community regularly get their flu shots.”

Dr Bagasrawala says that currently one flu shot costs Rs 1,400 in India. “Due to bulk orders, our community has managed to get it subsidised to half the cost. We regularly educate and motivate the community to take their flu shots annually and make it easily accessible to the entire community across the country.”

He, however, believes that nationwide awareness on the flu shot should be made a priority. “There is a common notion among the general public that if I get a common cold, I can get away with it. Why then do I need a vaccine? What people don’t realise is that flu shots are extremely important to keep viruses at bay,” he adds.

Dr Annadate stresses on the need to raise awareness on flu shots in the country. “Awareness on flu vaccine is very less here in India. In the US, on the other hand, everyone takes it every year as mortality from flu is very high there.” According to the Centers for Disease Control and Prevention (CDC), between 5 per cent and 20 per cent of the US population are infected with the influenza each year; these infections result in an average of approximately 2,00,000 hospitalisations and over 20,000 deaths. “The problem is that India is a vaccine-illiterate country. It is ironical, because it is known for creating many vaccines in the past, including for COVID-19. We urge everyone to take their flu shot starting this year.”

The WHO is yet to confirm cross immunity between the two viruses.

How does the flu spread?
Seasonal influenza spreads easily and can sweep through schools, nursing homes, businesses or towns. When an infected person coughs, infected droplets get into the air and another person can breathe them in and be exposed. The virus can also be spread by hands contaminated with influenza viruses. To prevent transmission, people should cover their mouth and nose with a tissue when coughing, and wash their hands regularly.

What are the many complications of flu?
Complications of flu can include bacterial pneumonia, ear infections, sinus infections, dehydration and worsening of congestive heart failure, asthma or diabetes. Stomach symptoms such as vomiting, diarrhoea and nausea can also occur, but are known to be more common in children.

What does the quadrivalent flu vaccine in India contain?
The quadrivalent vaccine will contain four influenza virus strains (two A subtypes and two B subtypes—H1N1 and H3N2, and Victoria and Yamagata respectively).
Credit: Serum Institute of India, Pune

Next Story : Juhu baker starts business to normalise the idea of tea cakes