The other Diwalis! Storytellers narrate legends beyond Ram's return

Not everyone in India celebrates Diwali for the return of Ram to Ayodhya. The festival of lights is celebrated for special reasons ranging from gaining of wealth and beating death to acknowledging freedom 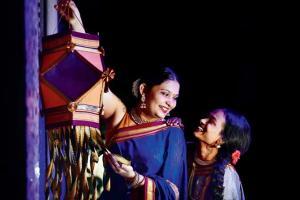 Residents of Byculla dress in finery and hang the customary kandeel, on Saturday. Pic/ Bipin Kokate 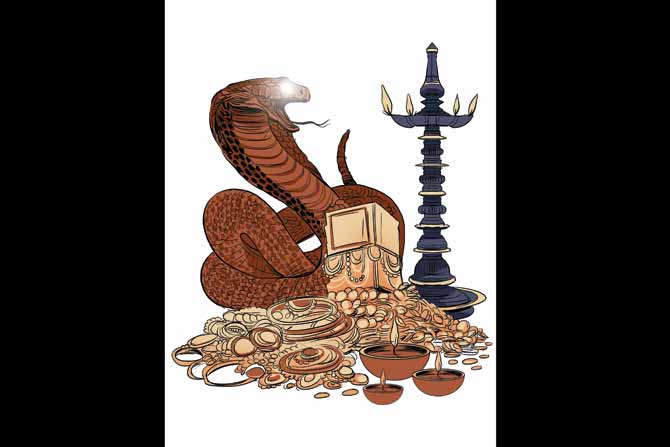 THE "dhan" of Dhanteras (or Dhanatrayodashi) is leading, triggering tiny tales around it. On this day, Goddess Lakshmi is said to have emerged from the samudramanthan—the churning of the ocean of milk—and hence she, the dhan, as the Goddess of good fortune is worshipped in all its forms of wealth.

Another story dedicates Dhanteras to Dhanvantari, the divine doctor who also arose from the samudra manthan, holding an urn—kalasha of amrit (the elixir of life) in one hand, and the sacred text about Ayurveda in the other.

The reason for buying gold and silver on this day is connected to an ancient legend. The young prince of King Hima was prophecised to die of a snake bite on the fourth day after his wedding. The bride decided to put up a clever fight to save her husband. On the fateful night, she did not allow him to fall asleep by recounting to him a series of stories and singing songs. Meanwhile, she had piled a dazzling heap of gold coins, jewels, ornaments and silverware at the threshold of the bedchamber and lit the entire palace with oil lamps and sky lanterns. When Yama, the God of Death glided inside, in the form of a snake, he could not enter the place as he was blinded by the glitter. He curled himself on top of the heap and, instead, listened to the stories and songs sung by the young wife all through the night and silently slithered away at the wake of dawn. The time of death had passed, thereby giving the prince a fresh lease of life. That is why Dhanteras is also known as Yamadeepdaan.

To this day, it is believed that new "dhan" (wealth) or some form of precious metal is a sign of good luck.

This is a popular folktale set around Diwali, about goddess Lakshmi. The story is set in autumn, and the onset of winter.

Long ago, in ancient India, bordered by rivers and forests, ruled a king in a fortified palace. Each year for Diwali, the king would gift the queen expensive gifts.

One particular year, he gave the queen a beautiful necklace made of pearls. She was overjoyed. It was the queen's custom to bathe in the river that ran close to the palace grounds. That Diwali morning, while bathing in the river, she took off the necklace and left it on the riverbank and asked her handmaidens to guard it. A crow sitting on a nearby tree got attracted to the necklace, swooped down, picked it up and flew off from the manicured palace grounds, to the poorest part of the kingdom and dropped the necklace outside a washerwoman's hut, while she was busy at work.

The washerwoman did not live alone. She lived with her constant companion, poverty.

She was collecting laundry in the village when she heard the king's men proclaiming that the queen's necklace had gone missing. Returning home, she spotted something shining on the doorstep and ran to pick it up and realised it was the missing pearl necklace. She wondered what to do with it. She came up with a brilliant plan. 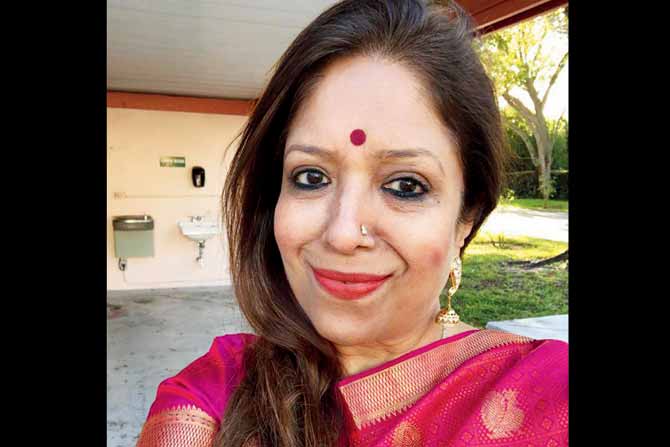 The washerwoman made her way to the palace. She was escorted directly to the king after she disclosed that she had the pearl necklace. Overjoyed, the king praised her honesty. The queen was delighted to have her necklace back. When the king offered the washerwoman money as a reward, she refused, asking instead for a very unusual favour.

The favour being: Only her hut would be lit on Diwali night. The entire kingdom and palace would remain in darkness. The king agreed.

That Diwali night, the washerwoman lit lamps outside the hut and expectantly waited for Lakshmi. Darkness fell and goddess Lakshmi walked through the land, but there were no lamps to light her way—none except the solitary light outside the home of the washerwoman. Lakshmi ran to the washerwoman's hut in fear and desperation.

The clever washerwoman was waiting for just this moment to strike a bargain. The condition was that Lakshmi would have to stay with her for seven generations to come. Poverty, meanwhile, could not bear to share her home with Lakshmi.

Thus, the clever dhobin got rid of poverty and multiplied her fortune for seven generations and welcomed Lakshmi into her home and was rewarded with happiness, wealth and prosperity for generations to come.

'Historical events were associated with Diwali over time'

Originally, Diwali began as a fertility festival, says Dr Satish Kapoor, educationist and historian. "But, as time passed, a number of important historical events came to be associated with it. Its popularity with the people at large, gave birth to a number of legends."

Dr Kapoor adds that according to one account, the festival is celebrated to commemorate the birth of goddess Lakshmi from the ocean of milk. When the process of churning the ocean ended, she arose to put a garland of wild flowers round the neck of Lord Vishnu, as in a marriage, and bestowed prosperity on the devas, who had lost their kingdom.

The earliest historical reference to Diwali, he says, occurs in Kamasutra where it is described as Yaksharatri. "A number of Puranas such as Nilamata, Aditya, Padma, Varaha, Brahma and Devi refer to the celebration of this festival. According to Skanda Purana, people worshipped Bali at night by drawing his image on the ground, and then exchanged gifts and lit up their houses with earthen lamps. In Rajmartanda, Bhoja described it as sukharatri, i.e. the night which bestows happiness, and laid emphasis on the worship of Lakshmi." The seventh century play Nagananda by Harsha gives a detailed description of a festival named Dipa Pratipadutsava, which has been identified with modern-day Diwali.

The festival has also been considered an auspicious day to start new ventures. And so, emperor Vikramaditya ascended the throne on Diwali. Various tribals of India regard Diwali either as a festival to invoke the blessings of gods, or as a fit occasion for scaring away evil spirits from homes and fields. Till the end of the 19th century, farmers in certain parts of India observed a ritual, which was similar to the Roman worship of God Stericulius. Together, they went to their fields, bowed before crops, sacrificed animals, made offerings to dung-heaps, and prayed for their general well-being.

References to the celebration of Diwali occur in a number of historical works which include among others, Soma Deva Surya's Yashasatilakachampu, Merutunga's Prabandhachintamani, Hemachandras' Deshinamamala, and Jimutavahana's Kavyaviveka. The best description of this festival occurs in Abul Fazal's Ain-i-Akbari, which likens it to Shab-i-Barat, the night of Prophet Hazrat Mohammad's ascent to Heaven. It is celebrated on the 14th of Shabban, the eighth Arabic month. Mughal emperor Jehangir took part in Diwali celebrations, and even gambled on the occasion. Shahjahan and Aurangzeb were, however, not interested in this festival.

Kapoor says that over the years, the festival has gained prominence among different communities for a number of reasons. The Jains celebrate it as the Nirvana day of Lord Mahavira. The Sikhs view the day as holy because Sri Hargobind Sahib, the sixth Sikh guru, was released from detention from the Gwalior Fort on this day by Emperor Jehangir. Again, on this day, Bhai Mani Singh was martyred by Zakaria Khan, and Maharaja Ranjit Singh presented a costly silver gift to Darbar Sahib. Arya Samajis celebrate it because Swami Dayananda attained mahasamadhi on Diwali. Likewise, Swami Ramatirtha left his mortal frame on this day.

'Here's why oil baths are a tradition on Naraka Chatutrdhashi'

Narakasura showed up in the Krita Yuga when Vishnu incarnated as the boar, Varaha, and rescued Bhumidevi from the clutches of the rapacious Hiranyaksha and restored her to her rightful position. The only sign that Varaha had exerted himself on behalf of his consort was a single bead of perspiration, which rolled off his tusk and fell on Bhumidevi. A fully grown asura emerged from this precious drop. Instead of being grossed out, Bhumidevi's heart burgeoned with love for her son. She urged Varaha to grant him the gift of immortality. The avatar demurred and wriggled his way out of the conundrum by declaring that Naraka's life would be forfeit only if she herself chose to take it. Mother and son were chuffed!

His parents urged him to behave, but like a typical spoilt brat, he listened with half-an-ear and took off to do his own thing. This included declaring war on the three worlds, laying waste to everything in his immediate vicinity and amassing indecent amounts of treasure, which he stored for purposes of personal enjoyment in his formidable kingdom of Pragjyotishapura. Then, sometime in the Dvaparayuga he took his marauding ways to new extremes when he raided Amaravati, capital of the Devas, and captured 16,000 celestial damsels to round out his seraglio which was already filled to overflowing. But, even that was not the proverbial straw, which did a number on the camel's back.

Espying a pair of sparkling earrings suffused with splendid radiance, adorning Aditi, the mother of the Devas, the miscreant snatched it right off her ears in a shocking display of unworthy behaviour even by his own execrable standards. Led by Indra, the Devas repaired post haste to Dwaraka, where Krishna was chilling with his wife Satyabhama. Too full of their own grievances to pay heed to their couple time, the celestials moaned and groaned in earnest about the evils perpetuated by Naraka.

Krishna rose to his feet and promised to do the needful if only to get them to quit their infernal whining.

Summoning Garuda, Krishna was all set to teach Naraka a lesson in manners, when he noticed Satyabhama sulking over their ruined date. Playfully, he yanked her by the waist and whisked her away on Garuda and they carried on romancing en route to Pragjyotishapura, where Krishna proceeded to make short work of the formidable defenses encircling Naraka's pad, which included jagged rocks, a ring of fire and circle of spears. He even took out Naraka's terrifying general, Mura, while Satyabhama reassured herself that it was not the most romantic of dates, but certainly an exciting one.

Bummed beyond belief, Naraka hurled a trident at Krishna, which conked him out, much to the anger of Satyabhama, who was heartily sick of folks keen on pissing over her love life. Attacking Naraka with a vengeance she inflicted a mortal wound on him. Krishna recovered instantaneously and lifted the fog of her ignorance long enough for her to understand that she was an incarnation of Bhumidevi and, therefore, Naraka's mum. Naraka saw the truth too, and they all decided it was best to celebrate the occasion with fireworks, sweets, new clothes and oil baths, instead of mourning in unnecessarily melodramatic fashion. And, it has been so, ever since.

Next Story : The 'my' touch to Diwali decor