When AI is your artistic collaborator

Can creativity, originally considered an innate human ability, be mimicked by technology? A new breed of artists are using Artificial Intelligence and art to co-create alternate digital realities and futures 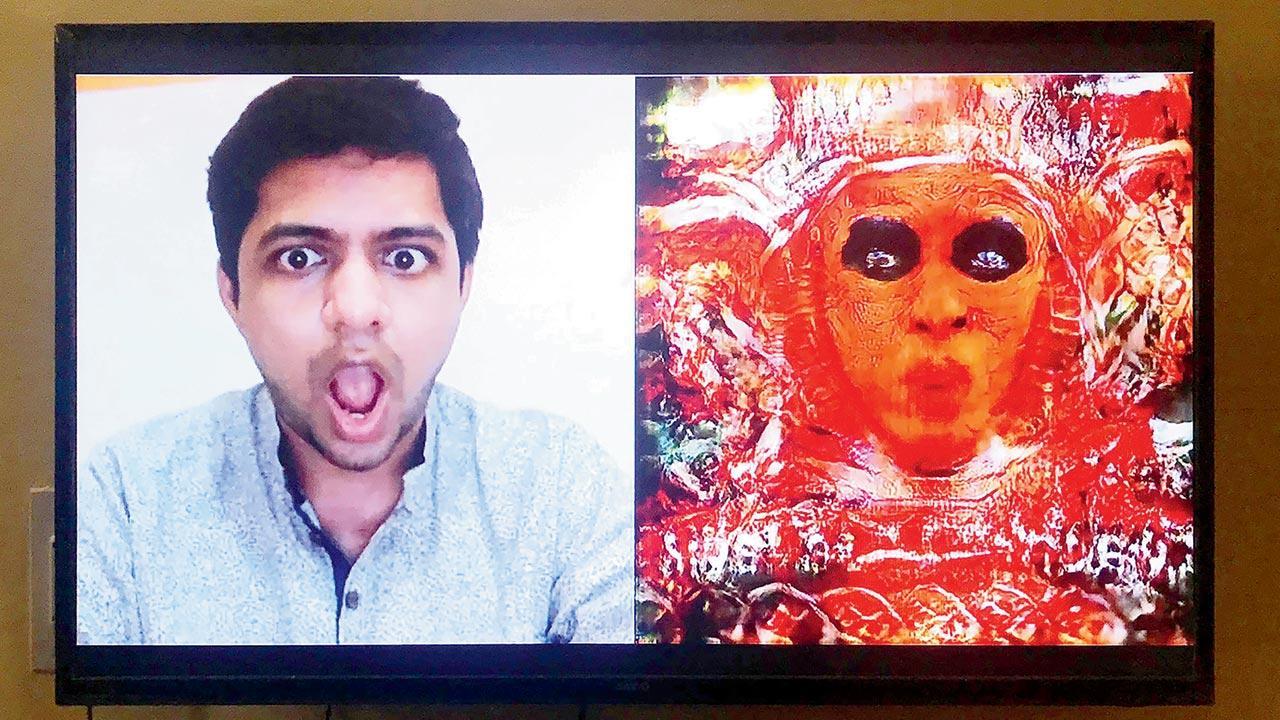 
Which song will we sing to the future? How will the future listen to the present? What would the conversation be like between humans and post-human beings? These are some of the questions that have occupied Mumbai-based artist Sahej Rahal as he has worked with Artificial Intelligence (AI) programmes to create art, the aim of this collaboration being to collectively imagine better worlds. Rahal, a long-time fan of sci-fi films, who graduated from the Rachana Sansad Academy of Fine Art, Mumbai, and is one of the fellows of Digital Earth’s 2020-2021 fellowship, creates fictional, mythological worlds which take the shape of sculptures, performances, films, comics and paintings. What led him to AI programmes, he says, was the question:  what would happen if the creatures that he was creating had an active role in the narrative.

“Imagine that there’s this multiple-limbed creature and each of its limbs has a script attached to it,” Rahal explains. “These scripts are capable of listening to sounds from the computer’s microphone and that audio feedback interrupts the motion of these creatures.” Rahal invited Hindustani classical singer friends to sing to the programmes, and says that the creatures responded differently to the music, appearing once to bow down to each other to an abstract rendition of the raga Bhairavi. “The interaction that is produced is randomised and changes each time with new inputs. So essentially, what you have are a set of virtual worlds that are capable of listening to our world.”

Artist Sahej Rahal says that the aim of AI art is to imagine better worlds with the non-human minds that we have created. Pic/Nimesh Dave

Bengaluru-based Fabin Rasheed, a product innovator at Adobe, working in the sphere of AI and creativity to reimagine the future of machine-learning-based creation tools, calls himself an adventurer rather than planner. He says it was the element of surprise that attracted him to AI art. “We really couldn’t predict a lot of what would come out as output. We find surprising new expressions created by the machine, which we can then ‘curate to create.’”

One of Rasheed’s first AI art projects was Auria Kathi, a social media bot that wrote a poem, created an image based on the poem and finally styled the image. This was then automatically posted by the bot to social media. It was created in collaboration with friend Sleeba Paul and exhibited at the Florence Biennale 2019.

The inception of AI art, believes Harshit Agrawal, took place around 2015 with the release of the Google DeepDream, a computer vision programme interpreting drawings and generating very surreal outputs that people hadn’t seen before. “That, I think, in some sense gave birth to this modern-day AI art movement,” he says. The programme brought a new element of collective understanding to the process. “It piqued my interest in the subject for the ability to create art for the first time based on the collective understanding of things with data. We could find out how a million people thought of a certain concept and then use that understanding to create art. There was also the fact that you could teach this other agent [the machine] this collective understanding.”

Agrawal, who divides his time between Mumbai and Bengaluru, studied design at IIT Guwahati and has a Masters degree from MIT Media Lab. He has been working with AI and other forms of emerging technology for a while, keen on going beyond its utilitarian purpose to find the poetry behind technology.

Auria Kathi, an AI social bot which writes a poem, creates an image from the poem, styles it and posts to social media for a year, by Fabin Rasheed and Sleeba Paul. And Formless, a 3D sculpture investigating the entity behind the myriad masks that we see around us and its relation to technology, by Fabin Rasheed and George Boya. Pics courtesy/Fabin Rasheed

Agrawal speaks of a political influence of the global north even in the arts space, there being more representation of artists from the West along with better archiving of their work. “AI art started having western European aesthetics, which is why I was inspired to incorporate Indian art into AI art conversations,” he says.

Agrawal developed the series, Masked Reality, around the theme of face painting cultures in India, working with Theyyam and Kathakali dance forms and the intricate face painting rituals before these performances. He explains that he trained a machine to understand that visual language, so that it could transform any facial input into a masked face, enabling audience members to see themselves as the dancers. The result, he says, was an immediate sense of connect with a very traditional Indian identity. Moreover, audience members saw themselves in female (Kathakali) and male (Theyyam) forms simultaneously, resulting in a performance on gender along with one of art. Agrawal further points out that Kathakali was traditionally meant for the higher castes, while Theyyam, performed by tribal dancers, was kept outside worship spaces. Technology was thus used in the project not only to bring traditional visual languages to contemporary audiences, but also to challenge pre-existing societal reservations.

Agrawal, who was the only Indian artist at Nature Morte’s Gradient Descent exhibition in 2018, the first ever AI-only exhibition in a contemporary art gallery, is also the curator of Intertwined Intelligences, Terrain.Art’s AI NFT show that opened on July 31, exploring the importance of a natively digital future and our deep involvement with technology. “The artists in the show are working with common themes like plants, landscapes, human figures and portraits but seeing how these common realities can be co-imagined as alternate digital realities moving forward,” Agrawal elaborates. “AI doesn’t only treat digital as a tool of creation, but becomes a co-creator in the dialogue.”

Next Story : The Other (Fit) Shroff