Founded by Gehlot and his family in 2002 in Rajasthan, Utkarsh classes was an offline education destination where students got educated to prepare for competitive exams and other major government exams 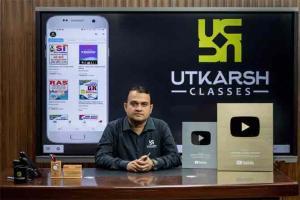 
We are living in a world where everyone is surrounded by digital technology and the digital revolution is reaching new heights. Rightly said by Mr Nirmal Gehlot, “In the era of smart gadgets and evolution of digital innovation, technology will play the most important role towards betterment of the educational process.” He is the man behind the Utkarsh classes group in Jodhpur, Rajasthan. He is bridging the education and technology together and has put in his best efforts to bring smart education in the country. However, the government is already working on smart education policy in India, which will bring in a lot of edutech companies in India.

Founded by Gehlot and his family in 2002 in Rajasthan, Utkarsh classes was an offline education destination where students got educated to prepare for competitive exams and other major government exams. The classes helped and succeeded in bringing out many private jobs aspirants thus establishing its goodwill of more than 17 years of proven tutorials. Utkarsh group commands the biggest market share of approx 68% in competitive exam aspirants in Rajasthan. Nirmal Gehlot has always gone his way out for the betterment of students by providing them with expert faculties, observation mechanism and the latest technology in the edutech segment.


The past 4 years Utkarsh classes have set a benchmark for itself. In 2015, they started using smart classroom technology which was followed by online education with smart practice sessions in 2016. The next year in 2017 saw the birth of Utkarsh Studios and in the year 2018, Gehlot came up with innovation and brought a mobile app education system of Utkarsh classes for its registered students. Besides this, they also launched a video streaming mobile app with more than 20,000 lectures library available for its registered users. The mobile app has been downloaded by more than 5 lakh users and has awarded more than 20,000 paid registered users all over India. Having its presence on YouTube as well, Utkarsh Classes Jodhpur has more than 2.45 million subscribers which have recorded with an average of 6.92 lakh views for many of its trendsetter video lessons.

Moreover, Utkarsh classes group has not diluted stake to outsiders or investors and is completely funded by the founders as a positive revenue business model. Mr Gehlot is running the education institute for about two decades with more than 300 online faculties, dedicated IT team, ultramodern classrooms, live session stations with pan India presence. The edutech market in India was rightly discovered by the advisors of Utkarsh advisory board with the introduction of a mobile app, online streaming classes, and live education sessions. Nirmal Gehlot’s classes are now considered as the one-stop destination where students prepare themselves for competitive exams, civil services exams, and other competitive exams. There’s no doubt in saying that Utkarsh classes is building a better tomorrow by training today’s young generation in the best possible ways.

Next Story : Artificial Intelligence can predict if you will die within next year