The green sea turtle, which was nursed back to health after fighting a gastro-intestinal infection, was released into the sea at Dahanu 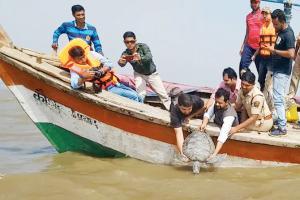 The turtle was released at Dahanu


Women's Day was a happy one for a female of another species. Tara, the green sea turtle from Taraporewala Aquarium, who was nursed back to health, was released into the sea on Friday.

In June 2018, mid-day had done a story (Taraporewala's last turtle fights for life), about the turtle, which was ill. The green sea turtle was treated by Dr Dinesh Vinherkar, a turtle specialist veterinarian, who is a consultant associated with the Injured Sea Turtle and Wildlife Treatment Centre that runs on the premises of the Dahanu Forest Division. Volunteers associated with NGO Wildlife Conservation and Animal Welfare Association (WCAWA) also played an important role in nursing the turtle back to health. After this, she was sent back to Taraporewala Aquarium.

Setting Tara free
Due to the lack of space in the aquarium, and as the turtle, which was about 5-6 years old and weighed 12 kgs, was completely fit, the authorities approached the Dahanu Forest Division, and expressed their desire to release her in the sea.

Dr Vinherkar said, "Last year the condition of the turtle was very critical but after treating it properly at our Centre she was sent back to the aquarium. On January 21, the turtle was handed back to us to start the process for its release."

A Dahanu Forest Division team along with WCAWA volunteers started the process for the release, and monitored the health of the turtle, along with its ability to survive when it was released in the sea.

"For more than a month, our team closely monitored the turtle on various parameters including health, ability to swim in the tank and sea, whether it consumed food properly etc. The turtle passed all the tests and finally on Friday she was successfully released into the sea at Dahanu," added Vinherkar.