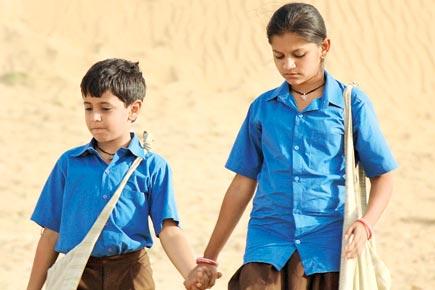 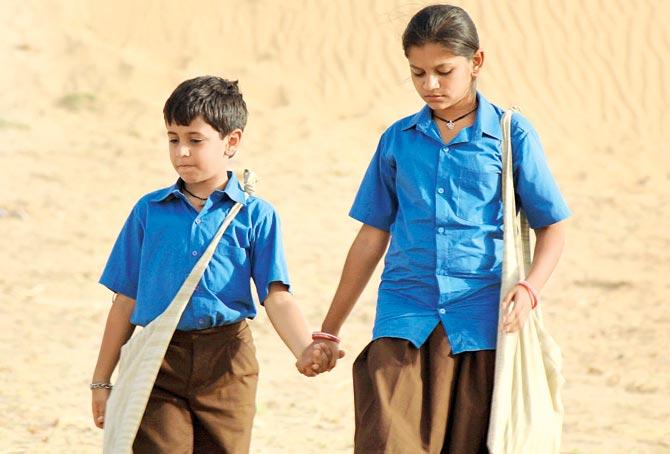 At the outset, 'Dhanak' looks like one of those typical films designed for festivals and to capture the attention of NRIs. There is a desert, there are colourful outfits, there is poverty, there is folk music and of course, there are kids tugging at your heartstrings. But thankfully, 'Dhanak' goes much beyond what one expected of it and actually manages to kind of temporarily transport you to a magical place where hopes don't die and the most impossible of wishes come true.

Pari (Hetal Gada) has a blind brother, Chotu (Krrish Chhabria). Pari loves Chotu and Shah Rukh Khan. Chhotu loves Pari and Salman Khan. It is to director-writer Nagesh Kukunoor's credit that even though he's dealing with two children as protagonists, he's fleshed out their distinct characters rather well. Pari is the patient older sister with an undying devotion towards her younger brother and with one mission in her life: to get Chhotu's eyesight restored. Chhotu is a little boy of eight, but with a huge amount of self-respect and he flies into a rage every time his handicap is pointed out to him. Chhotu loves to talk, and talk big. Pari loves to reprimand him for saying more than he should. Pari's last hope is Shah Rukh Khan, who she's convinced will help her brother see the world. The two run away from home to meet Khan.

The film largely works for the little tender moments between the two siblings. The unconditional love that Pari displays towards her brother through their everyday dealings and simple dialogues (thankfully, unlike a lot of other films, the kids are not made to do adult-speak) warms the cockles of one's heart through this two-hour movie. Add to it, this part fairy taleish, part adventurous feel that the narration provides enhances the allure of the film.

However, there are certain sequences, like the one involving veteran actress Bharati Achrekar as a blind visionary, that seem too contrived and convoluted.

A lot of credit for making this film so endearing goes to the child actors' performances.

While Krrish with his childlike charm steals your heart, it is Hetal who stands out with a stunningly natural performer. The rest of the cast provide good support. Music is fabulous too.

Next Story : I have never downloaded a film on torrent, says Anurag Kashyap