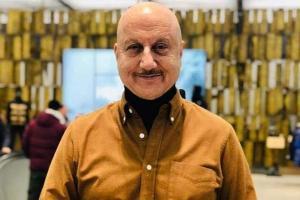 
Veteran Bollywood actor Anupam Kher has opened up on the death of Sushant Singh Rajput. Kher feels, after so many ups and downs, and conspiracy theories, the case should reach a logical conclusion because his family and fans deserve to know the truth.

"Sushant's family and fans deserve to know the truth. So much has been said, there are so many conspiracy theories, but it is not about who stands on which side anymore, it is about ensuring, that this case reaches a logical conclusion. We must know the truth. #JusticeforSushant," tweeted Anupam Kher from his verified account on Tuesday.

Sushant’s family & fans deserves to know the truth. So much has been said, there are so many conspiracy theories, but it is not about who stands on which side anymore, it is about ensuring, that this case reaches a logical conclusion. We must know the truth.ðu00c2u009fu00c2u0099u00c2u008f#JusticeforSushant pic.twitter.com/leL6ItKFuu

The veteran actor also posted a video where he speaks in Hindi. His words translate to: "From June 14 till now, after so many ups and downs, where Sushant Singh Rajput's case has reached, keeping mum on this anymore is like shutting your eyes. I haven't spoken on this topic till now. But now the situation has become such that without blaming anyone I'd like to say that it is our responsibility to take this to a logical conclusion. He was someone's son, someone's brother.

As a co-actor, as a human being I feel, he did a very good job as an actor. It is not necessary to criticise anyone at this moment but it is important to find a logical conclusion to his death. It should be found out who is guilty and who is not. There are 50,000 theories and we may or may not agree to them, that's different, but his family and relatives who are fighting for justice, we should make them feel that we are with them. Keeping your eyes shut is a sign of cowardice and it is not good to be a coward."

Next Story : Maneesh to direct the third instalment of Salman-led Tiger franchise