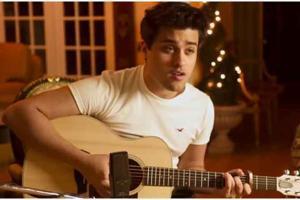 
Why you need to know about him:

American born singer, actor and dancer Aryaan Arora, has been going viral all over Instagram. He is known for posting covers of popular Indian songs with his own English remix to it. His videos have grossed more than 1 million views across social media.

Who he looks up to:

Aryaan looks up to artists such as the late Irfan Khan and Dev Patel:

"Irfan khan was such an inspiration for me as an actor and overall artist. His acting was so truthful and subtle and I always admired his humbleness. It really hurt me to hear about his passing but his legacy will live on forever and the mark he left on the international film industry is something I will always be grateful for as it has opened so many doors for Indian actors here"

He had stated: "Always wanted young Indian musicians like me to pick up the guitar & do their own thing. Check out this cover of #Control by @_aryaanarora! You have a really nice vibe brother, keep it going"

This was followed by many more of Aryaan's posts going viral all over the internet and getting shared by many famous celebrities in the industry.

Aryaan Arora, is currently studying at the prestigious NYU Tisch School of the Arts where he is currently studying acting and film-making. Although he is receiving a lot of recognition for his musical skills, he is also an actor, filmmaker, and dancer. He made his debut as an actor in America on one of the biggest Hollywood Television broadcasting companies, "ABC", which is a flagship property of Walt Disney Television.

Aryaan's season premiere episode of ABC's "What Would You Do" was also released on YouTube and went viral, grossing over 8.5 millions views!

Aryaan has officially signed with Prestige Management Group in New York, that represents him for his Film, Television, and Commercial projects.

He is currently working on his original album with New York based Rapper Jase Ford and Singer-Songwriter Claytonisokay aka Billy Miller, and looks forward to releasing it very soon.